What if Bay Area Baseball Really Did “Turn Back the Clock”? 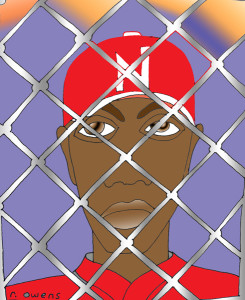 It’s a common marketing ploy among professional sports franchises to figuratively return their teams to a bygone era for a game, with an eye towards reaping enormous profits from the sale of “throwback” uniform jerseys and caps to fans.

The Oakland Athletics, who play in East Oakland at the O.co Coliseum, had their throwback event in a game against the Seattle Mariners. The A’s  turned back the clock to the 1950s, “for an afternoon of ’50s fun” that promised to pay tribute to the music and entertainment of the era.

The A’s wore the uniforms of their Pacific Coast League predecessors — the Oakland Oaks — and gave away dark blue, 1955-style Oaks caps,  emblazoned with a white, red-trimmed “O.”

1955 was a great year for rock ‘n’ roll, with Chuck Berry’s “Maybellene,” Little Richard’s “Tutti-Frutti,” and Little Walter’s “My Babe” on top of the charts. It was also the year the Philadelphia Athletics moved to Kansas City, where they played for the next 12 years before moving to Oakland.

The San Francisco Giants had their own throwback game against the Chicago Cubs at AT&T Park. The Giants “turned back the clock” 100 years and wore 1912-style uniforms featuring the old “NY” logos from when they were the New York Giants. The teams’ starting lineups for the game were announced by megaphone. And organ music filled the air, instead of the usual ear-grinding digital cacophony of dance music that blares from the ubiquitous loudspeakers.

The Giants even turned off the video on their humongous multimedia scoreboard, and employed a barbershop quartet to serenade the masses.

You might think the Giants would go ahead and roll back the clock to 1912 for something that mattered, like ticket prices, for example. They’ve pretty much sold out every game at AT&T Park (not to mention selling out on the naming rights) since the yard opened in 2000.

Don’t you think the Giants might want to give back a little something to the people who pay same of the highest ticket prices in the country, just to come to the park and play with their smart phones? Uh, nah.

Good the Giants didn’t really turn back the clock. Most of the players and probably many of the fans wouldn’t have been allowed to be at the game. That’s one little detail the Giants overlooked: Major League Baseball’s pre-1947 “color bar,” the quaint euphemism for overt, intolerant, institutional racism. MLB didn’t allow black players until around the middle of the last century, when Jackie Robinson was allowed to integrate the sport.

Of course, it wasn’t really a “color” bar. You could be brown-skinned — the effect of a nice suntan, perhaps. You just couldn’t be black. No matter what shade or color your skin might actually be.

Don’t tell the Giants, but everything was not hunky-dory in 1912. According to statistics from the Archives at Tuskegee Institute, there were 64 people were lynched in 1912, all but two of them black. Hate to think of what might have happened to Pablo Sandoval — the Giants’  lovable “Kung Fu Panda” who was accused of sexual assault— although no charges were filed— if he had been around in 1912.

Although baseball no longer excluded black players by the 1950s —  when Oakland’s minor-league Oaks team played in Emeryville —  the game still had a race problem, like America in general.  The Athletics left Kansas City for Oakland in 1968, and had finished in first place in their division five years in a row by 1975, when 27% of baseball’s rosters were African-American, according to an article by Bob Nightengale in the USA TODAY. By 2012, wrote Nightengale, the number of black players had tumbled to just 8.05%. Does the game still have a race problem?

Jemile Weeks, the Oakland A’s starting second baseman, has a grandfather who had played in the Negro Leagues, where talented black professionals were allowed — or obliged — to play before MLB unlocked its gates.  “He’s a real inspiration to me,” Weeks said of his grandfather to ESPN.com. “Just having that in your background, and understanding and listening to the stories, it inspires you even more.”

Should the Giants have made some effort — any effort — to recognize or acknowledge that their game didn’t even allow black players in 1912?  Not to mention acknowledging black fans, who probably would have had to sit in some “colored only” section of the park if they were allowed to attend at all.

Today there’s more of an economic segregation going on in professional sports. You won’t go to the game if you can’t afford the price of admission. For their 1950s throwback game, the A’s offered discounted plaza outfield tickets for $5 and field level seats for $19.55.  But the Giants’ website shows that the price of a left-field bleacher seat for their turn-back-the-century game was $54. Yes, fifty-four dollars. For a bleacher seat. And the price for a club-level outfield seat was $111. And don’t even think about getting a lousy beer unless you’ve got $10 on you.

If it was a “color bar” in 1912, it’s a “money bar” in 2012. Either way, it ensures that a lot of certain types of people won’t be seen at the old ball game.  Say what you will about the A’s and their supposedly run-down ball park and their desire to get out of Oakland. At least they bothered to give fans a break on ticket prices for their turn-back-the-clock game.