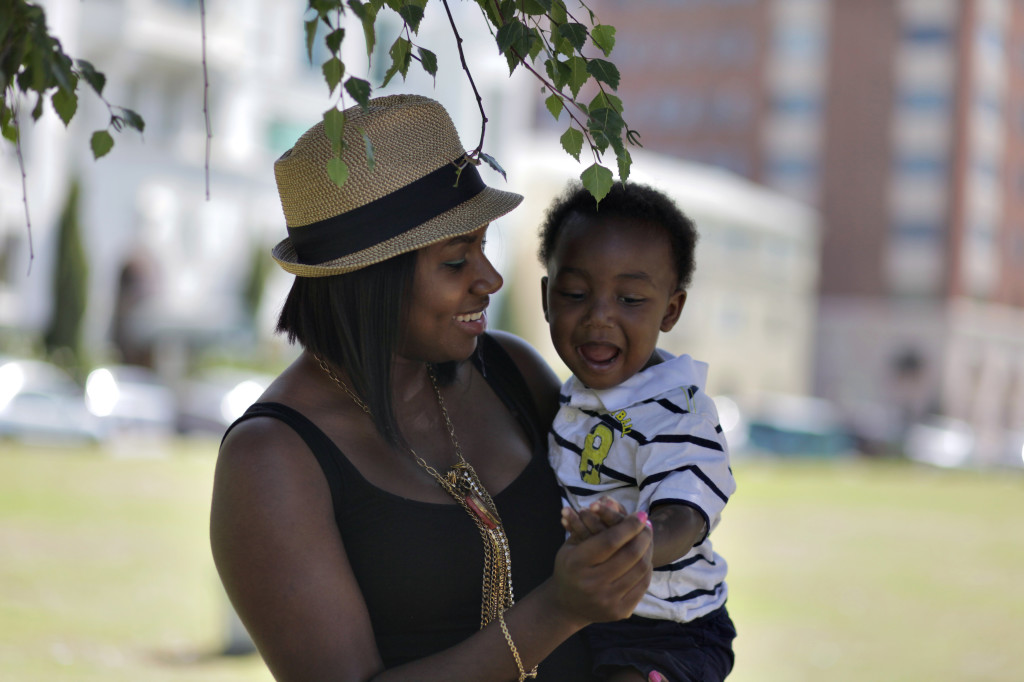 With a graduate degree and a great job on the horizon, Candase Chambers (here with her son Kyle) is challenging many stereotypes about single mothers. Photo: Katrina Davis, Oakland Voices 2012

Being a single mother can seem overwhelming. Having stereotypes defining who you should be might make you feel that there is nothing more for you than the life society says you  will have. In the latest Census, data showed that single mother families are 4 times more likely to be impoverished than families of a two parent household.

Candase, Ashley, and Tina are all single mothers. They are all college graduates who learned that just because they are a single parent doesn’t mean they can’t can’t reach their goals and keep pushing to have a better quality of life for themselves and their families.

“I think the stereotype of the single mom is that you’re angry, you’re a gold digger and that you’re trying to live off of the father of your child,” says Candase Chambers. Candase is 25 and she recently earned a Master’s in Communications from the Academy of Art, and prior to that, a BA from UC-Berkeley.

Candase and I sit down to talk as she’s making sure she has everything ready for her move to LA. She’s recently accepted a job offer to work for E! News. Her adorable 1 year-old son Kyle is playing with his toys in the corner.

Candase says she feels like she has to work hard to dispel the myth that single mothers are angry women that are trying to live off their babies’ fathers.

“Growing up,  there was just a negative connotation with being a single mom, and now that I am one, I’m not that stereotype. I feel like I have to work hard to dispel (the stereotype) for myself (as well), because when you meet new people the first thing people do is look at your ring finger and see you aren’t married.”

Candase states that being a single mother isn’t something she planned on. But when it happened, she said she just have to keep moving.

Even though Candase and Kyle are eager to start their new  lives in LA – and Candase couldn’t be more excited about her new dream job – she  also knows the change will come with some hardships. “If I was married, it would be like ‘Oh can you pick him up from school?,’ or ‘Can you give him a bath while I go do this?’ Everything is me. But at the same time, that just comes with it, so I don’t want to complain about it. When you’re a parent you just have to do stuff like that.” 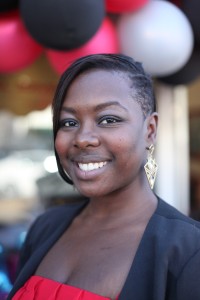 Candase isn’t the only woman in her family to have a child at a young age. In fact, Candase’s older sister Ashley had her daughter Genesis at the age of 14. “I think the stereotype is, especially if you have a baby at a young age like I did, that you either won’t graduate, you’ll just get your GED, or you’ll have more babies which will be more of a hardship for you.”

Ashley says that having her daughter at such a young age actually had the opposite effect. She was motivated to show society she wasn’t just another statistic. “I think society has done a good job at perpetuating the whole stereotype that single moms are just going to become dependent on society and government aid.”

Ashley says that being a pastor’s daughter already placed upon her an expectation to achieve. Although she admits that becoming pregnant at such an early age did show some naivety, she says it  motivated her  to show society that she was smarter than many people may have assumed.

“I knew people were going to judge me,” Ashley explains, “and it kind of helped me hold my head up when I achieved greater things for myself and my daughters.  So I can show her that despite whatever hardships you go through, you can still achieve a lot of great things.”

Even though she was a single parent at a young age, she was still able to graduate college and provide for her daughter. She says this was one of the great things she has accomplished as a single mother.

Tina Howerton is a single mother who volunteers as a peer advocate for Lifetime, an organization that specializes in helping low income single parents founded by single mothers. She says that there are many type of single mothers.  “Now you’re finding  single moms that have a degree, that maybe were in for-profit jobs for years, and maybe had a divorce (and) lost their job to the economy. There’s (also) young girls with babies.”

Tina hopes that the stereotypes of single moms are fading. “You’ve heard the stigma, ‘Oh, they’re having more babies to get more money.’ I don’t think that’s true at all and I would hope that that’s changing as time goes on.”

Lifetime wants the public to know that single moms are working, or trying hard – like many Americans – to find good jobs. Tina says the women she assists “are working, going to school. And the good thing about the group of single mothers today is that we are really focusing on our education. That gets instilled in our children and hopefully for the generation after our kids.”

Single mothers often have to work extra hard to accomplish their goals. Balancing life between raising children, holding down a job, and making good grades in school is not easy. But Tina says one of the many benefits of a single mother’s tenacity and drive is that she sets great examples for her children. “They’re growing up seeing all of us going to school and working and really struggling to make it better for our family.”

With the force of strong single mothers behind them, those children, Tina hopes, will have everything they need to succeed.