Students, Parents and Teachers Walk for Peace in Bella Vista 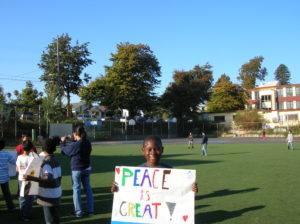 Oakland is a city that is really trying to find its way to peace.  There have been so many rallies, protests, vigils, and attempted legal remedies.  But the bullets still fly, and the makeshift memorials dot the streets, particularly in East and West Oakland. The tears flow, and it all seems, at times, so futile.  We continue to reap the bitter harvest of a culture steeped in violence.

But last week, I attended a neighborhood event  intended to sow the seeds of peace.  A Community Peace Walk, beginning and ending at Bella Vista Elementary School on 11th Avenue, featured a pre-k chorus, a sack race, a potluck, and many colorful posters drawn by students in kindergarten through 5th grade. Bella Vista students, parents, teachers and neighbors took a stroll around the block together, urged on by were told by Andrew Park – parent, neighbor and local pastor – who reminded them, “This is your neighborhood. Walk as if you own it!” 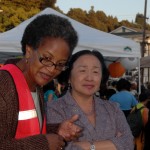 The spirit of the gathering was positive, focusing on creating a peaceful community. Oakland City Council Member Pat Kernighan spoke, as did Mayor Jean Quan. They talked about possibility, grace, love, and working together, without a litany of shooting and homicide statistics.

Bella Vista Principal Felicia Phillips also addressed the crowd. “Most of our 5th grade students last year revealed that while most of them felt safe at school, far fewer of them felt safe outside of school. Crime and violence not only impact our students’ physical and emotional safety, but it can impact their success as learners. And crime and violence also affect adults. Yet we all choose to continue to work here because we feel connected to the community and are willing to partner with the community to make it safer for everyone.”Having this event at Bella Vista is important to their school, Phillips explained. She said it was key “to let neighbors know – including those who do not have school-age children – that our school wants to do what it can to make sure the community is safe and that its residents are thriving.” 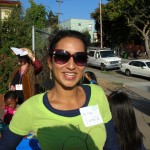 There were about 400 people who attended the multicultural, multi-racial event, including neighbor and Westlake Middle School English and History teacher, Samira Khattab. She said that her 8th grade students are “so impacted by the trauma of violence. Kids want to see an end to the violence.”

Park talked about “celebrating the peace.” He said the gathering was intended to be “an exercise in grace.  We’re not protesting.  Each step we take is a participation in grace, looking at others and seeing the beauty and grace in them.  That changes the ‘hood.”Bella Vista 5th grader Kahlea agreed.  She said she would tell youth who commit acts of violence to “Do the right thing! Have fun and stop being violent!”

“It was great because you don’t want to wake up to gunshots,” Said second grade student Ayah. “People should be nice.” 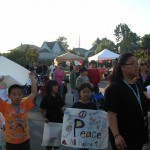 Councilwoman Kernighan agreed, and added, “if we are going to change the violence, there need to be grassroots movements, and people need to know they’re not alone.”

At least one student at the march had a very personal experience with violent crime. Mohamed, who attends Oakland High, was shot about a year ago as he was leaving a party. “A bullet doesn’t have a name on it,” he cautioned. “Live by the gun, die by the gun.”

A hopeful note is that the students I spoke to – 4th and 5th graders mostly – said that violence had not affected them directly. Bella Vista 4th grade teacher Leah Wachtel agreed that for the most part violence has been “outside the classroom,” although she added that sometimes older siblings have been shot.

As a teacher, I am thrilled to see this gathering at an elementary school, and would love to see one at every school in Oakland. With our younger students, we can hope to sow seeds for non-violent lives and teach the ideas of peaceful communities.  We also should not give up hope on our oldest students, even though they may sometimes seem to have resigned themselves. The youngest will always look up to the oldest, and we should give them the support, encouragement and resources to be worthy role models for those to whom they will someday pass the torch. 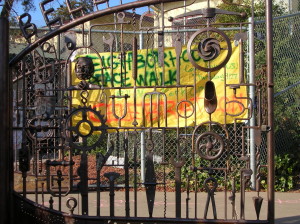