Teacher Profile: Artist Debbie Koppman Teaches Kids to Make Something from Nothing 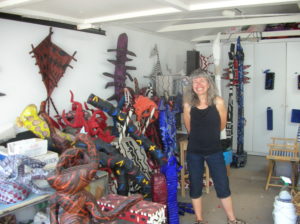 3-5, where students make art out of “trash and scavengeable materials.”

“At the beginning it was literally taking garbage and making something beautiful out of it,” Debbie said. “It’s a big thing to see how people make things out of nothing. I’m always thinking, ‘Isn’t that really cool?’”

Half of Debbie’s studio in her East Oakland home is overflowing with papier-mâché creatures, totem poles, and other forms that cannot be categorized. “I am influenced by ruins, crowns, ceremonial objects, connections to some kind of past.  But the things I make don’t look like the things I’ve seen, they look like they’re from the past but also from the future.” 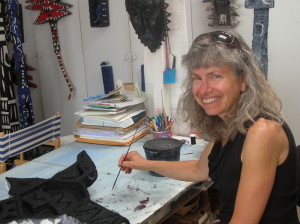 Debbie has been teaching kids and adults for 22 years, beginning in Puebla, Mexico, and later in Nicaragua and Peru. After returning to the US, she taught  at the Academy of Art and Diablo Valley College.

When She started 14 years ago at the Oakland Unified School District, she was teaching every student at Sequoia. Now a colleague handles the K-2 classes.

A non-credentialed teacher, Debbie is designated as an artist-in-residence – a position funded first by the California Arts Council and now by Oakland’s “Artists in Schools” program.

Her students are trained in what Debbie calls “observational drawing.” She also guides teachers in building lessons that integrate art across all of the students’ classes. “The artist residency is based on the idea that teachers are learning along with their kids,” Debbie explains. This year, she will go from room to room, pushing a cart filled with supplies. “This will help teachers incorporate more art into their instruction.”

Growing up in Queens, NY, It didn’t even occur to Debbie to become a teacher. She had very few – and mostly bad – art instructors. It was being on the road, not in classrooms, that inspired her career path. “My husband and I traveled a lot, and around 1987, we decided that we loved to be in other places, but we didn’t want to be tourists all the time.”

They settled in Puebla, Mexico, where she taught at the University of the Americas.  “I worked so hard. I was putting so much more effort into teaching these classes than my teachers had.” 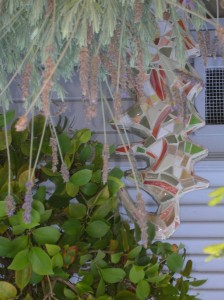 Walking up to Debbie Koppman’s house, you will see artwork everywhere Here is one of her many sculptures.
Debora Gordon/Oakland Voices 2012

Twenty-five years later, she’s found her dream job. “I work with great people.” Although it would be even more perfect if she had her own art room, she’s happy at Sequioa. Debbie finds great rewards in teaching young kids to make art, especially when she gets to “see that kid’s smile – especially kids who have had a hard time – and that they have worked hard, (and are) just proud of themselves.  It’s like you’ve given them to themselves.”

She works really hard to gives the kids access to thinking and working in a way that no other part of the curriculum does. “It shows them how to notice things really carefully, how to spend time on things over a period of days, how to make judgments for themselves, how to talk about other people’s work.”

What’s true for Debbie, she says, is something she often tells her students: “just because you did something doesn’t mean it’s done. You can improve something. It’s not a criticism to say you can work on it more.”

Now 54 years old, she has no plans to leave anytime soon. “I can’t retire. I don’t picture myself stopping working.  I’ll always do art, and I would love to always do art that involves community.”

To see more of Debbie’s work, check out her amazing portfolio at www.debrakoppman.com.

Send suggestions for Oakland teachers and/or artists to profile for Oakland Voices to debora.gordon@gmail.com