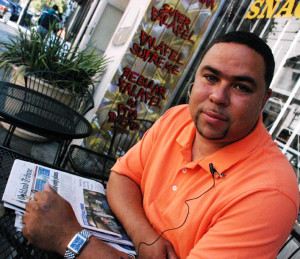 Robert makes about $60,000 a year from the marijuana crop he raises and sells in Oakland. He worries that Prop 19, if it succeeds on the November 2 ballot, will favor a handful of large growers and kill small businesses like his. By Sultanah Corbett

OAKLAND, CA – Pot, purple, cheeba, iz – Oakland’s recreational users have lots of names for marijuana. If Proposition 19 – or, as some advocates call it, The Regulate – passes in California’s November election, there will be one more name to add to that list: legal.

In three weeks, Californians will vote on the Regulate, Control and Tax Cannabis Act of 2010, or Prop 19. If passed, the statewide initiative would legalize marijuana for recreational use, and bring the drug under state regulation.

Several of Oakland’s small cannabis growers are suspicious of Prop 19, which they see as the state government’s wish to control yet another natural resource.

Robert is a licensed grower in the city. He believes that Prop 19 will ultimately eliminate a profitable and reliable source of income for business people like himself.

He worries that it will bring an economic hardship to the communities of small cannabis growers in Oakland. “Once the government begins to control cannabis, then it won’t be about the people anymore,” he complained.

For a decade, Robert has been growing marijuana – a trade he began teaching himself as a hobby. Raising pot, he insisted, is “a skill that is not as easy as some might think it is.”

“The set-up cost of growing marijuana,” Robert said, is the most expensive part of the business. “It takes five to ten thousand dollars to arrange a grow area. The operational cost of growing it is minimal once you’ve begun.”

Robert said it’s a worthwhile investment, because a healthy crop can yield great profits – sometimes double or triple the investment costs. Looking a those figures, Robert was motivated to expand his grow areas and market his cash crop.

Robert said he makes about $60,000 a year from his marijuana crop. That’s a big boost to what he earns from his scooter repair shop in downtown Oakland.

Robert relies on the money from growing to pay his bills. He also uses it to look after his family. As if punctuating his commitment, Robert eagerly showed off a black and white image of his daughter tattooed on his left forearm.

The Compassionate Use Act of 1996 permits Robert the freedom to grow marijuana. Also known as Prop 215, that act allows users to grow and possess marijuana for medicinal purposes.

If Prop 19 passes, the City of Oakland plans to allow only four major cannabis growers to distribute. Small growers are concerned that the plan will only create a monopoly, finally affecting the livelihood of small crop businesses across the city.

James Rigdon insisted that the City Council’s decision to support only four large grow houses has “nothing to do with Prop 19.” Even if those large growers do offer competition, Rigdon said he’s confident the smaller companies will survive. “Just like you have Budweiser, and you have [Anheuser-Busch],” Rigdon explained. “You have all the major beer producers, but you also have micro-brewers across the country who produce their own beer, and they thrive.”

Enforcement of Prop 19, if it passes, will be left up to local governments throughout the state. “[It] sets up the ability for each city and county to allow or not allow as they see fit people to grow for commercial use,” Rigdon said.

Robert said he’s also concerned about criminalization if Prop 19 succeeds. “There are going to be more people getting in more trouble, because the laws are going to be even more stringent on them, especially if there is only to be four major growers.”

Robert said he’s not the only little guy in his business who will feel the pinch if Prop 19 passes. “Street dealers,” he explained, will also get pushed “out of this profitable market. It’s going to be the major players – the major grower and the major distributors – that will legally benefit from the legalization of marijuana.”