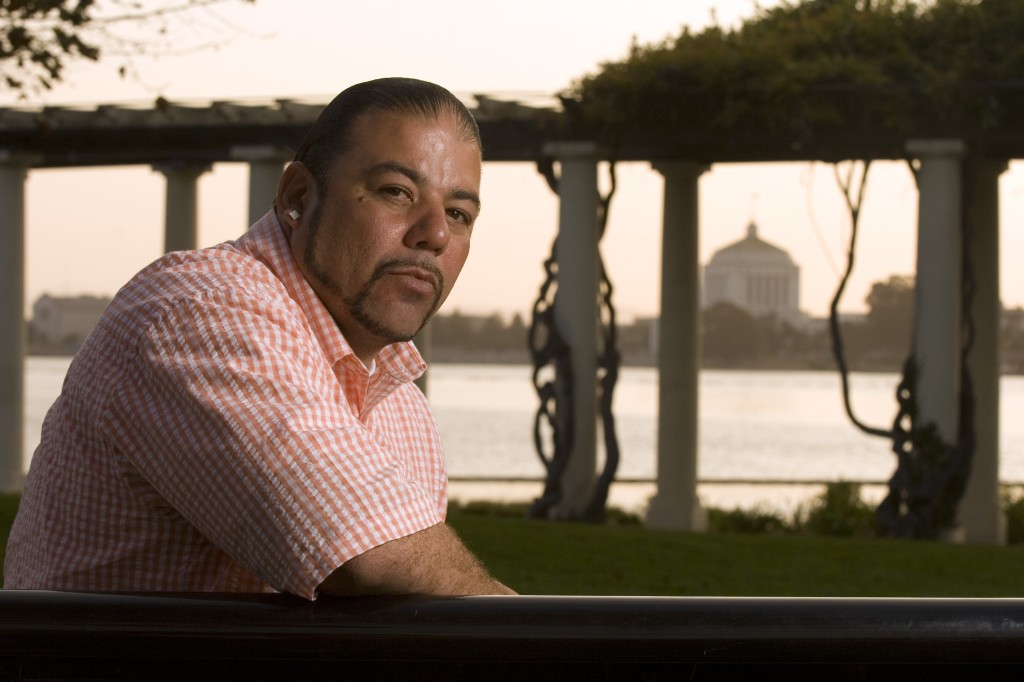 Jack Bryson of Oakland, Calif. poses for a photograph near Lake Merritt, Monday, Oct. 4, 2010 in Oakland. Bryson's sons, Jackie and Nigel, were with Oscar Grant on BART the night that Grant was shot and killed by police officer Johannes Mehserle, and the experience has been transformational for the elder Bryson. He has become an activist against police brutality. (D. Ross Cameron/BANG Staff)

(Also printed in The Oakland Tribune)

OAKLAND, CA — On New Years Eve 2008, Jack Bryson warned his two sons and their friends to stay out of San Francisco.

“I was worried about the police,” Bryson said. “Call it a father’s intuition.”

When calls to his sons went unanswered in the early hours of 2009, Bryson knew something was wrong. At that moment, his sons, Nigel, 20, and Jackie, 23, were on the Fruitvale BART platform where they saw BART police Officer Johannes Mehserle shoot and kill their childhood friend Oscar Grant.

“I was in complete shock when I found out,” Bryson said. “My sons’ mother called me screaming that the police shot Oscar, the boys were in jail and I needed to do something. … For a long time, I didn’t believe it had happened and especially that it was filmed.”

Cell phone videos of the graphic shooting was shown on the Internet and television.

Mehserle, who was charged with murder, was convicted July 8 of involuntary manslaughter. He faces up to 14 years in prison when he is sentenced Nov. 5.

Despite the conviction, public outrage has surged because many Grant supporters felt the involuntary manslaughter conviction was too lenient. They wanted to see the 26-year-old Mehserle convicted of murder. (Second-degree murder was the highest conviction the former BART officer could have received.)

In the 18 months since the killing, Bryson has played a crucial role in the Justice for Oscar Grant Movement. He has become the voice of Grant’s family at community rallies, benefit concerts, film screenings and other functions to demand justice for the 22-year-old Hayward man.

On a sunny, warm day at Lake Merritt, far removed from the chaos of that night, Bryson reflected on what happened. First, though, he took a moment to notice children running around the park, enjoying life. The sound of an ice cream cart vendor grabbed their attention, and about a dozen kids ran to the cart. They giggled and pointed excitedly at what they wanted, and what they’d order if they had the money.

The 48-year-old Bryson was their hero this day. He walked to the cart, just as excited as the children, and bought a rainbow of ice cream flavors to pass down a line of grateful children. Parents stepped up to thank him and made sure the children did the same.

Bryson smiled, sat down on a park bench and stared at his ice cream. Children hold new meaning for him now.

He took a long pause and spoke, his soft-spoken voice filled with sorrow. He spoke about his frustration with what he considers an increase in the number of African-Americans killed by police. But it wasn’t until Grant was killed that it really hit home and moved him to get involved.

Bryson sees the Mehserle trial in the context of the larger historical racial injustice.

“In the past, you could hang a black man from a tree and nothing would happen,” he said. “Now, the same thing happened to Oscar Grant. It’s the same mentality. It hasn’t changed.”

Bryson said he feels that what happened to Grant and the trauma experienced by his sons will go unheard.

Bryson said he believes good police need to stand up so these kinds of crimes don’t reflect badly on all law enforcement.

The day after Grant was killed, Bryson attended a memorial service at the Hayward park where his sons and Grant had played Little League.

“Seeing all those people crying for Oscar, I knew something had to be done; somebody needed to represent Oscar correctly,” Bryson said. “My sons kept asking me what are you going to do? As a parent I didn’t know what to tell my sons.”

Scared and worried, Bryson took it upon himself to contact civil rights attorney John Burris to encourage him to take the Grant family’s case.

Not only did Burris take on the civil case, he encouraged Bryson to reach out and tell the community who Grant was.

“I have great admiration for him,” Burris said. “He has tried to do right by his kids and this whole event. He speaks from the heart.”

Burris said Bryson has become somewhat of a folk hero for his activism and that he has invited him to attend key meetings with Police Chief Anthony Batts in the aftermath of the Mehserle verdict.

“He’s trying to help his sons, and basically all young men,” Burris said. “There has been a lot of positiveness about him over the past 1½ years I have known him. He has been there everyday, more so than most.”

Bryson said he’s “meeting a lot of people getting the message out, but this is a day-by-day thing; there is no plan in place.

“You don’t just get up and say I’m an activist, you’re forced into it. I’m not a leader. I just follow the sentiments of the people — that’s where the power is.”

Before the shooting, Bryson said he had normal life. He went to his job at the Oakland Housing Authority, walked the lake, spent time with his sons and hit the gym. A self-described loner, Bryson says his life is now filled with pain.

“I hurt everyday for what happened to all the boys on the platform that night. The only rewards I have come from the people who walk up and hug me and show concern for the battle I’m fighting,” he said.

Bryson’s biggest fear as a father was that one day his sons would be victims of police abuse, that one day he might have to bury one of his sons. As a worried father, he always made it a point to meet his sons’ friends and show up at parties and games.

“Oscar knew  I was a worried father. He told me one night I didn’t have to worry, all the boys would look out for each other.”

After Grant became a father, Bryson said they bonded on another level.

“I saw Oscar one night; we bumped into each other coming out of the store. His daughter had just been born. He said having his daughter made him realize why I was such a worrier,” Bryson recalled. “(Grant) smiled and told me he respected it. He loved being a father.”

Bryson said his sons have been traumatized. Pending litigation against BART prevents them from speaking publicly about the incident.

But during Mehserle’s murder trial Jackie provided emotional testimony that had the whole courtroom in tears. Jackie testified during the trial that told Mehserle, ‘you shot me!’

“My son is looking and can’t believe it. My son said, ‘don’t close your eyes Oscar.’ He started yelling for the police to call an ambulance.”

Bryson said Jackie had a panic attack on the platform watching Grant die.

“I feel angry as a parent that my son had to go through this … it was preventable.”