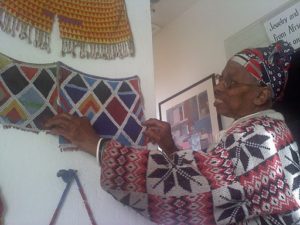 Aissatoui A. Vernita at her Ebony Museum of Art in West Oakland. Now in her early 80s, Vernita has been collecting African and black American art “since the age of 9.” By Cameron Wilson

OAKLAND, CA – The bus ride from downtown Oakland to Oak Center is never monotonous.  There is always something different to see, from the changing seasons to people going about their daily routines.  Amongst the usual things found in a residential neighborhood; single and multi-family homes, trees and parks, something that stands out is the Ebony Museum of Art, Inc. a private house museum located on the corner of 14th and Linden Streets.

Aissatoui A. Vernita is the founder of the Ebony Museum of Art.  Vernita’s personal private collection of African and African American art expands over three floors in her home.   Vernita’s collection is a lifelong expression of her fervor for cultural expression and history. “I’ve been collecting since the age of 9,” said Vernita, who is now in her early 80s.

An Arkansas native, Vernita has lived in Europe and the Middle East as the wife of a career soldier.  Living abroad expanded Vernita’s cultural perspectives.  “When you travel you get more in your brains.”

Back in the states, Vernita and her family endured the humiliation of segregation and blatant inequalities. Those experiences throughout the 1950s and 60s instilled a positive spirit within her. Vernita channeled much of that energy into founding EMA and creating her own art.

The museum thrived over the last two decades, welcoming school field trips and visitors. At one point, it split into two locations – one in West Oakland, and the other in Jack London Square.

EMA was famous in Oakland for its public events, which brought together African American artists to exhibit their work.  These events acknowledged artists’ integral contributions to the cultural expression.

In 1989, the museum hosted an exhibition titled “In Celebration of the African-American Artist.”  The exhibition featured 100 contemporary artists.  Vernita’s work was also on display. She also helped write a brochure that explained her vision for the event. “The forum will not attempt to speak with one monolithic voice,” it reads, “but with many voices, reflecting the myriad of colors, mediums, styles, and thoughts that are ‘Black Art,’ a cultural spectrum.”

As an artist, Vernita has contributed thought-provoking sculptures and jewelry, using soul food – including collard greens, beans, and chicken bones – as expressive media. One prevalent piece is on display in the  EMA’s front yard. It is a wooden boat covered in bones with sails of newspaper.

Vernita is committed to displaying a diversity of African and African American art.  She views the collection as a whole – each piece an integral part of the story of black culture. “All of them are my favorite.” She said.

Vernita views her home as “a place where black people are recognized,” and the pieces in the tremendous collection as “things that our people can be proud of.”