5 Years After Katrina, Recalling Stories of Fear & Relief Over Loved Ones in New Orleans 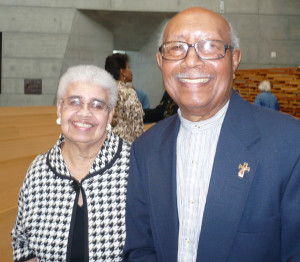 Mary Lou Stelly and her husband Eugene. In the weeks following Hurricane Katrina, Mary Lou, an Oakland resident, called all over the country searching for her brother Antoine Schexnider after the storm forced his New Orleans nursing home to evacuate its residents. By Jo Ann Bell

Hurricane Katrina left Louisiana and Mississippi with memories of utter destruction. It’s been a month since those and other Gulf states marked the fifth year anniversary of the storm, and the floods that followed.

The region was still reeling one month after Katrina. For two families in the Bay Area, the weeks following the storm felt like an eternity.

OAKLAND, CA – Barbara Lafitte-Oluwole felt helpless. She sat by the phone, wringing her hands, and watching TV news reports of the havoc Hurricane Katrina and the broken levees were wreaking on New Orleans. “I was suffering devastation, fear, and worry.”

Lafitte-Oluwole, a Louisiana native who now lives in West Oakland, said her anxiety came from “not knowing the whereabouts or condition of my family and friends residing in New Orleans and neighboring cities.”

She relied on emails between her family in Louisiana and elsewhere for news on the whereabouts of her sister, aunt, cousins, and her mother, who was living in a nursing home. Notes like “I haven’t talked to Gwen, but I heard she and family are safe in Baton Rouge,” and “Aunt Mardis is safe” were among the countless email updates that helped keep Lafitte-Oluwole hopeful.

For Mary Lou Stelly, a native of New Orleans and resident of Oakland, the news of Katrina brought horror. Although she moved with her husband to the Bay Area in 1959, Stelly said, “New Orleans is as much my home as is Oakland.”

She had a large extended family there. Two of her brothers were still living in the city – one with a family of his own, and the other in a nursing home. Her two other brothers were deceased, but their families remained in New Orleans.

“The inability to make direct contact with my family was a nightmare,” Stelly recalled. Relying on relatives outside of the area for updated information, she found out her sisters-in-law had been evacuated to Texas and Baton Rouge. Her youngest brother was able to evacuate in time with his wife and children.

In the midst of the horror, came a story filled with faith, humanity, and love.

The night Katrina landed, Stelly’s oldest brother Antoine Schexnider’s nursing home started busing out residents who could walk. That left Antoine and his roommate stuck on air mattresses in their second floor suite.

A nun moved the roommate to a corridor with his air mattress so he could use it as a flotation device. Antoine was pushed to a corridor and left on another mattress and a wet sheet near the second floor stairs.

From that Sunday until the following Saturday, Antoine lay there. He survived for a week on a cup of grapes. There was no other food, and no water.

Another bus came, but would take only those who could walk. Rescuers tagged Antoine for evacuation and he was eventually lifted by helicopter to a freeway incline. He was left there with a group of bodies that carried assorted tags indicating who was alive, and who was not.

The plan was to transfer everyone to the New Orleans Airport. He found out he was going to be taken to Atlanta. “I don’t know anyone in Atlanta,” Antoine said to himself, before sending up a silent prayer.

Mary Lou Stelly spent her waking hours on missing persons phone lines trying to locate her New Orleans relatives. A week later she received a phone call from someone she did not know asking if she was Mary Lou Stelly and did she have a brother named Antoine. She was told that that her brother was en route to Memphis.

Stelly turned immediately to her family network. She called nieces who lived in North Carolina, they in turn dialed a friend in Tennessee, who reached out to someone they knew in Memphis. Her family fanned out through the phone lines, forming a search party to track down “Uncle Antoine.”

After a Presbyterian minister in Memphis met the New Orleans evacuees, he asked his community for help. Church members responded by adopting Antoine, taking care of him in the small town of Franklin.

Antoine lived out the remaining three years of his life in a nursing home there.

Mary Lou said “during those three years, my brother didn’t want for anything. Even his legal needs were met through someone we never knew.”

A few days after what would have been Antoine’s 76th birthday, Mary Lou spoke of the appreciation she felt towards those strangers who loved her brother so much to care for him with such kindness.