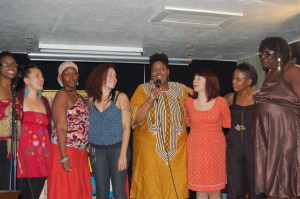 “I was inspired to create The Shepeople’s after meeting female artists who needed a space to showcase their work,” said Troutt, who coordinates and hosts events the third Friday of each month.

The project is based at the New Community Fellowship Church in Oakland‘s Dimond District. The group regularly seeks out new female artists to present and share their talents and to add fresh faces to the ensemble. “For some artists,” Troutt explained, “it’s their first time performing for an audience.”

More than a monthly event, The Shepeople’s is a place for artists to showcase their talents, create followings, and expand their networks. This community encourages and celebrates diversity among women through the arts. The Shepeople’s events are open to everyone.

As a singer and songwriter with an EP coming out this month, Troutt said art has always been a major part of her life. Her mother, Valerie Brown-Troutt, is a visual artist, and her father Robert Troutt, sings, and plays piano and guitar. Both of her parents are also pastors who believe strongly in helping their community.

“My father is a Renaissance man,” Troutt said. “(He) can often be found helping young men fill out job applications, feeding the homeless, or fighting for the rights of Oaklanders at city council meetings.” Valerie Troutt has always been inspired by her parents’ mix of art and service. “My father is my number one fan, and has encouraged me to be a successful artist.”

Troutt wants to make The Shepeople’s more visible in the Bay Area. Her greatest hopes are to make the collective a destination for female artists all over the world, and to create an all-female residency and festival in Oakland.

Visual artist Corinna Nicole Brewer joined The Shepeople’s last November after attending the group’s first event. She remembered the place being “hella packed. People were sitting on the floor. It was amazing.”

She was so impressed, she emailed Troutt right after the show and asked to be featured. Brewer became the first visual artist to exhibit her work at a Shepeople’s event. It was also her first California show.

For Brewer, making art started as a childhood hobby. She’s been painting for about 5 years, creating pieces that address identity and human relationships. “I tend to use myself as inspiration for my subject matters, whether it is about the dynamics between myself and others, my desire for women, my bi-racial heritage or my interests in gender identity.”

The Shepeople’s has introduced Brewer to a lot of talented people and exposed her and her work to art lovers. Since showing her art, she has worked with the group’s SheCommittee, where she helps with event planning, media and communications. “It feels good to be a part of a supportive and creative collective.”

Go to Corinna Nicole Brewer’s site to see some of her art.