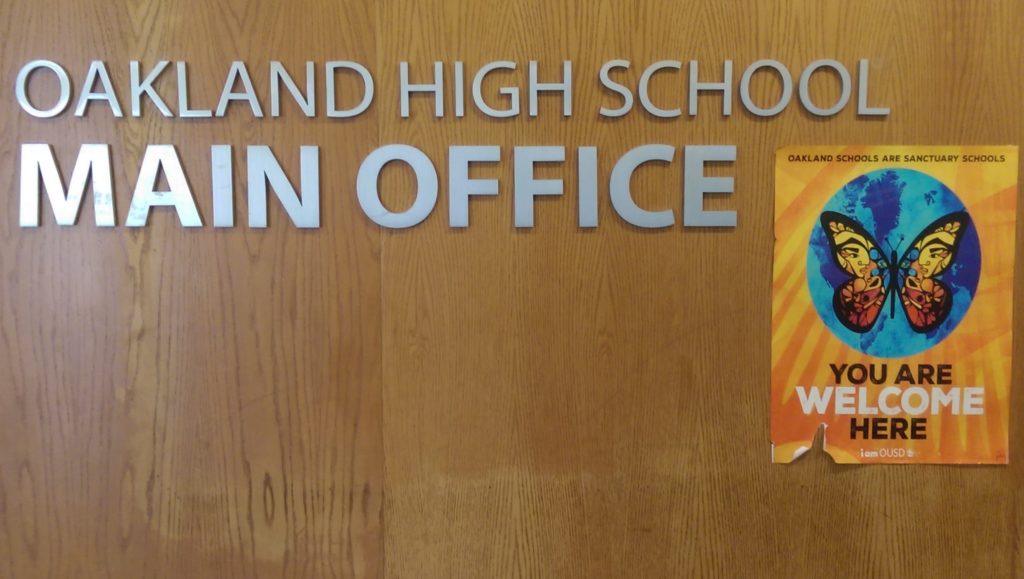 One’s journey through grade school is supposed to be a time that builds children into young adults with the opportunity of a brighter future. But in today’s American society, it appears to be anything but that. There are various forms of disruption amongst students’ lives; the one that immediately hits home to East Oakland is the constant threat and discussions of ICE.

Through personal experience, I have unfortunately observed some of the negative impacts that deportation can have on a person trying to make it through life. When I was in high school, I shared numerous conversations with a close friend on how disruptive and disturbing deportations had been for him and his family. His father was an undocumented immigrant who had been deported three times, resulting in damaged relationships within his family due to stress over financial struggles and daily concern over his father’s well being.

My friend’s direction was lost and his grades suffered. In his father’s absence, he was forced to take over as the man of the house and be a positive influence on his younger siblings. The pressure was on him at all times and fortunately he delivered. His perseverance through those difficult times is something that I never want to forget. The memories of his struggles motivated me to spread the word about those who are in these circumstances. I decided to focus on individuals who are consistently exposed to people who are dealing with circumstances similar to my friend’s. I couldn’t think of a better  perspective than that of a teacher. I took a trip to Oakland High School where I interviewed my ninth grade English teacher, Mike Jones.

“When did you first start to take notice of ICE?”

“I first started to take notice in 2004 when I became a high school teacher,” Jones said. “The fear of ICE didn’t start with Trump, however it significantly amplified due to his election. This is something that has always been here.”

“Has Oakland High taken action regarding a potential ICE threat?”

“Shortly after Trump’s election was when I recall learning about anti-immigrant policies. As I remember, after Trump announced the travel ban, the school district released information to the school about ways to approach students about anxieties relating to these policies. The principal informed us of the district’s stance: that all of OUSD would not assist any law enforcement officer attempting to enforce any anti-immigrant policies.”

“Have there been any programs developed in relation to the issue?”

“We have a newcomer students program that serves students that have recently immigrated to the U.S. There are English programs and social services that target their needs as new immigrants. Many of these students live under the threat of removal, constantly. The laws affect students’ access to college education, so counselors have had to learn the new laws and navigate laws related to college and financial aid opportunities.”

“Have any of your students reached out to you for support?”

“The few off- hand mentions have come through writing. Students do not want people to know about their documentation status. I received an email from a lawyer representing the father of one of my students, asking for a letter of support on how the father’s deportation would affect the education of one of my students. The intensity is way up; it’s (the immigration status of family members) a secret out of fear. The hostile policies are something they have no control over.”

“How has that impacted the quality of your classroom? Any deeper involvement?” 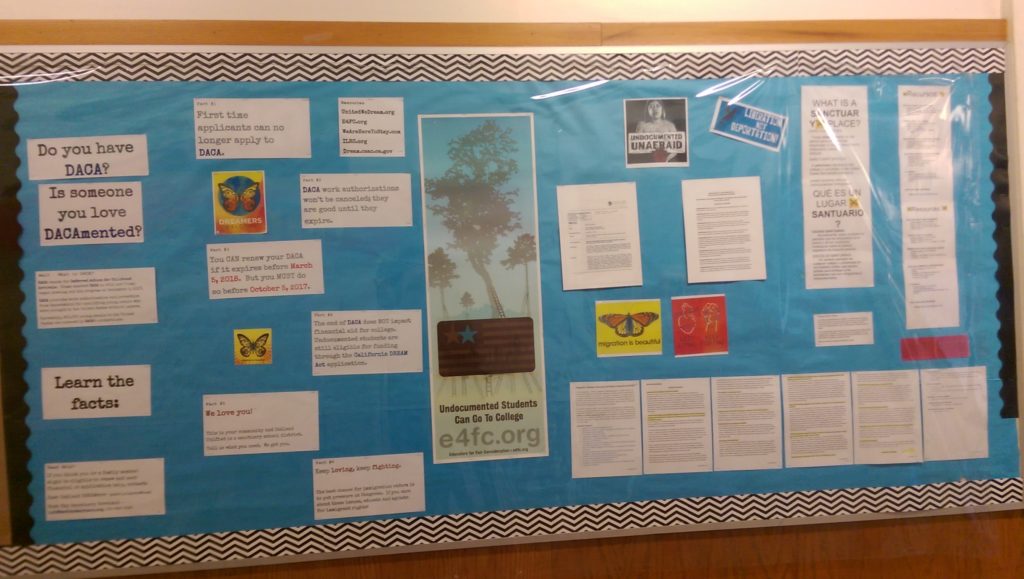 A display about DACA at Oakland High

“I have a lot of students that are immigrants who are taking English 1 as older students because they were still learning English as freshmen. So, a lesson this past week focused on how teens and elders can improve their relationships with each other. That involved a trip back in time, researching their elders’ home country in the years when their elders were young. From that investigation, a large number of students shared stories of war, and in that, they found commonality that strengthened the community of our class. The connection to ICE is that these students now are facing a threat from our own government that is similar to threats in their elders’ homeland.”

“How has this ordeal changed you?”

‘This strengthened my resolve to protect my students; knowing that these are important people in my life and that their families are threatened has made their danger more real to me. Hope is that I never see an ICE officer in my classroom, but if one appears at Oakland High, I, along with all of my colleagues, will not give any information about our students or colleagues.”

My time spent in Oakland High was brief but enlightening. Staff members who I encountered were supportive of the article and the message. The obstacles of this predicament have strengthened the relationships amongst students and staff; shining  glimmers of hope and compassion are bringing people together in a time when society seems to be falling apart, breaking away from morals and compassion.