By Howard Dyckoff and Tom Webb

A coalition of non-profits, school district employees and state agencies has launched an ambitious project: the greening of Brookfield Elementary School in East Oakland to reduce pollutants and improve students’ health. 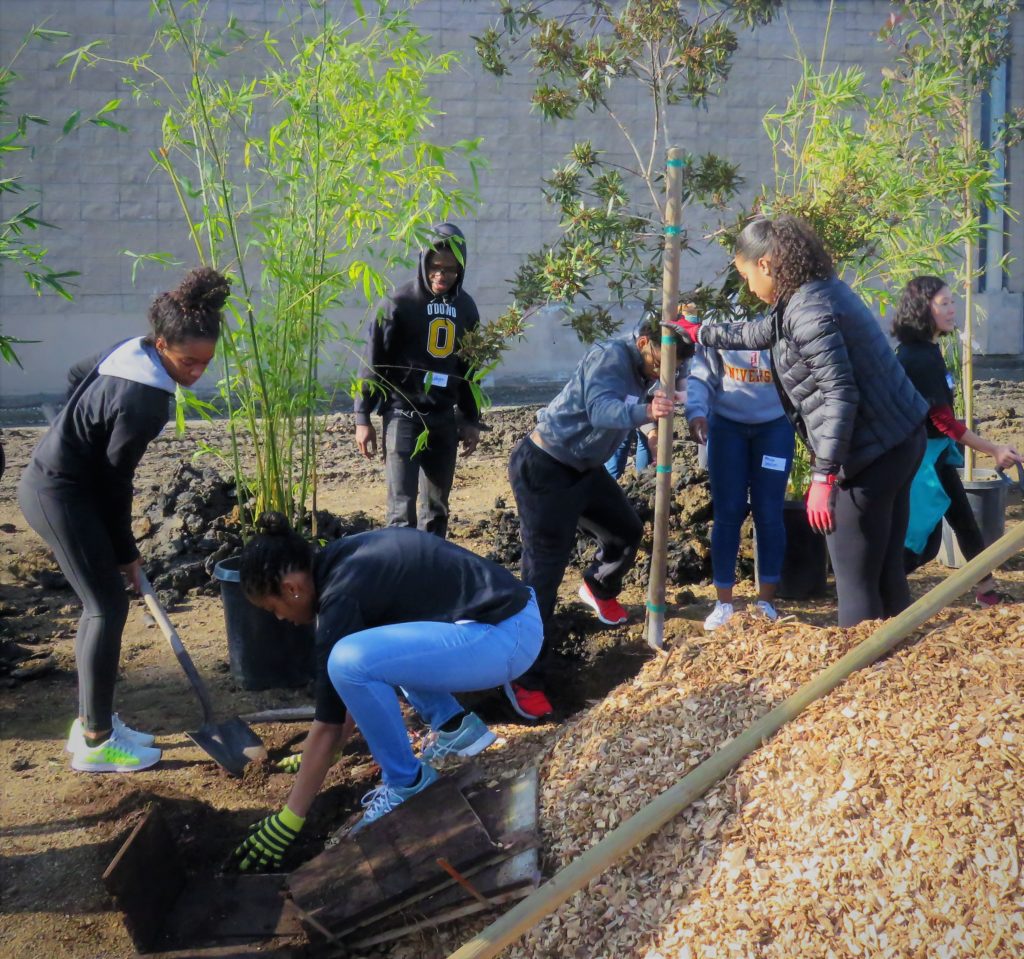 This past Martin Luther King Day, more than 300 volunteers, teachers and families spent the day planting trees, the first step in a complex environmental restoration that will eventually include a vegetation barrier of 1,000 trees planted next to the freeway retaining wall, an orchard of orange, pomegranate and kiwi trees and a small farm.

“It was amazing to be apart of the MLK Day of Service at Brookfield Elementary School,” said Kevin Jefferson, project manager from Urban Releaf, which promotes urban forestry. “We were able to change the school forever with shade and fruit trees, plants and herbs while educating parents, students and teachers of the benefits of agroforestry.”

The project actually started about 15 years ago, according to Tiffany Gipson, educational assistance director for Higher Ground, a neighborhood development corporation. She said a Brookfield teacher “noticed that many of the students and teachers seemed to have very high levels of asthma and respiratory problems.”

The school’s location is a major factor. Constructed before the Nimitz Freeway was completed in the 1950’s, the school has a 25-foot retaining wall separating the freeway from its western boundary. The considerable flow of commute and industrial traffic, which begins streaming up and down the freeway early in the morning, churns up a volatile mix of carbon-based exhaust which impacts the air quality at the school and surrounding neighborhood.

“Brookfield School is smack in the middle of the single worst census track of cumulative pollution burdens in the Bay Area,” said David Ralston of the Bay Area Air Quality Management District.

To combat the air pollution and noise, the vegetation barrier, consisting of 1,000 madrone, bamboo and other trees, will be planted next to the freeway retaining wall.It will be the school’s small contribution to the international efforts to combat the effects of greenhouse gases. 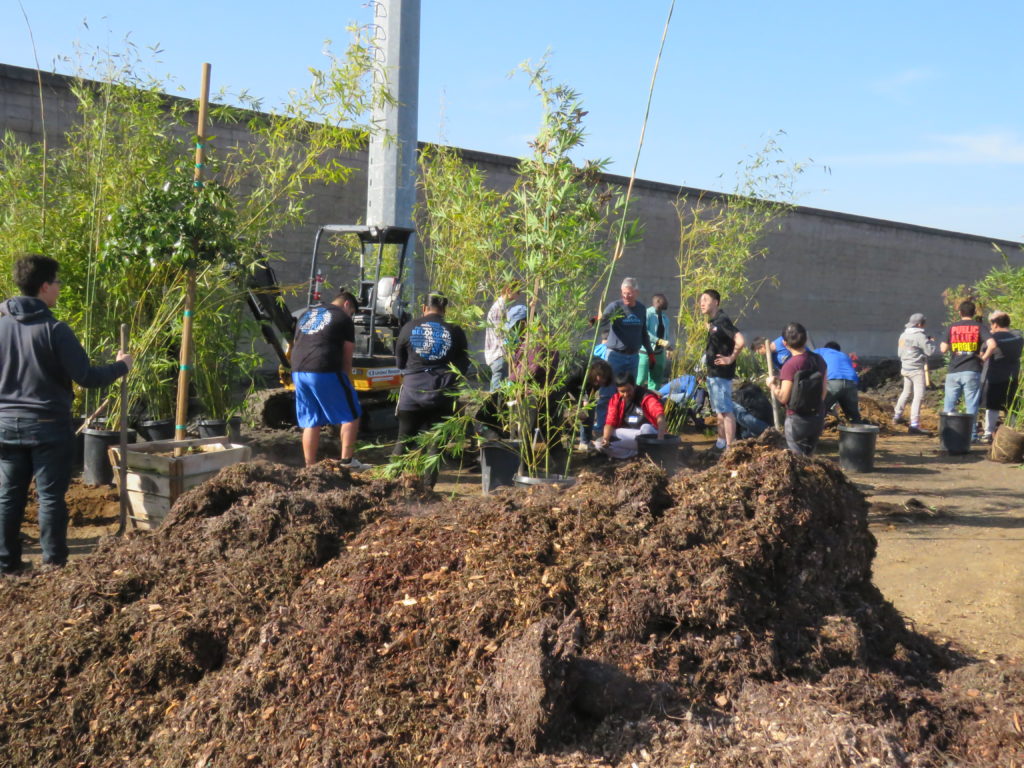 Ken Davidson, a representative of the U.S. Environmental Protection Agency (EPA), said research on vegetation barriers showed the greenery disrupted the flow of pollutants, and reduced airborne particulate matter. He said the EPA will be monitoring the trees throughout the project.

Notably, a recent EPA report on vegetation barriers found: “School-aged children living in close proximity to high traffic roadways were shown to have poorer asthma control than their peers. A follow-up study showed that poverty further increased the impact of traffic pollution on asthma. Exposure to high concentrations of traffic-related pollution was also associated with adverse outcomes for pregnant women such as reduced fetal growth and preterm birth.”
To enrich the ecological diversity of the campus, organizers are planning an orchard and building a small farm. The orchard, which will be located mid-campus, will consist of orange, pomegranate, apple, lemon, lime and kiwi trees. Native species of plants will also be planted with the hope that wildlife native to the area may also be drawn to the grounds.

The ambitious project began in earnest in 2014 when Oakland Unified selected Brookfield as one of the five Intensive School Support sites. This allowed Higher Grounds, school staff and parents to create a new vision for the school. This collaborative effort examined all facets of the school including leadership, structure of the instructional program and the services needed to contribute to a thriving school environment where all students could flourish.

James Scheid, a forester with CalFire’s Urban Forestry division, said Urban ReLeaf has a Green Trees for the Golden State grant of more than $740,000 to plant 1,100 trees and hundreds of plants in the flatlands of Oakland, primarily East Oakland.

“It takes a dedicated team, like Urban ReLeaf, with their outreach and local partnerships to successfully pull off a project like this,” Scheid said.

Online photo albums from the event are here.