In Oakland, Sometimes Who’s President Doesn’t Matter as much as Who’s Policing

“Were you able to get off work?” my Oakland Voices partner, Cinque called to ask. I was en route to the East Bay Times office but I had forgotten to text him before leaving. I apologized and explained I’d be there in a few minutes. After disconnecting the call, I foolishly thought to myself, “It will be a relief when Election Day is over and I won’t be so distracted.”

I had been away from the news for a few hours, so I was not mentally prepared for the electoral college results projected on the television screens when I arrived just after 7 p.m. The network anchors had not called Ohio yet. But a mixture of shock and despair hung around the room, like a shroud of horror film spider webs.

“How could Nate Silver get it so wrong?” Oakland Voices coordinator, Brenda Payton, asked as she scanned the Five Thirty Eight website. It was a fair question. Silver, an American statistician, had reached near-celebrity status when he successfully called 49 out of 50 states during the 2008 Presidential Election. This election, he had projected a 71.4% chance of Hillary Clinton winning.

We joked about needing a stiff drink, like the stereotype of Old School journalists who kept a flask or bottle in their desk drawer specifically for moments like this. It reminded me of a tweet I had seen earlier that afternoon, by The Oatmeal comic creator Matthew Inman, that read simply, “I think the real winner tonight is alcoholism.”

Before taking a bite of his gluten-free pizza, Cinque asked “Which questions do you think we should ask at the party?”

I was grateful to be snapped back into focus.  Our shared assignment was to cover Oakland’s Measure LL and interview supporters at 310 Gallery’s election night party a few blocks away.

We decided to ask our interview questions as a team when we arrived so that one of us could take notes or record audio, while we alternated asking the questions. A photographer, Cinque also had his camera ready to document the night.

The Yes on LL website describes how the measure “will establish a civilian police commission with the power to subpoena officers and impose discipline, hire and fire the police chief, and give input on policies and budget priorities.” For decades, Oakland’s police department has been plagued with unfair policing, corruption, racial profiling, federal oversight, and most recently, a sex-trafficking scandal. There was little doubt in anyone’s mind that Measure LL would pass. 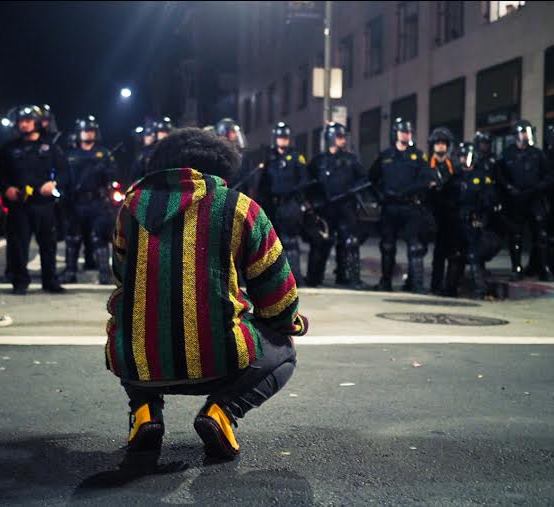 However, since Measure LL was proposed by two city council members after years of grassroots pressure from local citizens, it was a little different than other measures on the ballot. While Measure LL had local advocates and opponents, there was no traditional campaign manager or office. As Cinque and I headed down to the gallery, we discussed who we might find at the party to speak to us about the measure, based on which community members were interviewed in previous local news coverage.

When we arrived, the gallery’s cocktail party atmosphere was light and upbeat. We discovered the party was a joint celebration with incumbent school board candidate Roseann Torres, who was projected to win soon after the polls closed. Our official press credentials helped us navigate the room and introduce ourselves to partygoers.

First, we found one of the main architects of Measure LL, Pamela Drake. She spoke to us at length about the politicking involved to push through what she dubbed as “gateway,” or incremental reforms.

Then, we spoke with gallery owner, Brett Badelle, who offered his thoughts on the value of community policing and accountability before checking his phone to confirm Measure LL was passing with a wide margin of over 80 percent.

Finally, longtime Oaklander and police reform advocate, Rashida Grinage, gave a passionate victory speech that stressed the next step of recruiting commissioners who would be representative of the Oakland community.

As I drove Cinque home, we talked about which interview quotes we should use and which pieces of the story each of us would write. We parted ways after my phone began buzzing with friends and family reaching out to discuss Trump’s presidential win.

The following day, despite any election-related shellshock, Cinque and I had to synthesize our notes and recordings for the assignment. We decided to use Google Drive’s online collaboration tools to share our recordings and write together in a shared document. We exchanged a few emails and text messages to check-in before I officially submitted our story.

Initially, I was a little leery about this assignment. I’ve worked on a few grassroots campaigns over my 20 years in Oakland and had some negative experiences with Oakland police. More than once at the party, I found myself apologizing to Cinque for being less than impartial and going “off script” during the interview process.

In retrospect, I appreciate that the Oakland Voices community media project gave me this opportunity to step back, observe, and document a pivotal moment in our community. The hard-won nature of politics and local government reforms can be soul-crushing, but reporting on those issues can be inspiring.

Most of all, I’m grateful for sharing the experience with my fellow correspondent and East Oaklander, Cinque. At 22,  he is neither burnt out nor jaded about local politics. This was his first experience at a political election night party. Plus, as a young Black male in Oakland, his demographic will be directly impacted by the police reforms promised with Measure LL.

Sharing the election night experience with him, reminded me how Oakland’s older community organizers need to reach out and raise up the next generation of leaders. Because sometimes, the outcome of local politics can impact our daily lives as Oaklanders more than any presidential election.