The stated aim from the Dev Summit web site is :  “…a collaborative space for everyone from grassroots activists to software developers to share knowledge, discover new allies, and collectively envision the future of free and open technology to support positive social change.”  The organizers, Aspiration Tech,  have hosted or co-organized almost 300 interactive events in over 40 countries over the last decade. See more at: https://aspirationtech.org/events#sthash.DL01jPBI.dpuf

Aspiration’s Executive Director, Allen Gunn, known as “Gunner” to all participants, was the MC .  His deep voice and and friendly quips kept the assembly on time and on the agenda.

This is the 12th non-profit technology summit.  Gunn noted that the event also builds relationships and community between groups and individuals  “At the end of the day, technology is an excuse for getting together and building trust, so we hope that what people find here is friends and allies because that’s how movements get built, that’s when change gets made, not when we are coding something… but when we are breaking bread together .”
“We really hope that people can teach it forward, that is coming here, finding out about stuff that might be relevant…,” Gunn added.  :We’re just hoping that people coming out of this event are inspired to teach other what they learned.”
Gunn also expressed deep concern at the rapid pace that non-profits have been moving to and trusting cheap Cloud-based storage options. Specifically moving data that was previously on local servers to data centers managed by large corporations whom may be the targets of future investigations and campaigns.
“I think that’s a high risk point of failure…. Sadly, what we are seeing is organisations that had technical staff letting them go, because of the Cloud.”  He added that he felt technical proficiency was a needed survival skill for all non-profits.
For social change organisations, putting data in corporate storage services is risky.   Gunn gives this example regarding Facebook:  “There was an anti-Gay marriage campaign in Minnesota, and the CEO of Target was funding it…  and on Facebook a group organized to boycott Target…  Facebook shut down that campaign because Target was an advertiser on Facebook. I think that  non-profits are selling themselves short and selling themselves out if they depend on corporations for any infrastructure.” 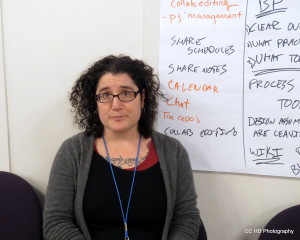 Attending this year was Lisa Jervis, a consultant at Information Ecology who provides strategic technology planning to non-profits.  Jervis said that most non-profits are resource constrained and “… choosing tools that are misaligned with their mission and work practices can be extremely damaging.” Jervis added that she was interested in seeing how many participants were now focusing on information security as a major issue.

“For this year, I was gratified to see so many people interested in discussing security in the context of human practices rather than technological fixes,” Jaris said.
“All these technologies are only tools and they will not do anything for you.  Rather, you have to do things with them.  Choosing both the right tools and appropriate ways to use them are both  important,” Jervis said.  “It’s really easy in the technology space to be distracted by shiny new apps…. But it doesn’t matter if an app does XYZ if XYZ isn’t what you need.”

Bill Budington of the Electronic Frontier Foundation (EFF)  led a session on “let’s  Encrypt”, a  new application to simplify strong encryption for non-profits and social change organizations.   In a beta stage now, the app is being build at the EFF with support from partners like Aspiration Tech.
“It’s significant being here being here in Oakland since so many people are dedicated to social change.” Budington told Oakland Voices  “Oakland has always been at the center of social change so its appropriate to meet here and talk about technologies that are change the world”
Bill added that the the diversity of the sessions and the diversity of the attendees “speaks volumes to the welcoming nature of the Non-Profit Dev Summit and Oakland is a great location for this.”

Another attendee was Oaklander Neil Planchon, who works with 2.Oakland (an organization that grows and nurtures the Oakland technology and innovation ecosystem – www.twopointoakland.com) and Open Oakland (which fosters civic engagement). He recommends the Nonprofit Software Development Summit (#npdev) to anyone who is involved in the Nonprofit community.  “This community is a fantastic collection of professionals, activists and organizations that get me excited each year.  Newbies and regulars leave with an expanded view of the tools that exist, a refreshed knowledge of what other global and local organizations have new opportunities for collaboration. ”

Planchon added, “I have helped create and joined many new initiatives from my annual attendance at Aspiration’s Nonprofit Software Development Summit. “
Amanda Hickman of Buzzfeed in SF also noted that there were more sessions and more nuanced discussion on privacy and security concerns this year. especially how to implement digital security throughout an organization. Hickman is BuzzFeed’s Senior Fellow at its Open Lab  for Journalism, Technology and the Arts and a member of  @SFPublicPress..
Oakland is the backdrop for the Summit and is part of the proceedings.  Misty Avila, Aspiration’s Program Director,  explained why Oakland  is the recurring venue for the Summit:  “We have a  long term set of partners and local nonprofits that we work with in the East Bay, many of whom attend annually. And Oakland  is deeply rooted in social justice issues. We have been asked by the participants to return to Preservation Park year after year.…”
Gunn added, “We are delighted to do the event in Oakland. The local tech  community is so vibrant, as is the local activism. We just love being here.”
See more images from the Non-Profit Dev Summi here:
https://picasaweb.google.com/109712571417781647344/OVAspirationTech2015
Author Profile