I’ve always referred to my neighborhood as the Laurel district, but was surprised when a friend who has lived a block away for 30 years referred to it as the “Upper Dimond.” This is a neighborhood above the cusp: five blocks above busy MacArthur Blvd. near 35th and the drone of the 580 Freeway. Tree-lined streets make their way into the hills where houses seem to grow larger with the ascent. Quiet bay views replace the din of traffic and commerce just a few blocks below.

I greet my neighbor Pam, a retired school counselor, in her front yard. An arborist is giving her an estimate for cutting the dead tree in front of her house right by the spot where her husband was robbed at gun point several months back. She says she’ll convert the stump into a free, give-one-take-one library.

Walking north, the neighborhood cat, Checkers, looks surprised to see me in a spot other than our usual greeting area in front of my house near the corner of Laurel and Arizona. Birds are chirping this late weekday morning as I walk toward Coolidge. A few drivers pull their cars of driveways. One hurried commuter ignores my greeting. 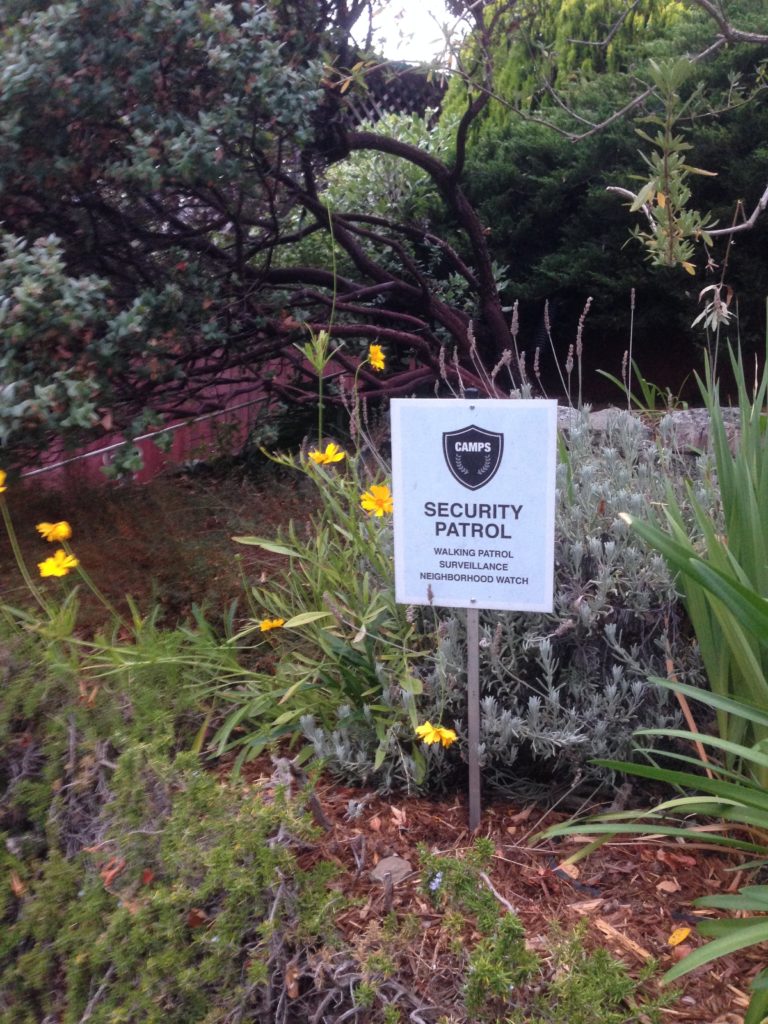 Intermittent private security signs stick out on the lawns; I count eight different companies. The Mormon Temple rises above as several dog walkers of mixed ethnicity (Asian, African American and White) are doing the morning ritual. Single-family bungalows, with signs advertising their private security firm of choice, give way to a mix of homes along with small apartment buildings, condos, and hidden in-law units.

There are fewer lawns; brown is the new green. More and more homes are fronted by rocks, gravel, and an array of drought tolerant plants.

Traffic is light along tree-lined Coolidge where I turn left. I count 41 houses (nine private security signs; only three lawns, all in decline, with many drought tolerant alternatives) along this long stretch that ends at MacArthur.

Bret Hart Apartments is three stories with perhaps 20 units and sits across from Bret Hart Middle School. Two tenants  exchange greetings at the lobby entrance. The Rising Oaks complex (several buildings with solar panels) comprise perhaps a dozen units which are actually on the extensive, browning grounds of Fred Finch Youth Center. (The security guard provides little information.)
I count eight buildings, one marked “Training Center,” at Fred Finch. Next door, the Bret Hart campus sprawls to Hopkins Street. Three large buildings – one with a recently completed bright mural – surround an expansive, paved playground with markings for PE classes, a ball field, and 15 basketball hoops. These youth facilities are eerily quiet and serene during these waning days of vacation. I pass a jogger (middle aged,) in the street as a competent musician practices the violin a couple houses away.

MacArthur Blvd. usually bustles at the Coolidge light where the recently re-named Oakland City Church has seen better days. A little, rundown plaza sits on the corner offering ice cream, liquor, electronics and real estate to go along with a framing shop and a community art center.
A faded, but still attractive Bret Hart School mosaic (with the words “Resilience, Respect, Hard Work”) fronts MacArthur.
Several longstanding enterprises stand out on this route: eco-friendly Hi Hat Cleaners “Since 1951;”  Oakland Rentals (tools, and heavy equipment); and the Food Mill, selling a wide selection of natural food products since the Great Depression. Health services include the offices of a pediatrician, psychologist, dentist and acupuncturist. Small businesses ranging from a solar car wash, barber shop, laundromat, and a cell phone operation to several more beauty shops, a busy garage, a small cafe next to a work-out facility and two Chinese restaurants.

Tucked just to the side of one of  two motels (The Highlander and The Oaks) are several churches. Most prominent is Imani Community Church. Though Imani is quiet now, its Sunday services — with maestro Terrance Kelly (Oakland Interfaith Gospel Choir) directing the choir and fiery Rev. George Cummings preaching — are known far beyond the Laurel.

As the crossroads for major bus lines in all directions, the four corners at 35th pulse with activity. In another week, students will swarm the four corners on their way to the nearby American Indian Charter School or up the hill to Skyline High. Taco Bell draws customers until midnight as does DeFranchi’s Liquors. Farmer Joe’s, a bit forgotten now that its sister store has become a popular destination in the Dimond district, still provides a reliable source of fresh produce and the smart alternative for small grocery items to the neighborhood.

Returning home, the din of traffic recedes as I turn onto Wisconsin where 35th climbs steeply before becoming Redwood Road. A few green lawns persist. Several homeowners grow vegetables and flowers in sturdy planter boxes across the street from the always empty, tiny Peralta Creek Park. I pass several young couples walking their dogs and return home under the shade of the tree-lined street with pleasant yards, many marked with well posted security signs.