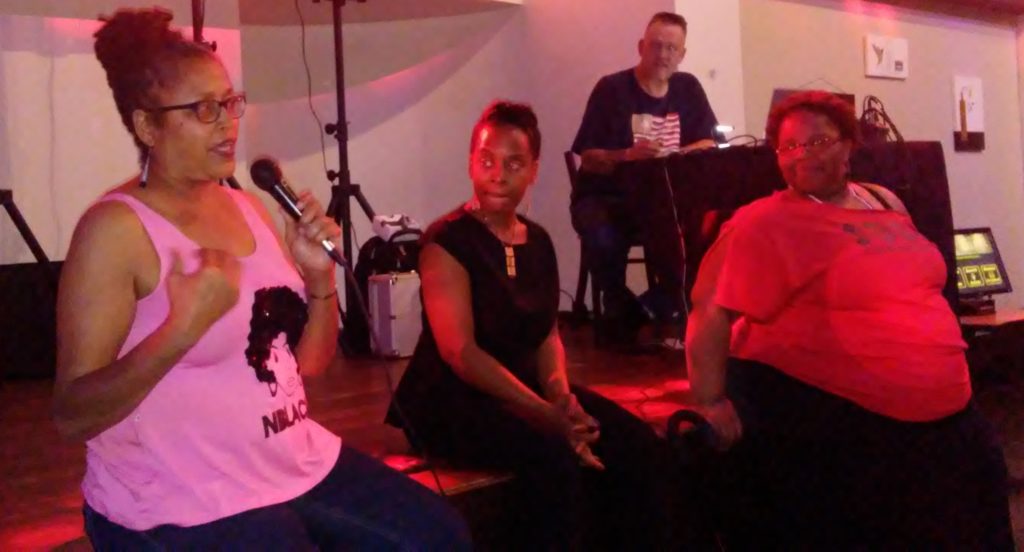 It was election night at the Level 13 Ultra Lounge in downtown Oakland, the venue for the watch party of the three African- American female candidates from the progressive Oakland Justice Coalition. Nehanda Imara and Noni Session ran for Oakland City Council, Districts 7 and 3, respectively, and Kharyshi Wiginton ran for Oakland School Board District 3.  Just a handful of people were gathered, but disco lights flashed, a DJ was setting up the sound system and volunteers were setting out trays of food.

Carroll Fife, campaign manager for all three candidates, was with her young daughter. She was tired after an intense campaign that got off the ground less than four months ago.

She said that she became involved because, like the candidates and their supporters, she is committed to building a movement to “challenge the gatekeepers of the status quo in Oakland” who favor unbridled development and capitulate to big money.

Fife expressed great concern about the high unemployment rate of African Americans in Oakland, and attributed this to many factors, including historic racism; private employers, many of them white and male, not hiring black people; and union halls moving out of Oakland.

“Only around 5 percent of city-funded jobs go to African Americans,” she said, in a city that is 28 percent African American. She advocates for bringing back union halls so African Americans in Oakland can receive training in the building trades and have improved access to employment opportunities. She also wants to see the recommendations of the city’s new Department of Race and Equity fully implemented.

“The community grassroots know me and they asked me to run,” she said when asked why she decided to run against a longtime incumbent, Larry Reid. “It was a calling from the community.” She is active in the State of Black Oakland (SOBO), a coalition of black-led organizations that focuses on improving the lives of black people in Oakland. 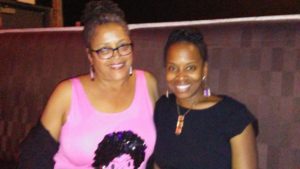 On Tuesday night, she said she was feeling amazed, grateful, and supported, and she pointed out the fact that she took no money from corporations or businesses, instead relying on small donations from individuals from her community.

Kitty Kelly Epstein is active in progressive causes and she was one of the people who encouraged Fife to run the campaign. She said she was impressed that Imara and Session pledged to donate 10 percent of their city salaries to community initiatives if they win their elections, a pledge that inspired other people to do the same. Like the candidates, Epstein said she is very critical of the mantra, “All development is good for Oakland.” 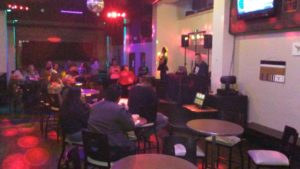 At about 9:15 p.m., Fife gathered the multi-cultural crowd of close to 30 people around the stage. Staying true to the grassroots activism at the foundation of these three campaigns, she got everyone’s attention by calling for a “mic check.” After thanking people for their support, she tied the progressive, grassroots nature of the campaigns to the 50th anniversary of the Black Panther Party.

“In the midst of all the craziness that’s about to pop off in the U.S.,” she said,  “we are trying to do something dynamic.”

With the presidential election results coming in and pointing to a Donald Trump presidency, the smiles and clapping and the celebratory vibe in the room were in stark contrast to the depressing images from Hillary Clinton headquarters on the television screens. In downtown Oakland, it felt less like a campaign event and more like a family gathering.

Fife urged the crowd, most of whom are veteran grassroots Oakland activists, to stay active. “We all have to come together because of what is happening now. We are birthing something beautiful,” she said.

Wiginton told the crowd that she had no ambition to be a politician, but ran because she realized that parents, students, teachers, and even administrators have not been served. “Their needs have not been met,” she said. “Win or lose, there’s so much work to be done. We need to stay woke, get active, and be organized.”

Imara thanked and recognized her supporters and commented on how disappointing many of the city council members have been. “The Oakland City Council may have a darker complexion, but they’re not working on behalf of the community,” she said.

Imara is committed to “trying to clean up and green up East Oakland.” She has been active in the opposition to the “Walmart-sized” crematorium that her opponent Reid has been trying to champion for several years.

Like her two fellow candidates, Imara truly represents commitment to struggle. She has dedicated her life to fighting for issues impacting low income communities of color, but she is also humble enough to acknowledge that she is just one part of a larger struggle that is bigger than her and her East Oakland district. “It’s bigger than hip hop,” she joked, and the crowd laughed heartily in agreement.

Session followed Imara, and with her beaming smile, expressed gratitude and encouraged everyone to keep up the fight. “People showed up for their city. We need to unify and decide our future for ourselves,” she said.

On the night when much of the the country seemed to embrace racism and sexism, these four amazing, strong, African- American  women and their multicultural supporters celebrated their mutual commitment to working hard to bring about positive change and to impact peoples’ lives in a meaningful way. This wasn’t just three campaigns coming to an end, this was the continuation of the grassroots movement for social justice in Oakland. It didn’t really matter that their bids for office didn’t win – this time.