The Chinese philosopher Lao Tze once observed, “[A] journey of a thousand miles begins with a single step.” On Sunday morning, March 22nd, in Oakland, Buddhist monk and peace activist Brother Senji Kanada along with two other Buddhist monks and 15 other supporters began the third day of a three week-long walk to promote nuclear disarmament that will end in New York City.

They quietly paraded down International Boulevard  on their way to Hayward where the day’s walk concluded; they stopped to talk to people at the Catholic Worker offices. Their pilgrimage will take them  through California and Nevada. They will then fly to upstate New York  and walk to New York City, finishing on April 27th, the beginning of the Nuclear Non-Proliferation Review meetings which are held at the United Nations headquarters in New York City every five years. They make the walk every five years.

Clothed in commoner white robes known as a “ciyuan” with an bright orange civara cloth slung over it, Kanada and two other monks are walking to raise awareness about the on-going threat nuclear weapons pose for the world community.

For those born during the Cold War years, the nuclear threat was never far from their minds.  Virtually all elementary school age children alive from the 1950’s to early 1990’s  have memories of the infamous “drop, duck and cover” drills which were part of the federally- mandated civil defense programs from 1951 to 1994.  When ordered to drop, school children ducked under their desks and cradled their heads and necks in their arms. The drills were held each year with the goal of protecting children and teachers from the effects of a nuclear weapons attack.

Those who have come of age since the end of the Cold War in 1991 have virtually no knowledge of the threats of nuclear weapons beyond what they may read in a U.S. history course in high school or college.

Asked why he would bother to walk every five years to promote worldwide nuclear disarmament, Kanada explained that he was born during World War II in Japan.  His parents told him stories of the nuclear attacks.  Furthermore, as the only people to be the victims of a nuclear attack, the Japanese are keenly aware of the horror of such weapons. 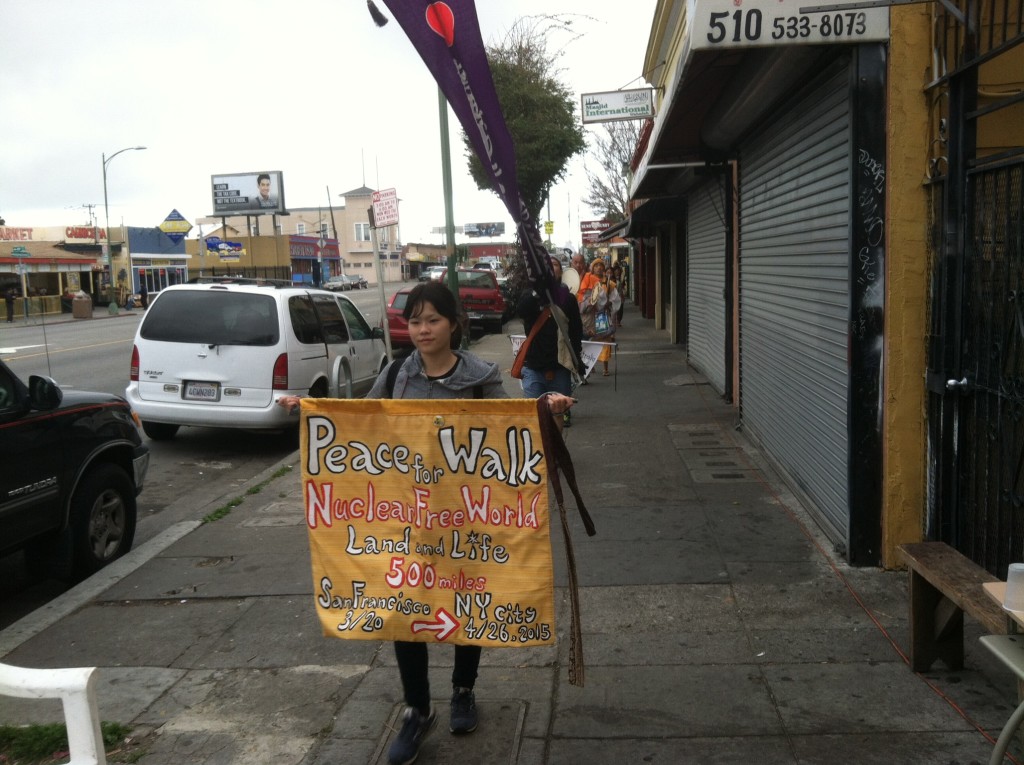 But his response begs further questions about how he may respond to the apparent disinterest in the United States about nuclear weapons.  In the nearly 24 years since the end of the Cold War, there has been a gradual decline in the number of nuclear weapons.  The Stockholm International Peace Research Institute estimated there were  59,880 nuclear warheads  in 1990; there were an estimated 16,383 as of January 2014. These warheads are  held by the eight nuclear-holding nations -the United States, Russia, France, China, theUnited Kingdom, Pakistan, India, Israel and North Korea. The United States has the largest total number of deployed nuclear warheads with 1,920 of 7300 total warheads; Russia has the largest actual number of warheads, 8000, but has fewer deployed than the United States, 1,600.

“It is not easy,” Kanada said stoically when asked about the apparent lack of concern about the threat of nuclear weapons in the U.S. “Most American have not seen pictures of the bombing of Hiroshima and Nagasaki.  Americans don’t know the reality of an atomic weapons attack.”  He said he only hopes the efforts he and others make to raise awareness of the threat of nuclear weapons will eventually make a difference.

Kanada, who lives on Bainbridge Island, Washington,  is part of the Ground Zero Community.  According to the Ground Zero Center for Non-violent Action website, the community was inspired by South Bay resident Robert Aldridge who quit his job at the Lockheed facility where he was directing the development of the Trident system to be sea-launched in the 1970’s. After focusing on the fact he was working on a first-strike weapon, his conscience led him to resign. Then Washington residents Jim and Shelly Doughass and others began the community at the same time the U.S. Navy was forming plans to expand the Bangor base to accommodate Trident-class nuclear warships.

The Buddhists along with an interfaith contingent of religious and lay anti-nuclear activists maintain a periodic vigil at the base, keeping watch and demonstrating against nuclear weapons. Each year there are three major actions – on Martin Luther King, Jr.’s birthday, marking the the original meaning of Mother’s Day in May and remembering the atomic bombings of  Hiroshima-Nagasaki in August.

And now it is not only peace activists like Brother Senji Kanada who are concerned about nuclear attack.  Veteran cold warriors like George Schultz, Sam Nunn, Henry Kissinger and William Perry have weighed in. After co-authoring an op-ed for the Wall Street Journal in 2008, these four have formed the Nuclear Security Project to advocate for the elimination of nuclear weapons.

Lest those of us who reside in the Bay Area dismiss the continued threat of nuclear attack as a unlikely possibility, we may want to stop and consider a simple geography lesson.  One need only peer east a few miles over the Oakland hills to the Lawrence Livermore Laboratory in Livermore or gander south to Sunnyvale where Lockheed-Martin continues to research and design nuclear warheads and ponder the locations that might be targets for a nuclear attack.

As Brother Senji observed the principle task he and his fellow pilgrims pursue is to raise consciousness one-day-at-a time.