Oakland CROP walkers take one step at a time against hunger 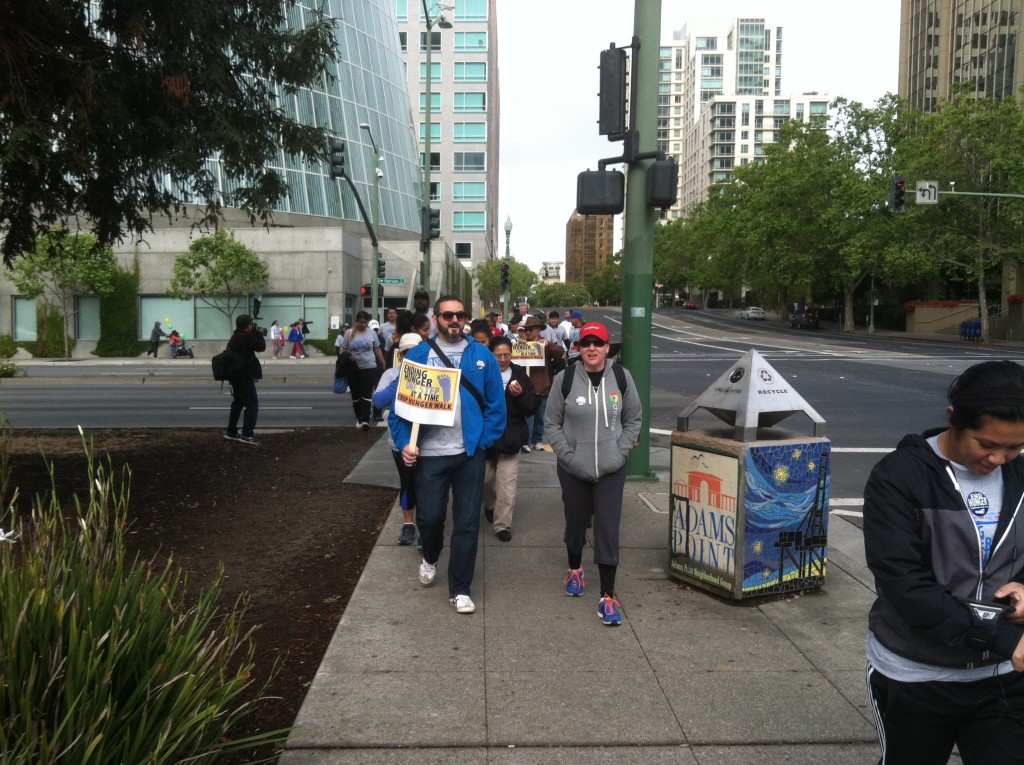 CROP walkers leaving the Cathedral for walk around Lake Merritt

While Bay Area landlords, developers and real estate investors wildly cheer the latest housing boom, spiraling rents and housing prices, a small number of local residents responded Saturday morning to a more somber fact for Oakland residents – the increasing number of people who depend on the Alameda County Food Bank and local pantries for food to make ends meet.

Approximately 75 people ventured out on a breezy, overcast Saturday morning  to participate in the Fifth Annual Communities Responding to Overcome Poverty (CROP) Walk organized by local members of the faith community.  Walkers quietly strolled around Lake Merritt to raise awareness about the problem of  food shortages while raising money for local food service providers and  international faith-based and secular hunger and development organizations. 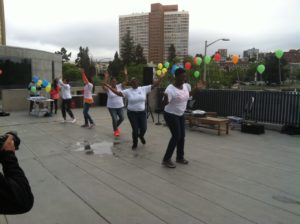 After a rousing welcome, song, dance and a blessing by Fr. Jay Matthews, an Oakland native and rector of the Cathedral of Christ the Light, walkers began the leisurely 5 kilometer walk around Lake Merritt.

Asked why they would extend themselves on a Saturday morning, walkers offered various responses.  Ciaundria Hillard and Rosemary Gutirrez, directors of “God’s Girls”, a San Leandro-based grassroots organization which offers baking, crafts and prayer programs for girls pre-K to 5th grade, said they participated in “one charitable event each year.” Furthermore, they said they believe the CROP Walk is a good cause.

Seniors from St. Elizabeth’s High School, Leslie Magana and Jorge Gomez, saw the walk as a way of increasing awareness and community responsibility to food shortages.  Magana said she felt the walk was one way to end hunger.  “It makes people more aware that many people don’t have enough to eat,” she said.  “I think it helps the community,” Gomez said. 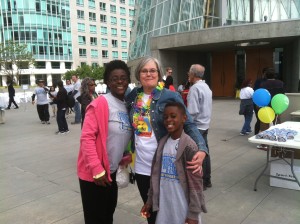 Joan Suflita, lead organizer of the walk, welcomed the walkers and observed that several hundred people had gathered inside the Cathedral of Christ the Light for a conference on Divine Mercy.  Meanwhile, those outside the Cathedral were about to engage in an act of mercy – feeding the hungry.  Since the CROP Walk began in 2011, more than $44,000 has been donated to local and international hunger relief organizations.

According to the Alameda County Food Bank’s 2014 report,  one in five residents, or 311,000 individuals in Oakland now rely on the Food Bank and its member agencies for food.  This is an increase from the one in six in 2010 who utilized Food Bank resources.   Nearly half of food bank clients must choose between paying for food and paying rent/mortgages.  One in five face this choice every month.  More telling,  85 percent of Food Bank clients are food insecure, meaning they do not have enough food to lead a healthy life.  The same study revealed that two-thirds of these households have incomes that fall at or below the federal poverty level ($24,250 income or less four a household of four.)

Suflita, who has been the lead organizer for the walk for three years, said she felt the CROP Walk is one small way to address the problem of hunger and food insecurity.  She also said it is an opportunity for the average person to make an impact.

She encouraged Oaklanders to participate on a greater level.  If they are unable to walk, they can sponsor others. She also pointed to how the event reflected Oakland’s rich heritage of multicultural, interfaith, civic and community engagement around issues of concern.

Four local agencies are also among the recipients of contributions made to the CROP Walk.  The Food Bank, Love Unlimited, St. Vincent de Paul and the Oakland Catholic Worker will share 25 percent  of the proceeds from the CROP Walk.

Though this year’s walk has now ended it’s still possible for concerned members in the community to contribute.  Donations can be made at: www.bayareahungerwalks.org.  Click on the icon for the Oakland CROP Walk and follow the prompts to donate.