The Impact of Impact Fees

Having prayed outside City Hall for the “soul of the city and an end to the housing crisis,” about 60 low- income Oakland residents, housing advocates and clergy filed into the packed March 22 meeting of the city council’s community and economic development (CED) committee. Their chief concerns were the committee’s latest roll-out of the proposed housing impact fee ordinance which included new plans to apply the impact fee across three zones instead of citywide, and to expand it to include moderate- income residents.  Affordable Housing Trust Fund (AHTF). Following the CED’s 3-0 vote in favor three hours later, and their prayers unanswered, they left disappointed, if not angered. 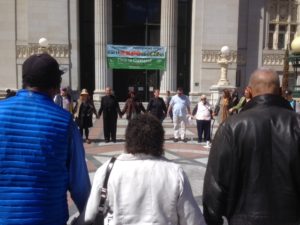 Some background. Last September, the city council’s unanimous adoption of the Housing Equity Road Map (see below) laid out the ways to create funds for much needed housing for Oakland’s poorest residents. Since then, advocates and residents have seen a slow whittling away of the tools which would generate such money. The CED council members counter that one such tool, impact fees, must be put in place cautiously so as not to scare off developers and that the needs of moderate- income residents, like teachers, should also be considered.

Impact fees, a key strategy in the Road Map, have become a common way for California cities to generate affordable funds with the loss of state redevelopment money and cutbacks at the federal level. Essentially, after conducting studies to establish the need for affordable housing and its economic feasibility, cities can levy a fee on market rate housing developments. Fees, either by unit or per square feet, are then collected and administered through an affordable housing fund.

Neighboring Emeryville and Berkeley, among the 27 Bay Area cities that have adopted impact fees, have one city-wide fee of $28,000 per unit of housing. Oakland’s proposed ordinance, however, creates three zones with three different impact fees which, according to city staff, reflect three different market realities. (see below)

Over two dozen speakers lined up to support a single impact fee and against expanding the reach of the funds to moderate income earners.

“There’s no major precedent for this. In all the comparable programs that we’ve researched, they are city-wide, one rate, one fee,” said Zack Murray of the Greenlining Institute.  Acknowledging the needs of residents with moderate incomes, he emphasized that “the burdens are falling most on people of low and very low income and our priorities have to shape that.”

East Oakland resident Teddy K. Miller, and senior associate at Policy Link who helped write the Road Map, reminded the committee that this document “specifically called for impact fees to be targeted to low- income and very low- income households. These households are most vulnerable to displacement and are disproportionately black, brown, red and yellow.” He said the proposal represented a compromise with developers at the expense of Oakland’s poorest residents. 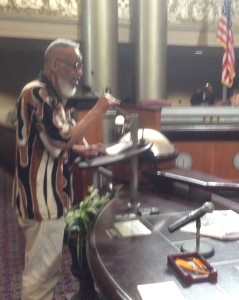 West Oakland resident Guitar Whitfield, himself homeless for a time, lamented the loss of 25 percent of black Oaklanders and urged the CED to “keep affordable housing funds focused on lower income folks.

Following an hour and half of public testimony, Vice Mayor Annie Campbell Washington described the perception that the CED is unaware or insensitive to the housing crisis as “very painful.” She said the policy was “ complicated and complex and we’re dealing with a lot of outside forces beyond our control.” The three zones reflected “not where the money would be spent on affordable housing,” she said, but rather the current market reality where there “is no market rate housing being built in East Oakland.”

Campbell Washington, a former school board member, also pointed out that by expanding the criteria to 120 percent of AMI, a family of four with two teachers might not be forced to leave Oakland.

“I am not ready,” she said, “to give up on the idea of funding housing for educators. Maybe we need to take the label off of it so it doesn’t say 120 percent  of AMI.”

“This is not a question of us not caring about our community as we seek to use these funds in a way that we balance the needs of our community,” Gibson McElhaney said

At Large council member Rebecca Kaplan questioned the advisability of expanding the definition of affordability in the proposal. She suggested taking up the issue separately along with consideration of placing limits on the various qualifying income levels.

Council member Larry Reid, who chaired the meeting, joined Campbell Washington and Gibson McElhaney, with Kaplan abstaining, in recommending that city council pass the ordinance at the April 19 meeting

Though disappointed with the policy shift, activists promised to continue the conversation.

“It is absolutely legitimate to be concerned about folks who are at 120 to 150 percent of the AMI,” said Gloria Bruce of East Bay Housing Organizations. “But for the people who testified at the meeting, the idea of making $100,000 (a threshold) they are not even in that realm. At this moment, I think we just have to look at people who are at the bottom of the income scale.”

– A Roadmap Toward Equity: Housing Solutions for Oakland, California, https://www.policylink.org/sites/default/files/pl-report-oak-housing-070715.pdf

– If approved by city council, fee collection will start September 1 and be phased in at varying rates:

Each zone also includes varying fees for capital improvement (Parks, Fire, Libraries, etc.) and Transportation which, when included, make the final, phased-in fees of $24,000, $19,250, and $13,000 across Zones 1, 2 and 3 respectively. The resulting fees will be deposited in the City’s Affordable Housing Trust Fund (AHTF) to finance affordable housing projects.