A Faith That Bears Good Fruit

Josefina Lopez, the co-founder and proprietor of Corazon del Pueblo on East Oakland’s International Boulevard, may seem an unlikely social activist,  Her mild demeanor and warmth hide a warrior with a  passion for social justice. Her passion was shaped by a childhood where her family’s comparatively poor circumstances, coupled with her lack of mastery of English led her to identify with those who are likewise marginalized.

Her store, co-founded with her late husband Trinidad, is a fitting cap to a lifetime of service to students and the larger community.  Brightly decorated with a wide array of handmade crafts, clothing and books from Mexico and Central America,  Corazon’s mission matches that of its foundress: to educate and confirm the dignity of Mexican-American, Mexican and Central American people whose numbers have grown throughout East Oakland for the past three decades.

Lopez, a retired Oakland  public school elementary school teacher and administrator, explained how the struggles she experienced as the oldest of 12 brothers and sisters in a fifth generation Mexican-American family from New Mexico led her to a lifelong pursuit as an educator and activist in Oakland and the greater East Bay.  Lopez recalled how her struggling parents moved from their home in the small town of  Hernandez, New Mexico northwest of Santa Fe,  to Richmond, CA where her father began working in the shipyards during World War II.  She recalled she didn’t realize she was poor because she and her brothers and sisters were “just living” and busily immersed in a variety of family activities. 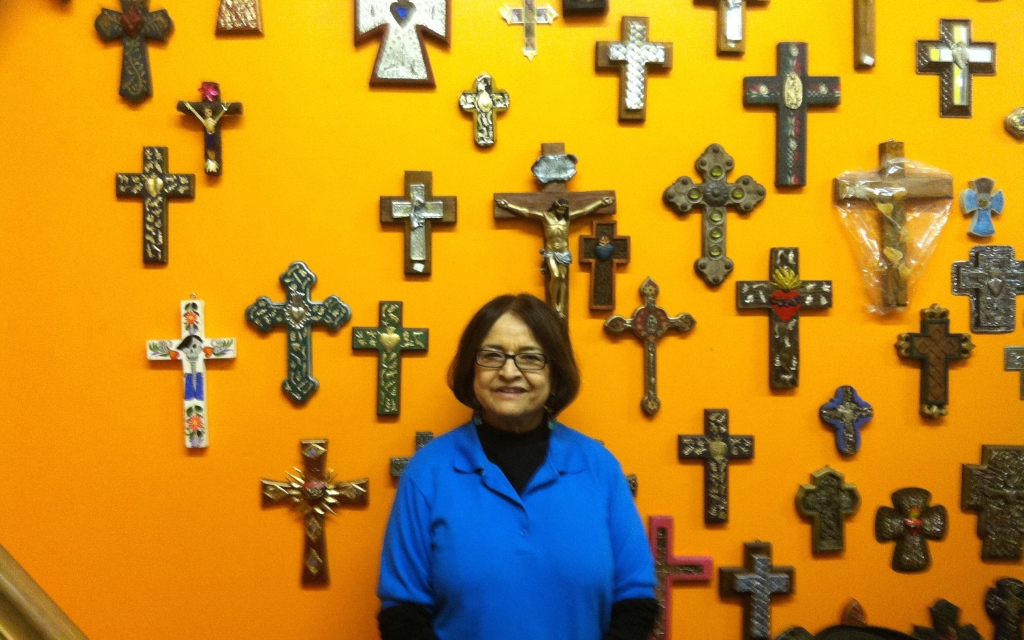 “My first inkling that my family was not as well off as others came when I realized the taquitos my mother rolled and fried for us were not like the neatly-cut, meat-filled sandwiches my classmates in elementary school brought with them each day,” she recalled.

Her desire to become a teacher was sparked in her family.   Her mother had an eighth- grade education while her father had completed third grade.  Her mother encouraged her children to pursue education.  She was also inspired by her grandmother who was a teacher.

When she began school at Peres Elementary School in Richmond in the early 1940’s, she spoke no English.  Furthermore, she had never seen an African-American. There were no bilingual classes at that time, however  she learned English quickly,  She continued her education at Roosevelt Junior High and Richmond HIgh School.  She completed coursework for a general education degree at Samuel Gomper’s Continuation School in 1958.

Family life called to Josefina in 1961 when she married her childhood sweetheart Trinidad Lopez.  whom she met in Richmond.  Over the next eight years the young couple had four children, Martha, David, Anthony and Albert.  To support his growing family, Trinidad worked at the Berkeley Co-op in a supervisorial position, overseeing clerks and baggers.

Education was important to the newlyweds.  Despite her new role as a mother, Josefina continued her education.  She took courses at Contra Costa College in San Pablo in the evenings while Trinidad took care of their children.

In the meantime, Trinidad was taking courses at the Grove Street campus of the City College of Berkeley.

“The Grove Street Campus was a hotbed for student activism,” Lopez recalled. “There were Chicano studies.  I learned about the United Farmworker’s campaign.  We were in the midst of the Third World Strike.  And the Black Panthers were teaching there as well.”

The Fall of 1968 marked the beginning of a deeper more auspicious transformation for the young co-ed when she was enrolled at the University of California, Berkeley.  She remembered the deep gratitude and excitement she felt as she set foot on the Berkeley campus  “I felt like, ‘Am I really hear?’ That was followed by confusion about what a mess things were,” she said.  The demonstrations against the war in Vietnam were escalating. As Josefina began classes, the campus was aflame – literally.  The library had been set on fire. Garbage cans were smoldering and burning. Helicopters flew over the campus.  Tear gas wafted through the autumn air.  Startled and slightly confused by the turmoil, she had to ask fellow classmates what was going on.

Though a native Spanish speaker, she decided to “choose” Spanish as her second language because she realized “how stupid the entire educational system was which discouraged me from speaking Spanish in school,” she said.  In 1971 she visited Cuba as part of a program to study education.  By the time she graduated in 1973 she had decided to become an educator. 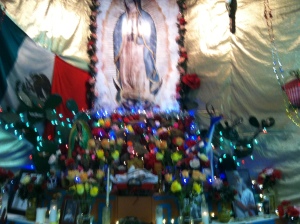 An altar in Corazon del Pueblo

Trinidad was not far behind.  He elected to study economics at U.C. Berkeley.   After graduation he became an appraiser for the City of Oakland   And like his young wife, his political awareness had grown. He became an activist in the Fruitvale District, working for the Spanish-speaking Foundation, organizing various events in the neighborhood.

After graduating, Lopez began combining her career as an educator with her new found political awareness.  Over the next 30 years she worked for the Oakland Public School District as a pioneering elementary school teacher.   Shortly after she began,  she fought with school district administrators to open a small, bi-lingual elementary school in downtown Oakland. La Escuelita educated more than  300 students, most of whom did not speak English. She would continue her advocacy for bi-lingual and mutli-cultural education at Calvin Simmons Junior High  and Hawthorne Elementary School. She  started a student club Latinos Unidos, raised funds to support a narcotics education program and organized Ballet Folklorico which taught a popular Mexican style of folk dancing to her young students..

As an administrator at Highland Elementary School, she discovered many of the teachers were older, less energetic and indifferent.  It was the school district’s way of disposing of teachers they believed to be ineffective. The school was also plagued by the growing ethnic tension between African-American, Asian and the burgeoning Latin American student population. The brutal civil wars in Central America had driven thousands of Salvadoran and Guatemalan families from their homes.  Many sought refuge in cities and towns around the San Francisco Bay Area including East Oakland.

The school was the place where these tensions spilled over.  Latino students were told by some of their African-American classmates to “….go back to El Salvador!” Go back to Guatemala.”  Go back to Mexico”.  Sometimes parents became involved in these disputes.  Confused, upset and angry by the treatment they received from some of these parents.   Latino parents began referring to them as  “las maletas” or the “  wicked ones”. 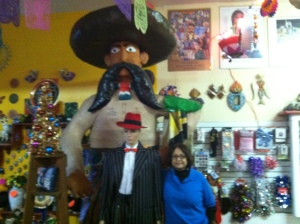 Josefina Lopez in her store

But Lopez was undaunted by these conflicts.  She began working closely with at-risk children, making  home visits to their families. To her great sadness, she often discovered families living in squalid conditions in homes which had been virtually abandoned by absentee landlords.

In 1999 Lopez and her husband began preparing for retirement.  Her husband bought property on International Boulevard and together they opened a small, Mexican craft store, Corazon del Pueblo.  They saw the store as a means of continuing their love for learning, teaching, books and social action.
The store opened slowly occupying only a small, storefront.  However, Josefina began offering classes to local elementary schools teaching students how to make sugar skulls, paper cuttings and candles for various Latin American heritage and cultural events.

Local musician and activist Francisco Herrera, a long-time friend of the Lopez’s, described the significance of Corazon del  Pueblo. “Corazon del Pueblo offered a model of initiative for small business owners.,” he said. “Furthermore, the art, crafts and books they sold promoted the dignity of our people.”

In 2000 her life took an unexpected turn with the death of her husband of 40 years, Trinidad.  Josefina decided to retire from the Oakland Unified School District in 2003.

Lopez looks back at her long career as an educator and activist with a certain satisfaction. “I proved the educational system was wrong.  Though I did not learn to speak English until I was eight years old, I was an excellent student graduating with honors at U.C. Berkeley, I became an excellent teacher not only in the classroom but one widely recognized for multi-cultural workshops offered to teachers throughout the entire school district,” she said.

She is also quite proud of her children.  Three of the four children graduated from U.C. Berkeley and are working in various professional capacities as teachers or  government employees.  Her other son works in construction.

Asked what role her Catholic faith played in her life she responded, “Plenty!  As I child I prayed all the time at St. Mark’s Parish [in Richmond].  My sense of living a purposeful life came from my faith.  My marriage.  My acceptance into U.C. Berkeley and my administrative credential are also gifts of my faith.”   The Lopez family members have been parishioners at St. Elizabeth’s Church in the Fruitvale for years.

And she as received recognition for her work. She was given an award by the United Farmworkers of America in August 2002 saluting her contributions to education, the arts and her concern for social justice    The City Council of Oakland acknowledged the cultural contributions and peacemaking work of Corazon del Pueblo a few years later.  And the City of Berkeley acknowledged her efforts in a resolution signed in 2011.

The Oakland City Council resolution says it all, recognizing the founders of “Corazon del Pueblo for their positive promotion of peace and cultural understanding through the arts and education in the Fruitvale community and for their leadership in the Dia de Los Muertos Celebration throughout the Bay Area.”