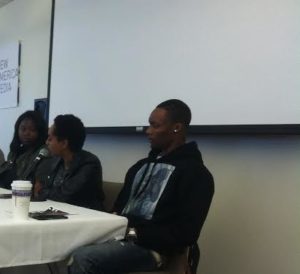 Eighteen- year -olds can vote, enter into legal contracts, serve in the military or be tried as adults. Yet 18-year- olds, with very few exceptions, are entering into the treacherous transitional period between adolescence and adulthood. Despite a number of legal indicators that suggest 18- year -olds are adults, most parents and adults who live and/or work with this age group – not to mention those in the midst of this transition themselves – see it differently.
Newly- emancipated young adults – 18 to 21-years-olds, particularly those who were in foster care – are among the most at-risk groups for homelessness in the San Francisco Bay Area. Their plight was the focus of “Out of Sight, Out of Mind: Young People Who Can’t Go Home.” a conference sponsored by the New American Media in Oakland last month.
Liberty Dycus, now 23, and one of the panelists, said her foster mother was taking care of five other children. “I was the least of her worries,” she said. Her social worker would come out and ask, “‘Are you eating? Do you have clothes on your back? Are you clean?’ And I wouldn’t see her for another year.” She had no guidance. No one to help her plan ahead.
When she turned 19, her foster mother told her she had to fill her space by taking in another child. “I had nowhere to go,” Dycus said. Fortunately, she found a transitional program for young adults where she met weekly with a social worker who laid out options and helped her develop a plan.

Ayanna Rasheed, 21, another of the conference panelists, was grateful for being rescued from a life on the streets at the age of 13. “I stole necessities, clothing, toothpaste and hygiene products, survival items,” she recalled. She found enough stability in the foster system to complete high school. Then she experienced another wake-up call. “Once I turned 18, I couldn’t go home,” she said. She had aged -out of the system and had nowhere to go next.

The young adult panelists offered insight into the particular problems experienced by emancipated young adults. For those in foster care, they start even before they reach age 18. Foster parents can become surrogates for all the wrong reasons, attracted by a stable monthly income. Complaints or threats to report the surrogate parents may be met with counter-threats, retaliation or worse – plans to dump their charges into the streets. Social workers may be dismissive of complaints or so overworked they cannot adequately follow-up. Even grandparents who wanted to raise their grandchildren may be overwhelmed or exhausted.

The California Fostering Connections to Success Act (AB12) , which became law January 1, 2012, is an attempt to provide a safety net for emancipated young adults . It extended the eligibility for foster care to 21. According to the AB 12 website, the extension hopes to allow for a more secure and supervised environment for young adults and give the young adults time to identify the needed educational and employment training opportunities.
Though well-intended, there remain problems. “Some judges see the promises embodied in AB 12 as obligations to be earned rather than rights to be acknowledged,” said Brian Blalock, the conference organizer and director of Bay Area Legal Aid’s Youth Justice Project. “ A young adult’s struggles, difficulty or even failure to comply with the responsibilities expected because of conditions like those noted above are not necessarily taken into consideration.” If they fail to comply and remain eligible, the chance of being homeless increases.
When you consider the dramatically spiraling housing costs around the San Francisco Bay, the absence of solid employment training programs and living wage jobs , only the most indifferent and hardest of hearts among us would fail to see the dilemma facing these struggling young adults.
DeAndre Byrd, the third of the young adult panelists, said he had been in and out of juvenile hall. He was placed in a group home, where he said he learned to take responsibility for his actions. He said AB 12 made a difference for him. “They found me housing. I never thought I would have my own apartment,” he said. He graduated from high school and is in college. “My life is better,” he said.
Conference participants left with the lyrics of an inspiring song written and performed by Nini Hokes. Hokes herself is an emancipated young adult. In “Finding My Life,” she encouraged her listeners to “.dance in mind, body, soul, spirit, love, power, faith and honor.” And dance they must. But lacking a much needed support network, the dance is often more precarious and difficult than one might imagine.