Campaign headquarters was at Everett & Jones barbeque on Broadway in Oakland. The party was set and ready to go at 8 p.m. Green and purple balloon clusters and “Rebecca Kaplan for Mayor” signs decorated the room. There was a diverse crowd of people – hipsters, young people, old people, African Americans, Caucasians, Asians, professionals, and average voters. 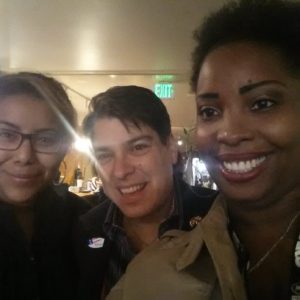 I  had a chance to meet D’wayne Wiggins from the music group Tony Toni Tone, a band that started in Oakland. He stated that he was a Kaplan supporter and felt positive about her being elected. He also stated he had produced an ad in support of her campaign.

At about 9:30 p.m., Kaplan entered the room and she was greeted with lots of cheers from her supporters, her wife, and her parents. Kaplan’s campaign manager, Jason Overman, took the microphone first. He welcomed and congratulated Kaplan on her efforts. ” I want to give a huge personal thank you to everyone who volunteered, who endorsed our campaign, who donated money so our volunteers could have nutrition while they made phone calls,” Overman said. “Thanks to everyone who’s written a Facebook status to spread the word about our campaign, to those who starred in our television ads. Thank you to every single one of you.”

Next Rebecca Kaplan took the microphone.  “From Lower Bottoms to Upper Rockridge, from San Pablo to Seminary, every person in Oakland deserves a safe, healthy and vital future.,” she said. “So tonight the voting is over, the vote counting is not yet over, but more importantly, the work to build a stronger future for Oakland needs to be uplifted and continued in every form. I am incredibly honored to have this opportunity with all of you tonight because we build beautiful things together.”

These were Kaplan’s last words of the night. She ate and mingled with supporters for a short while and then slipped out of the door before 11 p.m.