Exiting the elevator on the 6th Floor of the Oakland Central Suites to cover the mayoral campaign of Joe Tuman, I was surprised to see no signs nor hear sounds of a raucous election evening party. After pausing a moment, I opted to walk down a hall corridor peering as I walked at door after door of nothing more than hotel suites. Halfway down the corridor I stumbled across a small sign marking Tuman’s campaign party.

I entered the suite only to see a comparatively small group of people – no more than 50- lining the perimeter of the room. The candidate stood in front of the room with his wife at his side. He appeared like the college professor he is, speaking calmly, pointedly and with great detail. 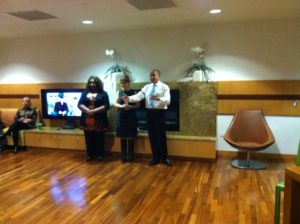 After a few short minutes I determined what I was hearing was a a concession speech. Tuman was in the midst of listing a litany of issues his campaign had raised during the electoral season. I heard “poverty,” a topic which candidates for political office rarely talk about as they search for the safe middle class vote.

Tuman’s election-eve wrap-up seemed to reflect that simple spirit. The room was sparsely decorated. There were a few balloons, but no cascade of colorful campaign signs, banners and the like. A few food trays were placed on  a counter top in the back of the room , while an ice chest filled with bottled water and beer was open on another table.   Nearby, another journalist observed how Mayor Jean Quan’s election night celebrations brimmed with a wild splash of decorations, noise and loud banter. I wondered out loud if such was the evidence of a well-financed campaign. My colleague nodded, observing Tuman’s event was more like a “house party”.

The mood was somber but not sad. Candidate Tuman spoke quietly, punctuating his remarks here and there with colorful asides about humorous moments along the campaign trail. His supporters chortled gleefully, nodding their heads as he reminisced.

He began going around the room thanking various people for their contributions of time, talents and energy to his campaign. Several of those he identified as his former students at San Francisco State University.

I interviewed one of them after Tuman had concluded his remarks. Michael Briggin, a marketing representative, told me he had taken Tuman’s class in current events at SFSU 14 years ago. He observed that Tuman’s class was like a “proving ground” for this mayoral campaign. Tuman encouraged his students to voice their opinions and to be open to different points of view.

Perhaps Briggin’s observation is a fitting summary of Tuman’s campaign. Rich in ideas, sparse on glitz. Though Tuman lost the election, his most important role may have been opening a richer and broader conversation on issues that really matter.