If one judges by simple appearances, the neighborhoods which comprise East Oakland seem to teem with problems.

The murder rate, though down from years past, is still unacceptably high. The frequency of crimes like assault, burglary and drug-dealing contribute to the war-zone like appearance of the neighborhood, with tall wrought-iron fences and barking dogs all too common. The prevalence of car theft drives up insurance costs for motorists living here.

In short, there are no end to the challenges neighbors endure. Yet the deeper human desire for beauty cannot be diminished. Flowers of all sorts abound in the front yards of homes on street corners, sprouting up in the midst of neighborhood blocks or even behind the high fences which protect fearful neighbors. 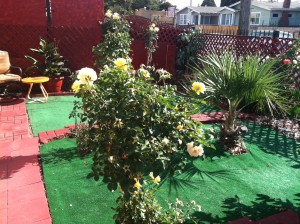 Yellow roses at 81st and Birch 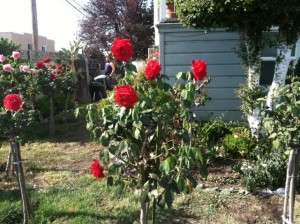 Bright orange, yellow, red roses wave gently in the late afternoon breezes appearing in the most unlikely places. One may stumble upon a luscious rose garden encircling a small house on a block of long rows of deteriorating warehouses.

Morning glories, nasturtiums, datura and daisies carpet narrow strips of soil in front or on the side of houses here and there. Scarlet and purple bougainvillea climb over and sprawl down Befences and walls.

The obvious questions one might pose are “Why bother?” Why go to the time, effort and even expense to demonstrate to those in their neighborhoods that violence and crime do not have the final word? Why is this handful of hearty individuals undaunted by the multiple and complex forces that regularly threaten and destroy life in their neighborhoods? 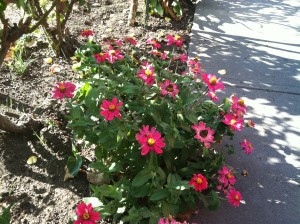 East Oakland neighbors offered varied responses. Ann Turner, who has inherited her home from her parents who lived there for more than 40 years said she keeps flowers growing in her yard , “because my parents loved flowers,” she said. Though her father died several years ago and her mother is now living in a rest home, she spends three to four days a week in her flower garden planting and re- planting daisies which decorate her backyard and tending to the bonsai tree and other annuals which surround her house.

While driving around she always keeps an eye out for new flowers. Seeking new additions to her front and backyard flower beds, she continues the tradition her parents began many years ago. Passersby regularly comment on how beautiful her yard is.

Miquel Dominquez, an East Oakland resident from El Salvador who fled his country’s brutal civil wars in 1990, described how the roses, camellias and bougainvillea which decorate his porch and front yard are a source of many compliments from his neighbors who pass by. “They remind me of El Salvador,” he said. He even retains the names of flowers from his country, according to his daughter. 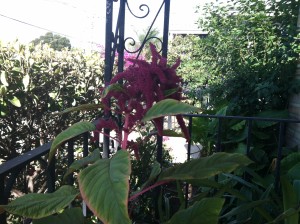 For example, Barba del Rey, a tall slender flowering plant with a deep rich blue blossoms and a tall, shaggy pointed pestle has no English name.

The Molettte family, whose front yard is surrounded by a six- foot tall wrought iron fence,  moved into the neighborhood three years ago. “My wife didn’t like the barren dirt yard which surrounded the front of our home,”  General Molette said. So with meticulous planning, she landscaped the entire L-shaped front yard creating a colorful rock garden gaily decorated with upright rose bushes with pink, yellow and white flowers, a cactus-type plant and vibrant orange trumpet vines adorning it. She spends two hours a day working on the yard tending a wide variety of flowers and plants. The flowers she selected were intended to beautify their yard. According to her husband she receives all kinds of compliments from those walking by who admire her yard. 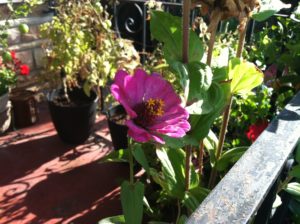 Rafael Navarro who originally hails from Mexico keeps his small, front yard immaculately clean with neatly trimmed trees, shrubs and flowers. He has lived in the house for six years. “The bougainvillea in the  front yard reminds him of those of his native country,” his son explained. Surrounding the house are trumpet vines of various sorts. According to his son, Navarro feels the flowers appeal to those who live in the neighborhood.

Strangely enough with the rough reputation which characterizes these East Oakland neighborhoods on both sides of International Boulevard between 90th and 76th Avenues, none of those interviewed for this story reported any vandalism to their homes or flowers. It is as though even those most inclined towards lawlessness and destructive behaviors possess an innate respect or appreciation for the natural beauty their neighbors gently and arduously nurture in and out of season. 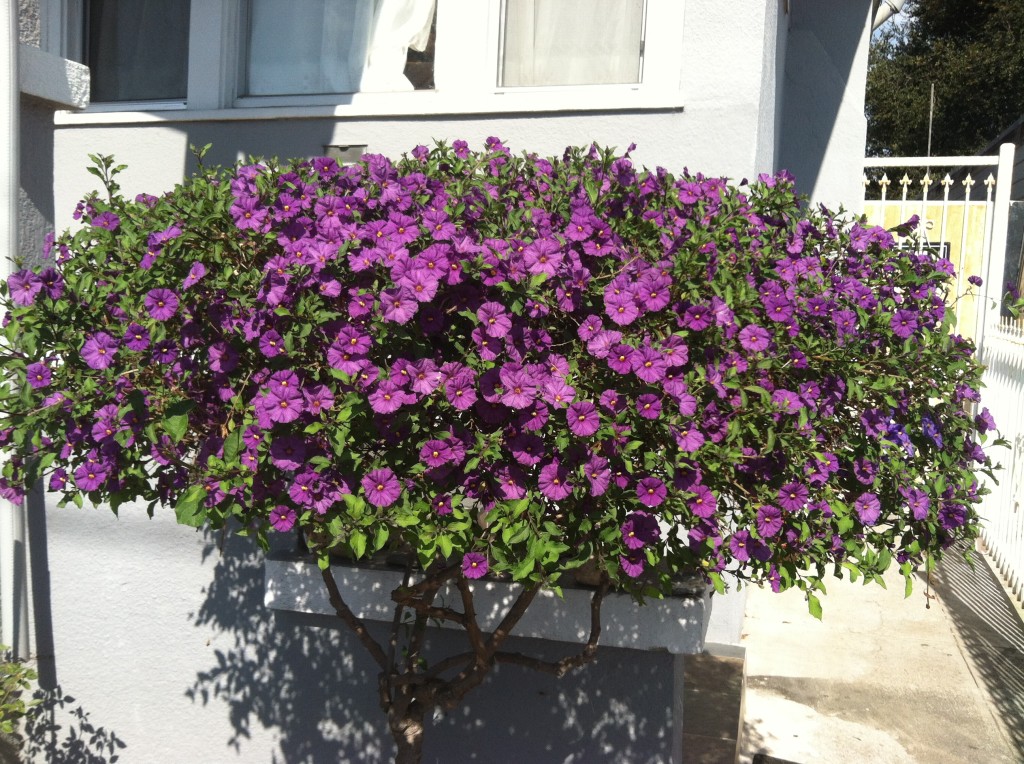 From the perspective of a casual passerby, the time, energy and resources these East Oakland neighbors spend tending their flowers and gardens offer hope and a promise that “another way” is not only possible in dreams, but as a distinct reality to which they give testimony each day by their simple desire to create, elevate and share beauty.