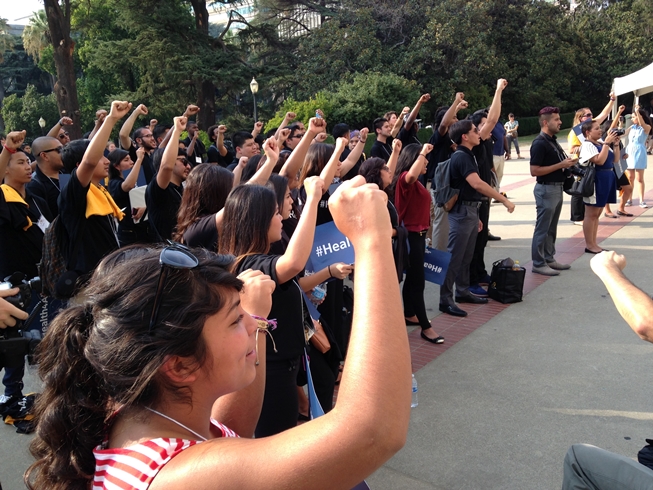 Youth at Advocacy Days in Sacramento

You may not have seen it on the news, but in early August, hundreds of young people from across the state went to Sacramento to talk to legislators and policymakers about the issues affecting them and their communities. The gathering was called Sisters and Brothers at the Capitol 2014.

In California there are 14 cities with high poverty rates and the related problems, including  high rates of violence, homicides, suspension rates, high pregnancy rates, gang affiliation, drug abuse, STDs, and the poor support from the city council. Oakland is one of the 14 and was one of the cities that was represented at the conference.

In the four days the youth stayed in Sacramento, they met in local advocate teams to strategize about how they would approach legislators. They addressed issues such as gender inequality, decline in school funding, overuse of suspensions, health disparities and the need for undocumented people to have access to education and he alt care. They then met with legislators and policymakers. In the process they learned leadership skills, ways to  speak to the representatives of their cities and they associated with other youth from other cites.  And lastly, they had fun.

One of the youth that went was Luis Ramirez a 16- year- old Latino, from Boys and Men of Color. Luis gave some opinions on his experience: “As a youth of color I felt pretty nervous about meeting the representatives because, what if they didn’t care about the issues we are struggling with? What if they are too busy or don’t really care? What if they are meeting us for publicity?”

Like Luis, other youth said they were also nervous and had many of these thoughts before they spoke to the representatives of the different sites. Luis not only represents Boys and Men of Color, but EOBHC as well. (Building Healthy Communities is a state- wide organization that helps low income communities such as East Oakland, South L.A and Eastern Coachella.)

Luis also said ” I did learn something new while in Sacramento. I learned that everywhere in California we are all facing the same issues and struggles which is why communities need equity not just equality.”

Many of the youth learned about new laws and some of the struggles that other cities are facing. They learned  that by making partnerships with other cites, they can really make a change in their community.

As one of the youth from East Oakland, I was able to get a better understanding of the issues these cities face. For example,  Oakland faces  homicides and violence while Long Beach is struggling because the health center and sex education classes were eliminated in the high schools  due to budget cuts.  Each city had a story to tell that should enlighten the decisions of the state representatives.