Where the Kids Are 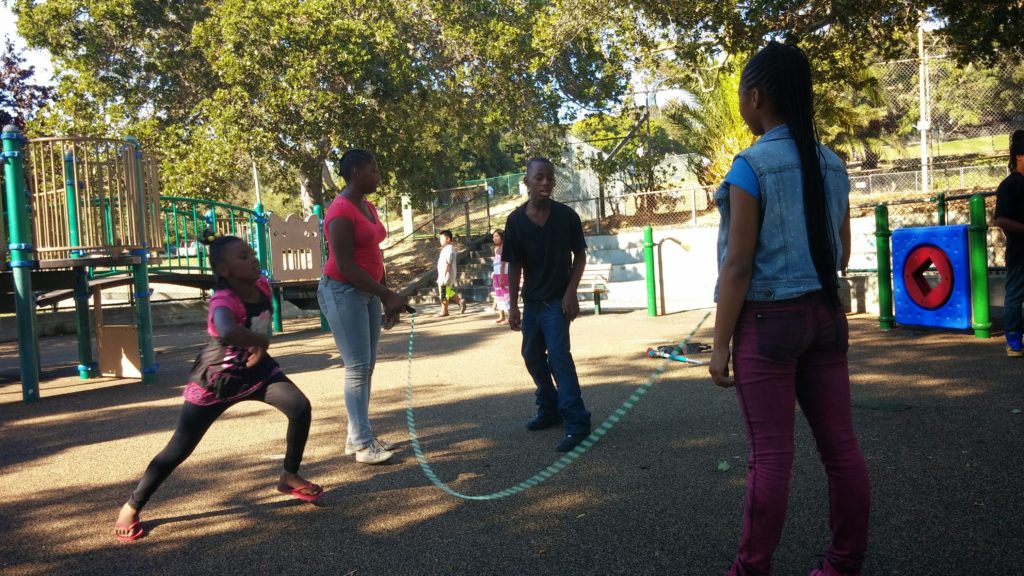 A few months ago, I took a group of neighborhood kids up to the end of our block to a big old oak tree. We slung a rope over a low-hanging branch, tied it, and I watched the kids swing and tussle for a turn as the day wound down. The scene was like something out of Huck Finn, though instead of a pond and a grassy bank as our backdrop, we played over the sidewalk.

We returned the next day to find the rope gone. The owner of the house next to the tree ended up cutting it down; he didn’t like the noise the kids made and thought it was too dangerous over the rocks and concrete. I counter-argued that these kids have no place to go in our neighborhood– no places to play that are close and clean, no grassy lawns to kick around in. The parks are often too difficult to get to, too dangerous to be at. I was indignant at the loss of our rope swing, but my neighbor had a point. The whole thing got me thinking: Where do kids go when school is out? Where should they go?

The official data on this is all over the place: anywhere from 10 to 25 percent of all school children use after school/summer programs. According to the findings of this study by Afterschool Alliance, families in low-income communities tend to do so more than their wealthier counterparts when cost and transportation aren’t an issue. The study states “More than half of families in the African-American and Latino communities would enroll their kids in after-school programs if some were available.” But often for the people I talked to, after school and summer programs are full too quickly, or difficult to arrange transportation to and from, or simply cost too much. 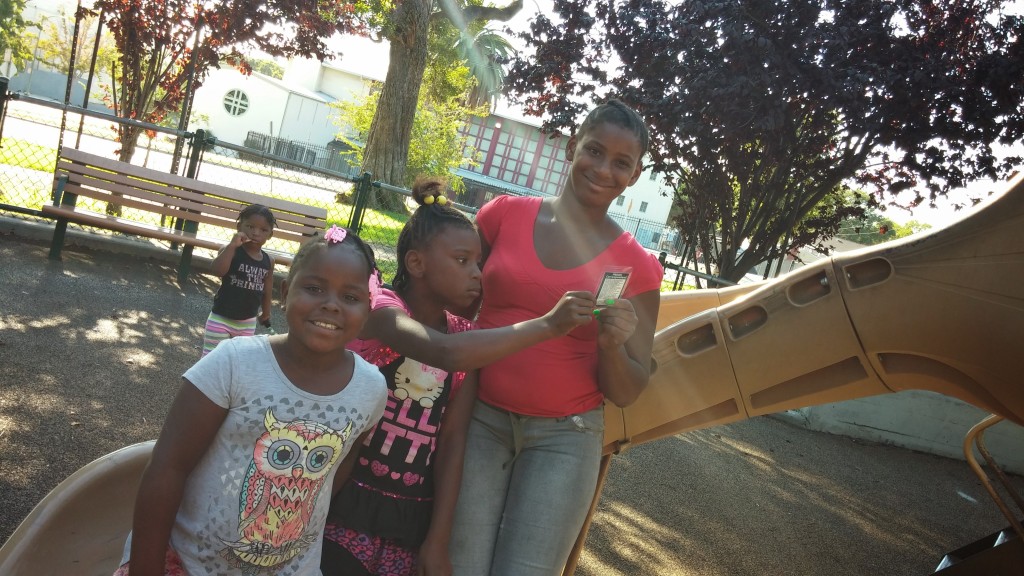 I started looking at the groups of children I met at nearby playgrounds. Trinity McKinney and Jayden Martin, ages 9 and 10, take their cousins to San Antonio Park to kill time when their mothers go to the store. “Sometimes our mom tells us to get out of the house and play somewhere,” said Trinity. “Our house is small and we never get to play inside.” Once in a while they go to the beach with their mothers, but the bus transfers take a long time. “We clean, we play ‘Mr. Fox’. Our mom says if you’re bored, find something to do,” Trinity said.

As the sun filtered lower through the trees surrounding San Antonio park’s playground, Trinity, Jayden, and a few other kids hanging around played jump rope and snacked on chips and candy, but Jayden’s youngest cousin of about 18 months started crying because he was still hungry. They saw a Vietnamese mother with grocery bags, and after the girls asked, she gave all the children some taro root to chew on. Food, and where it comes from, is a big issue with the kids I talked to. The benefits of good nutrition are well-documented, and of course anyone who has spent time with young people knows they are hungry (almost) all the time, and find comfort in knowing where their next meal is coming from. 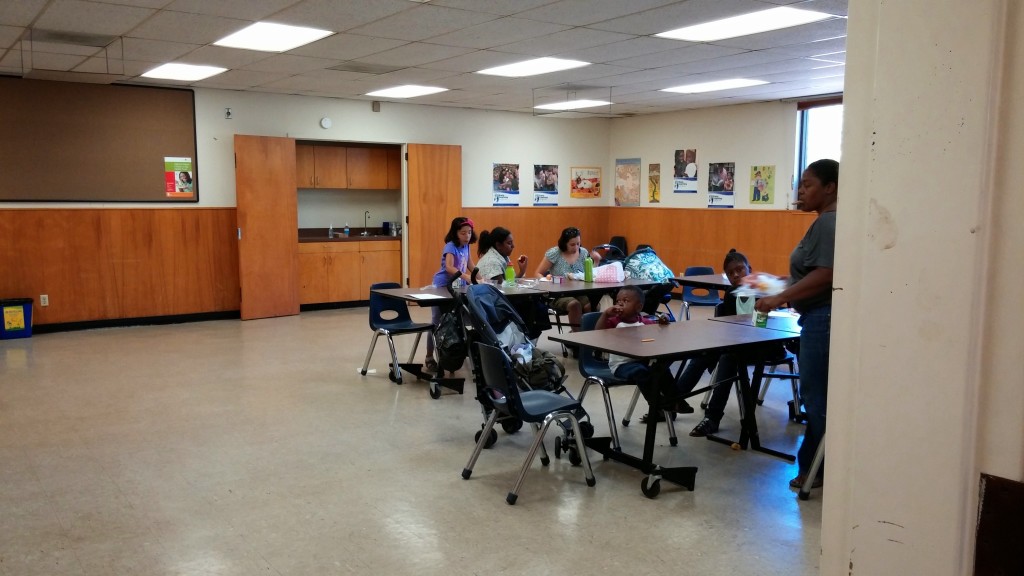 The last few families finish up their lunches at Dimond Library

I spoke with Anna Griffin, who works for the Summer Food Service Program (SFSP) that serves nutritious free lunches to children in various community hubs throughout East Oakland. (In my neighborhood alone there are distribution centers at Dimond Library, Franklin Elementary, Harbor House, and F.M. Smith Park). She said she sees large family groups come in to the Cesar Chavez Library where they served up to 50 lunches a day (tacos and barbecue chicken are consistent favorites).

I asked her what the vibe was like. Do the kids enjoy it? “Yes, it turns into a big social outing.” she said. “My favorite groups are the large families with older teenagers. They bring the younger ones in to eat while they hang out with their friends around the library. But when they come to get the younger kids, I ask them on their way out the door if they want to eat. They almost always say, ” Yes.’”

Marcos Mendoza, a 17- year- old at Dewey Academy, soon to be on his way to college, recalls skateboarding around town just to find places to eat. “I like weird food. I took my friends to the Rockin’ Crawfish restaurant. That’s my favorite.”

Mendoza also worked with Trybe, a neighborhood youth group based out of the Bella Vista area. Earlier this summer, a group of young men took the playground up as a place to hang out. They were seen smoking, and some wore law enforcement ankle tracker bracelets. One night in August, the park was vandalized– tire tracks were on the ground, and a newly-laid mosaic pathway was torn apart. Trybe helped with the clean-up, and adults involved with the Bella Vista park and Trybe confronted the teens who had been in the park, then offered them a job helping local schools prepare for the new school year.

In a way, there’s a strong group accountability– older and younger siblings, extended families, adults mentoring kids– when it comes to taking care of one another when there aren’t many places to go. Peyton Carter, a teacher and tutor at Oakland High School, sees lots of resources, but a need for adults to step in. “At (Oakland high school), we have a recording studio, a hip-hop dance group, a homework center. We just need teachers to get organized so we can use our time to help,” Carter said.

Jennyfer and Josselyn explain the rules of “Wall Ball”, a game they play at their apartment complex.

It seems kids everywhere will gladly take advantage of after school programs until they become too expensive. Financial assistance and space are limited too, and many children I spoke to get turned away for lack of resources. Or sometimes, as in the case of Trinity and her family, they just need a place to play.