I have been reflecting on the situation in Ferguson, Missouri regarding the shooting of an unarmed African-American teenager. It is difficult not to. I see it in the morning and evening news, hear people talking about it in public and it is all over my social media sites. The social unrest in response to the shooting has many social activists on social media calling the situation as a “revolution” or a “rebellion”. I set out to talk to neighbors of my Fruitvale community to hear their perspective.

I met with three individuals who had just sat down in their backyard to enjoy their dinner. Their young children played around us as they enjoyed their food as well. I began my interview with a young man by the name of Ruben Leal. Born and raised in Oakland, he told me he is “scared” of the police because in his opinion there is no police accountability—others in the group also chimed in with agreement and anger. They pointed to recent cases where police have shot and killed people of color. They specifically mentioned Oscar Grant, Alex Nieto and Andy Lopez and felt as if in these cases police did not seem to receive equitable punishments like many other citizens would have received if they shot and killed them.  In each of these cases people mobilized and turned to the streets to share their concerns, frustrations and in some cases their rage. I have followed some of these cases and I too share some of the frustrations and concerns people have expressed during protests. Leal seemed passionately concerned as well.

I also spoke to Leslie “La Dime” Lopez who told me it was “too bad that it takes a negative situation to have community unite”. Lopez feels like the situation in Ferguson is the beginning of a “revolution”.

“People in Oakland and Ferguson are scared and people are tired of violence, violence between each other [Black on Black, Brown on Brown or Brown and Black.] It is frustrating to hear people [outside of minority communities] say we do not care about each other, our community or hear people say they [people of color] kill each other any way.” Lopez said. “Young men of color are fed up with being shut down, stereotyped and murdered.  We already have too much pain [in our community] because we are already hurting ourselves but we do care [about the violence we do to each other]!”

“People in my community constantly ask themselves who’s next,”  Lopez continued.  “As a mother of a young boy,I am scared for him, [I ask myself] is it safe for him to live here?”

As a Public Health Practitioner, I understand how poverty, education and inadequate housing influence health outcomes.  In order to ameliorate these health outcomes one needs to go upstream or to the roots to fix the issue.  So when people from communities impacted by these negative health producing conditions are also exposed to police brutality, it really angers me.

“People are protesting and rebelling because they are scared they or their family may be next. These are real life scenarios,” said Lopez’s husband. He did not want his name used because of his job.  “People’s lives matter. I work everyday and I [worry] about violence everyday!” As he said this he was looking at his toddler. It was a very powerful and emotional moment. 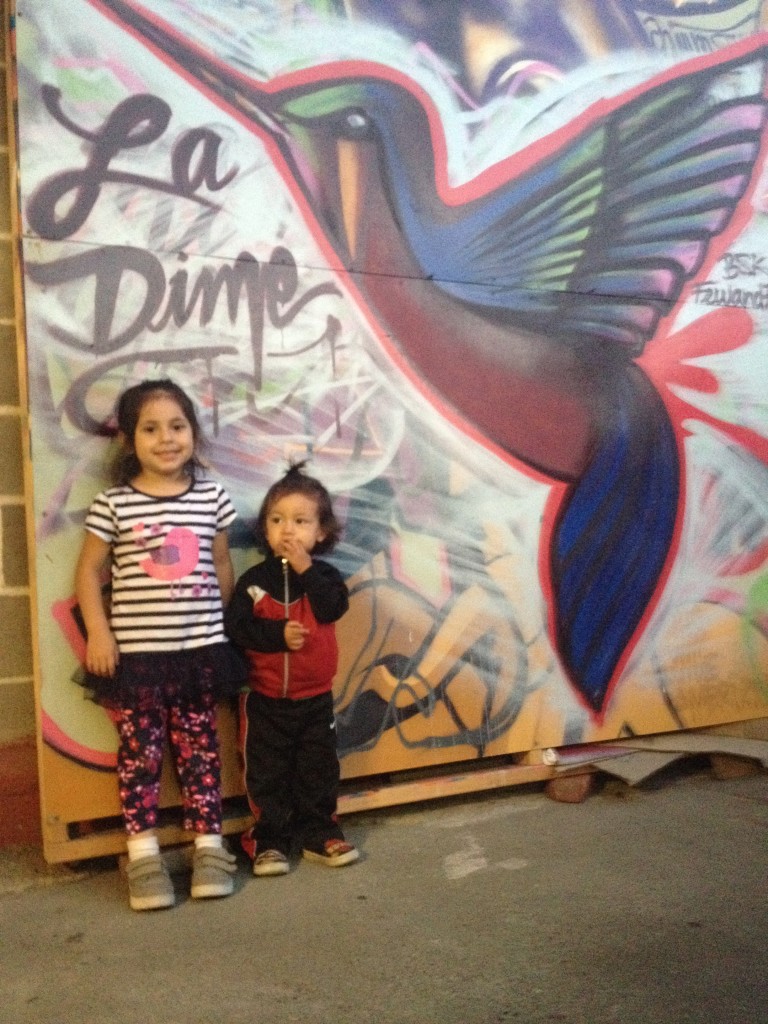 In the backdrop of their backyard is a large, colorful and beautiful mural of a hummingbird. Lopez, who created the piece, said, “the hummingbird represents the spirits of the fallen warriors”. I asked if I could take a picture of the piece, and for Lopez and Leal, it was important for them that their children be in the photograph. To me, it meant the importance to keep fighting for the sake of their kids.

(I want to thank all the interviewees for their hospitality.)