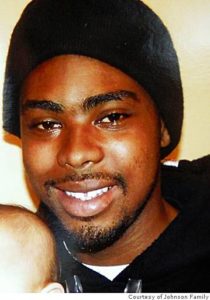 When the verdict for the officer guilty of the shooting of Oscar Grant was issued, you could sense the tension in the air. None of the looting or rioting had occurred yet, though those are the only images that come to mind today. In fact, what I saw was a couple of miles away from the chaos of downtown Oakland, a few blocks over the hill from where I live.

A small group of people, maybe 40 or so, sat outside the home of (I believe) Oscar Grants’ relatives. There was no violence, no destruction of property that I know of. People simply…gathered. They gathered to console each other over the loss of another young African- American man, and protest the leniency shown to the law officer who took that life. I saw the red glow of road flares put out by the police surrounding the group, and the thrum of the helicopter blades circling overhead.

I watched from the top of a hill for a few moments and returned home, wondering if the situation would “break” or if I should leave the area with my infant daughter. I flipped between news stations looking to see what was happening, looking for information. Finally, an image of my neighborhood came on screen. But now, instead of the protesters standing on their feet, they were sitting on the curb, some with hands bound behind their backs. It seemed like a smoke bomb had gone off at some point, putting the scene in a horror movie red and blue haze created by the road flares and the siren lights.

I don’t know the whole story of what happened there. In fact all evidence of the event I saw seems to have disappeared under the sensational images of broken glass, or stories of looters from out-of-town raiding a jewelry shop. What I saw was one small brush stroke in a picture that is currently playing out in Ferguson.

In the case of Ferguson, Michael Brown was shot six times and was left to bleed out for hours after an altercation with a police officer. This sparked a justifiable outcry in the community and the nation, marked by the same anguish we saw at the Oscar Grant verdict here in Oakland in 2010. It is the same torment people felt with Trayvon Martin prior to that, or Rodney King before that. It seems that this scenario, one of brutal, excessive force used against a young black man, replays itself over and over. And it seems that nobody has the power to stop it, including the law enforcement system itself.

The history of police brutality/ excessive force here in Oakland has been a long and storied one. My closest neighbors are political refugees, Black Panthers, and Occupy protesters, and their legacy of pushing back against the power of the police is also part of this story. The protesters in Ferguson who marched peacefully against officers outfitted with rifles and wearing military camouflage are an uncanny echo of an Oscar Grant protest I saw a few years ago.

When we at Oakland Voices were asked to comment on the events in Ferguson, I thought I should probably pass. As a white middle- aged woman, I am literally the last demographic that would ever be targeted by police. But Michael Brown, the teenager who was killed in the streets of Ferguson, did not have even a shred of that luxury, and he died for it. And that is why I should say something, instead of standing quietly on a hill, bewildered and worried.