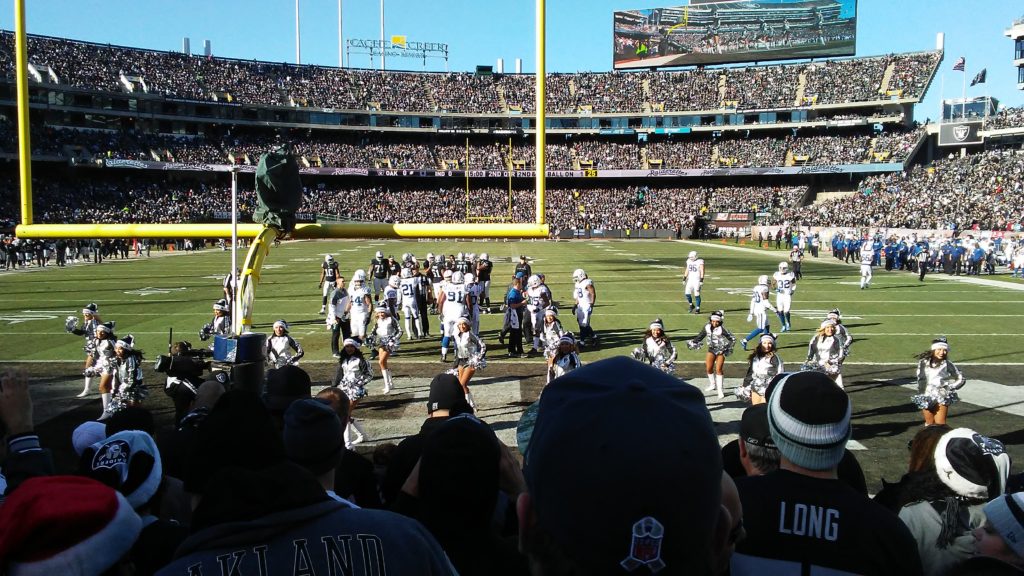 There are 31 stadiums in the National Football League, and then there’s the Coliseum in East Oakland. Aside from a 12-year fling with Los Angeles, the Raiders have called Oakland their home since 1960. Late owner Al Davis specifically crafted the Raiders iconic brand to reflect their gritty, multicultural, politically conscious, working class hometown.

Like that hometown, the Raiders’ future looks bright. Despite an end of the season collapse that postponed a full return to glory, the Raiders ended a 14-year playoff drought and have a talented young nucleus.

However, the storied Raiders franchise is also rumored to be leaving Oakland for a second time. Current owner Mark Davis has been working hard to get a new stadium. He tried unsuccessfully to move the team back to LA last year, and now has public money committed to a new stadium in Las Vegas if the other NFL owners consent to such a move (and he ponies up the half billion dollar relocation fee).

Here in East Oakland, on game day, the Raider Nation congregates in silver and black in what is usually the best weather in the NFL.

Every other fan base knows that the Raider Nation travels well. It’s true for homes games too. The Oakland Coliseum is easily accessible by BART, Amtrak, freeway, and the Oakland International Airport.

On Christmas Eve, when the Raiders hosted the Indianapolis Colts in the last home game of the season, I walked to the BART station and stepped onto a Coliseum-bound train. Also on that train was Barbara Turner and her 9 year-old niece, Alana Crudup. While both wore black, Turner was not rockin’ the shield, and was quick to admit that, unlike Crudup, she isn’t a Raider fan. Despite her allegiance to another team, Turner had taken Crudup to her first Raider game when she was still a baby, and was now taking her to her second game as a Christmas gift.

I walked across the bridge from BART to the Coliseum, navigating between aggressive hot dog vendors and men who always “need” tickets before every game.

The parking lot was filled with the sounds of classic west coast hip hop, R&B, and Latin music. There were even multiple live bands.

Savory scents filled the air. Ribs were being smoked, carnitas were simmering, and even an entire pig was being spit-roasted.

All the while, vendors patrolled the parking lot hawking bootleg merchandise.

“I’ve tailgated all over the world, and there’s nothing like Oakland,” says Cynthia Chavarria of the Oakland Raiders Booster Club. “You can’t duplicate the atmosphere.”

A fifth-generation Raider fan (the third of four successive generations of women), she has been to Raider games in 19 other NFL cities, and plans to attend games at all of the others as well. She even followed the team to London and Mexico City, and has been to the Pro Bowl in Hawaii. She admits that Chicago has one group that tailgates as hard as Raider fans, but “Oakland has hundreds.”

What Chavarria loves most about being a Raider fan are the friendships that she has made. For 20 years, she has been showing up as early as 5 a.m. to line up with others, some of whom arrived the night before to ensure their preferred spots in the parking lot. People walk around sharing hot coffee, the vibe is inclusive, and there is a strong sense of community.

“There is NO venue on a Sunday that is as diverse, energetic, inclusive, powerful, and unifying as an Oakland Raiders tailgate!” agrees John Jones III, a member of the 66th Mob.

An activist and life coach for at-risk youth, Jones says that the Raider image symbolizes the “enemy” of the status quo, something that groups who are criminalized or even just marginalized in this society can relate with.

“It empowers anyone who has been ostracized.”

The pirate image is also somehow simultaneously a metaphor for anarchy, democracy, and capitalism, and resonates with fans from all walks of life from all around the globe.

As for the violence inherent in the image, Jones points out, “Life in the inner city is violent.”

“Sports is not the source or cause of that violence, but it can be a productive outlet for the frustration of living in a violent environment,” he says.

Emilia Sanchez has had season tickets with her brother, Erick, for five years. They went to Mexico City this year, and while tailgating in the parking lot of Azteca stadium, these two East Oaklanders ran into their Coliseum seat neighbors, Cathy and Ed Marshall. The Marshalls fly down from their home state of Alaska for every Raiders home game.

Lifelong fan Mike Hutchinson, one of few Oaklanders who sit in the infamous “Black Hole,” hasn’t missed a game in Oakland since 1979. He inherited his season tickets, which have been in his family since 1960, from his mother when she became pregnant with his younger brother.

Hutchinson says it makes him laugh when he hears people say that the Black Hole is a dangerous place. While it is full of extremely passionate fans, die-hard season ticket holders generally don’t want to lose their season ticket privileges.

“It’s actually the safest place. We all basically know each other.”

Hutchinson says that some long-time fans stopped coming during the “14 years of garbage football” that the Raiders seem to be clawing their way out of, but die-hard newbies have replaced them and the Black Hole has otherwise remained fairly constant.

The ticket prices certainly had remained fairly constant up until now. Hutchinson doesn’t have a problem with the rising ticket prices that have accompanied the team’s on-field success, as they are still the lowest in Bay Area pro sports.

However, he is adamantly against a new stadium, as he believes that it would price out many Raider faithful and break up the Black Hole as well. Rather than build a brand new stadium, something that he equated to the further “gentrification” of Oakland sports, he calls for renovating the existing stadium, something that is usually the responsibility of the landlord, not the tenant.

Known for keeping it real, Hutchinson cuts to the chase on the stadium issue: “You gotta untarp before you start talking about building a new stadium.”

Chavarria adds that the powers-that-be are trying to eliminate tailgating throughout the NFL because people bringing their own food and drinks cuts into corporate profits, and she has publicly advocated against a new stadium anywhere if the vibe in the parking lot will be different.

“We’re blue collar, we don’t need all the frills and thrills,” she says.

With regards to the team moving away, Jones said, “Oakland is the Raiders, and the Raiders are Oakland. You can’t separate the two. Everything that makes Oakland Oakland makes the Raiders the Raiders.”

Moving forward after the dream season ended with the nightmare before Christmas, many Raider fans see reason for optimism, and all will remain loyal anyway.

“We are not bandwagon fans,” Sanchez says. “The odds are always against us and everyone else expects us to fail, but since we have accepted our underdog status, the best revenge is sticking together and supporting our team while it betters itself.”

“I will be a Raider fan ‘til the day I die…and even in the grave,” Chavarria adds.

Regarding the success that the Raiders did enjoy this season, Jones reflects fondly, “We needed this, especially with everything that’s going on. Activism separates people. Even church is segregated. Only the Raider Nation unifies everyone.”

Today, mainstream media depicts a Panther demise into pimping, drug-dealing and gangbanging, but that history is questioned and should not remain as the Party’s legacy. In 1968, the police were the soldiers of a racist system and acted with impunity. The Panthers offered black communities much-needed protection, and through good works like teaching and feeding children, empowered and mobilized people to stand up against racial violence and rampant police brutality. […]

I asked her what she would say directly to Lam if she could speak to him. At first, she was silent. And after a moment, tears flowed from her eyes, and her mother followed suit. Soon, all three of us were crying. What can someone say to someone else who caused such grievous injury? Finally, she just said that she would ask, “Why did you do this?” She said there was nothing Lam could say to her. […]

It’s time again for West Oakland’s annual Juneteenth Celebration.  Presented this year by the B-H Brilliant Minds Project, the festivities will held on June 27th, 11 AM to 6 PM, at 3233 Market St. […]