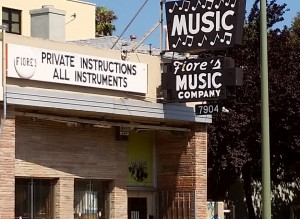 I found it strange the  most southern portion of Oakland was called East Oakland, when I arrived in the Bay Area the summer of 1969. Now some call parts of East Oakland, “Deep in the E.” I’m not sure where it’s located and this article explores that conundrum.

The Fiore family immigrated from Italy and settled first in West Oakland, then relocated to the Fruitvale District, before following the MacArthur corridor south into East Oakland. Mr. Jack Fiore was born in Italy in 1919 and his father told him, “Stay where you make your money.” Unlike many of those founding East Oakland families, Mr. Fiore elected to stay. He has owned and operated Fiore’s Music Company at 7904 MacArthur Blvd. since 1933 and has lived a few miles southeast of his business for 53 years. Married for 75 years and widowed 7 years ago, his family helped establish Saint Paschal Catholic Church.

When I asked him about the neighborhood surrounding his business, he said, “I wish the police would walk the beat to help make people feel safer.” He then smiled and said, “I believe the neighborhood will improve.”

Regrettably, many of Mr. Fiore’s peers didn’t share his optimism about East Oakland and sold their properties when the non white population expanded. Industry soon followed, converting East Oakland into an opportunity desert. This is what some refer to now as, “Deep in the E.” When I asked Mr. Fiore about, “Deep in the E,” he looked at me a little confused and said, “What did you say?” His parting handshake was firm for a 95- year-old.

When I asked Ms. Sara Langer Rowley, a fellow Oakland Voice Cohort, why she lives at East 20th and 11th Ave she said, “If you want East Oakland to change, healthy families must be the change agents.” A Denver transplant, Ms Rowley says, “East Oakland seems more like the southern portion of Oakland instead of eastern,” and she thinks, “Deep in the E,” means the flats between 580 and 880 and begins near Bancroft and 55th. Another cohort member says, “Deep in the E,” begins near 73rd, while another says 82nd Ave. The above respondents were either in their 30s or 20s and agreed, “Deep in the E,” stretched south to the San Leandro border.

Officer J. Bianchi says the Oakland Police Department considers that, “Deep in the E,” starts at 98th Ave and continues to the San Leandro border. My wife, Monica, and I met Officer Bianchi around 1:00 AM when we were stranded at the Coliseum BART Station, after we had returned from Philadelphia, Pennsylvania, and no cabs were available to pick us up. Monica suggested we call the police for assistance. I was opposed to her idea. Fortunately for us, Officer J. Bianchi arrived for another police matter and agreed to take us home.

During our ride home, we listened to his sometime dire description of, “Deep in the E.” A tale of woe that reminded me of a pressure cooker pot waiting to explode. Unfortunately, social frictions and lack of economic opportunities could detonate that pot.

In future articles, I’ll explore the role of, “community change agents,” in relieving the pot’s pressure and returning stability to, “Deep in the E.”

In the meantime Oaklanders reap daily benefits from Police Officers like Mr. Bianchi.