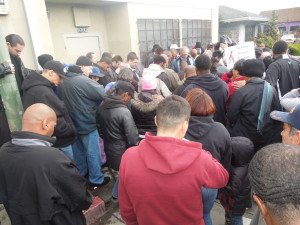 As our death rates increase, community members came together on December 29, 2012, on the corner of 92nd and International Blvd. to mourn for the cell phone store owner, Wilbur Bartley, who was gunned down during a robbery two months ago. Churches all over Oakland partnered to create awareness about the issue of gun violence with other Oakland residents.

The gathering was one of many “peace stands,” held by Soldiers Against Violence Everywhere (SAVE) every Saturday throughout many different neighborhoods all over Oakland. SAVE was created by Pastor Zachary E. Carey of True Vine Ministries to raise awareness about the crisis of gun violence in our city, Oakland – helped lead the gathering.

As I approached the peace stand on 92nd and International Blvd., anti-violence protesters prayed in a circle, in unity, in hopes of one day seeing the change they advocate for. Then they split up into smaller groups and spread throughout International  in different groups chanting “Throw your peace signs up!”

SAVE describes our city’s crisis with gun violence as a public health issue that can no longer be tolerated in our communities. Its mission is to build community and ensure safety in our streets and neighborhoods. The group encourages residents to break the silence, speak out, and take a non-violent stand against the rampant murders in our communities.  SAVE is a citywide, grassroots movement to provide resources and solutions for a more peaceful existence in Oakland.

As cars in traffic passed by honking and putting their peace signs out their car windows, they continued chanting, “Somebody died here, we need to care!” “Increase the peace, not the violence!” “Don’t take a life, save a life!”

Ashley Lindsay, an active member of True Vine Ministries in West Oakland, comes out every Saturday with her young son, Kalani Conner.

Lindsay expressed that we need to act as a community no matter how long it takes, “We need to speak on what we see out here. And we know who they are. We want peace in the streets,” she said.

Pastor Gregory Payton is president of the Baptist Minister Union of Oakland and pastor of Greater St. John in West Oakland. He described gun violence in Oakland as a national epidemic.

“We’re gonna have to be active,” he said, calling on  residents, city officials, the mayor and the governor to work toward solutions.

To watch footage from the peace stand on 92ndand International Blvd click here.

To learn more about SAVE Oakland and the weekly peace stands, visit save-oakland.com, or facebook.com/SoldiersAgainstViolenceEverywhere. Get involved in your community!!
Author Profile