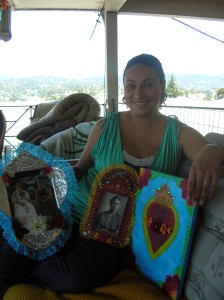 Rachel shows some of her nichos, in her home art studio near Lake Merritt
Oakland Voices/August 2012 Debora Gordon

Rachel-Anne Palacios’ grandmother was the spark that lit Rachel’s artistic fire. “I never did any kind of serious art,” she says, “but I would make things for my grandma for her birthday that were inspired by folk art from the Middle East and from Mexico, and grandma was saying ‘Every time people come over, they’re asking me, “Where did I get that?,’ and if they could buy it.’”

Even though Rachel was not completely convinced her art was anything special, she decided to pursue it.

“Art is part of my soul. Sometimes I wake up in the middle of the night because I’m thinking about this or I had a dream,” Rachel says, “and start carving at 2:00 in the morning.”

She also draws mendhi – traditional henna skin decorations common in South Asia.  She likes the ephemeral quality of henna. “It is like the cycle of life. Stuff is born and stuff dies. You can come back and get something different. Henna is natural. It’s temporary.” 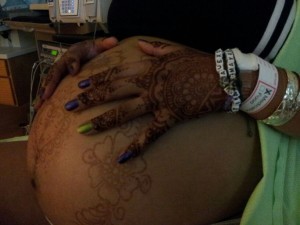 Right before her daughter was born this past summer, Rachel had henna art drawn on her hands and belly.
Photo: Josh Silver

Growing up in East Oakland, born and raised on East 21stStreet,  Rachel was drawn to the henna design she would see on her neighbors’ hands. She started teaching herself how to apply henna, making up her own designs.  Eventually, she was taken under the wing of a woman who has a Berkeley-based bridal store, who offered to promote Rachel as a henna artist, who soon found herself with new clients.

“I started going to Mexico every year, and starting look at the arts and crafts, and thought the designs were sort of similar to henna with similar designs and types of lines.  I’m also really into Frida Kahlo, and she was into crafts, such as frames and shadow boxes, and that kind of inspired me, and I started doing boxes, with pictures of Frida, or (the Hindu goddess) Lakshmi and the Virgen de Guadalupe and I would use my 3-dimensional paints and do henna designs on the frames.”

Since Rachel’s work at the Oakland Museum has a significant focus on the Day of the Dead, it has been both difficult and rewarding to work with high school kids. “They’re the most affected by what’s going on. Often they’ve lost parents, siblings, friends. In order to get through death, doing I offer them something creative to help them get through it.”

Rachel is able to share her own experience of loss through violence when she was in high school and someone she was dating was killed at a party. “It was the most traumatic experience I ever have had, having someone taken from me by violence.”

Many students have had similar experiences. Rachel shares her story with them. “I’m from Oakland, I’ve been through what you guys are going through art.”  She teaches students from all cultures how to make ofrendas – Day of the Dead altars – which has become a basis of her teaching practice, to promote a global understanding of how our culture relates to death and make it something positive and beautiful.

Rachel has been deeply influenced by many artists, particularly Frida Kahlo. “I love the passion that Frida Kahlo had in her art and life style. I feel as if I most relate to her combination of insanity and creativity.” She has also  been a dancer all her life, including  ballet, folklorico and belly dancing, traditional Aztec dancing focusing on traditional indigenous pre-Columbian dances.

Rachel loves her work as an art teacher at the Oakland Museum, but she is considering going back to school to be a labor/delivery nurse. “I want to challenge myself. I’ll still do art, I’ll never give that up. I’ve been an artist for the past 15 years, but now we have kids. My husband and I need a better income.”