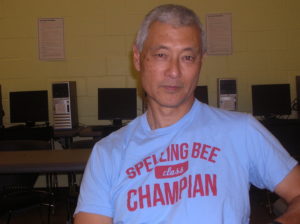 Self-described “serial entrepreneur” Boku Kodama puts a lot into his work as a teacher, but tries not to take himself too seriously. By Debora Gordon, Oakland Voices 2012.

Boku Kodama became a teacher at the age of 50. In a way, it was the latest venture in  Boku’s life as a self-described “serial entrepreneur.” His organization Urban Financial Intelligence, Responsible Entrepreneurship (Urban FIRE) targets mostly low-income adults who may have limited education. His main objective is “self-sustainability.”

In Boku’s business classes, which meet in West Oakland, students are taught that “they can do what they really want to do. That would the greatest contribution they could make.”

Before becoming a teacher in 1999, Boku was a successful entrepreneuer, which afforded him the opportunity to travel around the country and abroad.  “I had the luxury of being able  to think about how I could contribute back to my community,” Boku said.

He got some classroom experience in college, when he taught a class on “multimedia at San Francisco State. I didn’t think I was very good. I didn’t think I had good information and I was pretty critical of myself.”

Boku came back to teaching many years later. “At fifty years old, I finally said to myself, ‘I’m ready to be a teacher,’ and I really was ready.  To teach entrepreneurship, you really have to have had entrepreneurship.”

Everyone is “capable of being a world-class performer” – a point Boku stresses to his students. He built a curriculum called “The Science of Success” based on studies of great athletes, artists, and scientists. “I teach how you can maximize the information and turn it into success. These are things you can learn.”

Many of Boku’s students have gone on to create successful enterprises.  “There was a woman who took my class in 1999 and then she disappeared. She had AIDS and she had never touched a computer at the time of the class. When I saw her 4 years later, she was in remission and had her own web-development company with four employees.”

Many of his adult students face reading challenges. Boku works with a professional editor to translate class texts in short videos, PowerPoint, and other visual presentations that he uses at the beginning of each class. “I’m putting in words from experts, TED conferences, materials from the  Internet, plus my own research.  I try to make a story out of it.”

Boku is a self-trained entrepreneur.  He spent time doing independent research at a range of high-end educational institutions, including the Department of Education at UC-Berkeley. He also studied at the Highlander Center – the South’s civil rights Mecca – completing intensive training in “popular education,” which emphasizes teaching from one’s own experiences and using experiences to help one learn.

Boku would like to see a change in “the paradigm of this country’s attitudes about teachers. It’s one of the most important occupations that we can have, and how we as a society succeed is based on how students emerge from our educational system and how they contribute and come back to society.

As strong as his curriculum is, Boku feels much of his success with his students comes from his approach to the classroom.“When (students) come to class, the first thing we do is review the reading. I set the culture in the classroom on the first day of class. I present them with the research that shows that you can learn a lot more than you think you can. I’m going to set this classroom up into a sanctuary so you leave everything behind, and what you’re working on right now is yourself.”

Boku feels coming to teaching in mid-life was a good decision, one he would make again.  At 63, Boku has no plans to retire.  In addition to teaching his Urban FIRE classes at OHA, he has just recently begun working with the new Renaissance Marin Center, a non-profit small business development center in San Rafael, where students are taught the businesses of music, art and food.

Click here to learn more about Urban FIRE, and to sign up for classes at the Oakland Housing Authority at 935 Union Street in West Oakland.

If you are a teacher or know a teacher doing interesting, innovative work in Oakand classrooms, please contact me at debora.gordon@gmail.com