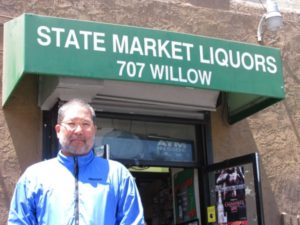 Oakland resident Ed Kikumoto has been fighting for liquor store regulation since the 1990s. By Adimu Madyun.

OAKLAND, CA – It’s been nearly two decades since Ed Kikumoto proudly accepted his role as a Home Alert block captain in West Oakland. Kikumoto was 43 years old when he and his wife moved into the neighborhood. They had lived in Oakland for a while, and the young Japanese couple was not concerned about moving into a predominantly African-American community.

“I was invited to a Home Alert meeting by my new neighbors, and shortly thereafter was elected to be the new block captain.” Kikumoto remembers. “Most of the small group were home owning seniors, and the main issues at that time were trust, drug related problems and violence.”

To gain the community’s trust, Kikumoto spent several hours every Saturday for a couple of years picking up litter on the sidewalk and the street. “My hope was that being public in this way would help with the trust issue, and it did put the so-called bad guys on notice that someone was watching.”

That work also helped Kikumoto learn a lot about his neighborhood. “I soon realized the majority of the safety problems we were seeing on our street were linked to the same problems in front of the two liquor stores around the corner from us. I spent a lot of my time as block captain working on the problems coming from the liquor stores.”

Now 60 years old, Kikumoto is executive director of Oakland’s Alcohol Policy Network, a non-profit working to reduce alcohol related risks to communities.   “It’s difficult because people aren’t aware of how Oakland got so many liquor stores,” Kikumoto said. “Not a lot of neighborhoods know how to close down a problem store.  It’s complicated and a slow political process.”

Before the mid 1960s, corner stores in Oakland were neighborhood grocery stores operated predominantly by white owners.  The stores sold food, not alcohol. They kept daytime hours, and were subject to state laws that made grocery prices uniform. This allowed corner stores to compete with large grocery chains.

Then came a mass exodus of whites from Oakland’s flatland neighborhoods, as more middle class African-Americans moved in.  Members of an African-American trade group, California Package Store and Tavern Owners, bought up a majority of the stores. The corner stores gradually switched from white to black owners around 1965.

Store deregulation came that same year, when California lifted price controls on food. The advantage went clearly to the big grocers, which could sell food at lower costs. The only way corner stores could survive was to rely on more profitable items, like tobacco, alcohol and junk food.

For some Oakland residents, the liquor store business was good. “African Americans owned a lot of the stores at that time,” Kikumoto explained. “Over the years, the owners made good money.”

The crack epidemic of the 1980’s helped turn Oakland’s liquor stores into havens for criminal activities.  “Drug dealers would set up shop in front of liquor stores,” recalled Kikumoto. “The stores provided easy access to clientele.  During that time, crack brought the drug dealer to the curb and they began serving the community. People began blaming the liquor stores for the crime and for contributing to alcohol abuse among the poor.”

Most of the African-American store owners were at retirement age. Kikumoto said that when the decision was made to sell, many of the stores changed hands to a new group. “The Yemeni-American Grocers Association (YAGA) was ready to buy.” Immigrants from Yemen could get the money through business loans created to help them adjust to life in the US. Kikumoto said that YAGA now owns more than 80 percent of the 300 liquor stores in Oakland.

For several decades, community members have complained about the high concentration of liquor stores in the city’s flatlands. Local Muslim groups began confronting Yemeni grocers in West Oakland in 2005, demanding they stop selling alcohol because it violated Islamic law. Kikumoto explained that for the new store owners, it’s all about business. “It’s a misconception that the Yeminis brought the plague of more liquor stores. Over-concentration already existed. Stores were in existence and already selling alcohol. The Yemenis didn’t do anything new.”

Due to a lack of adequate funding, Kikumoto’s APN will close down on Friday after 20 years of fighting to bring order, safety and control to Oakland’s liquor stores. “My biggest fear,” said Kikumoto about the end of APN, “is the city won’t provide a way for communities to utilize city resources to address liquor store issues. Communities need a lot of help with the enforcement process, and APN won’t be here to help them.”