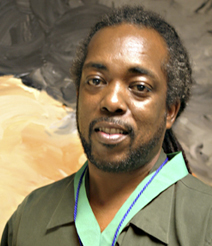 OAKLAND, CA – For most of Shawn Vasquez’s life, he’s been in trouble with the law. He started ditching school to sell drugs before he was a teenager. He hit the ninth grade and dropped out all together. Vasquez, now 35, spent almost two decades in and out of prison, including six and half years at Lompoc federal prison.

“The long stretch behind bars was especially painful to my wife and children,” Vasquez remembered. Watching his wife Tracey Mason struggle alone to take care of their four young children was a huge wake up call.

When Vasquez was released in last September, he decided he owed it to his family to do things differently. So, he finished drug rehab, and took some time to himself to plan his next moves.

What Vasquez really needed was a job. Oakland’s Young Adult Reentry Services program had his back.

When convicts get out of  prison, they face problems finding work, health care, and housing. YARS expands the quality of life for those who have been through the prison system. by teaching young people on probation or parole how to write resumes, fill out job applications, and conduct themselves during job interviews.

Isaac Taggart is Oakland’s reentry employment specialist. He works with several of the city’s reentry programs. Taggart visits prisoners throughout the Bay Area, telling them how he and other agencies can help them get their lives in order once they are released.“I continue to help to stabilize families and develop projects that allow former prisoners to be home with their children.”

With Taggart’s help, Vasquez  found a job at Healthy Oakland as a community health ambassador. In the same neighborhood where Vasquez used to sell cocaine, he now does street patrol. “If I can change, you can too,” Vasquez says to the young guys he meets, telling them about how the reentry program helped him put his life back together.

Without YARS, he explained, he and his family would not have made it. “They are my number one in life.”

The program is more than two years old,  and is funded by Measure Y – the Violence Prevention and Public Safety Act of 2004 – as well as state and federal agencies, and community foundations.

Ammie Scott is 70 years old and raising her son’s  two daughters while he serves 3 years  in federal prison for robbery.  Although she had not heard of the reentry program, Scott said,“it sounds like a good thing.”

She believes YARS would help her West Oakland community a lot, and wondered why the program isn’t more widely advertised. “My family needs this, and so do others. This kind of help would put parents back into the children’s lives.”

Taggart would like YARS to help as many families as it can, and it keeps its doors open to those who have finished YARS. The former convicts – men and women who are now going to school, working, and home with their families – can come back to support each other and new members. Some of them are even bringing in their brothers, cousins, and friends who have just been released. Taggart said that mutual support system is his way of giving some hope back to Oakland’s communities.

Click here for more info about Young Adult Reentry Services and other reentry programs in Oakland.