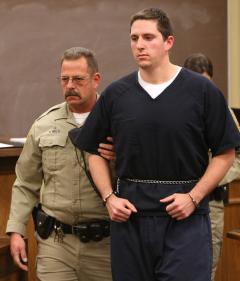 OAKLAND, CA – In some ways, commentary on the shooting of Oscar Grant seems simple, divided by one vast river of intent.  Either Johannes Mehserle meant to draw his gun and shoot Grant, or he meant to draw his Taser to tase him.  Murder in cold blood, or a grave mistake.

For the jurors, the central issue is likely far from black or white.  This case flounders in possibilities – a deep, deep well of murky middle.  Not just tasked with rendering their individual opinions, the Mehserle jury is faced with an onerous mission: reaching a consensus when their options are many.

Here is a breakdown of the jury’s choices.

Second Degree Murder
“Simply put, in order to convict Mehserle of second degree murder,” explains Loyola Law School professor Laurie Levenson, “the jury must find that the prosecution has proven that Mehserle actually realized that he might kill someone, and took the risk of doing so.” Levenson says the jurors need to be convinced “that Mehserle knew he had drawn his gun.”

Voluntary Manslaughter
One type of voluntary manslaughter is a sudden killing in the heat of passion.  The jury will consider whether Grant or others provoked Mehserle in a way that would move an average person to lose self-control under the influence of the heat of the moment.

Among the questions that go into considering voluntary manslaughter: was he provoked enough to make him respond violently, and with lethal force?  And here’s a big one: how does society expect a reasonable person in Mehserle’s shoes to have acted?

Levenson says that voluntary manslaughter also includes cases of “imperfect self-defense.” That means the defendant honestly but unreasonably feared the victim and believed he had to act in self-defense.  Were Mehserle’s actions based on a reasonable belief about his situation?

Involuntary Manslaughter
For the jury to choose involuntary manslaughter, Levenson says, it just needs to believe “that Mehserle should have know that he had drawn his gun, even if he didn’t actually realize it.”  “Acting with ‘gross negligence,’” Levenson explains, “means that the defendant made a mistake that another person in his situation would not have made.”  So even if Mehserle honestly thought he drew his Taser, the jury must find that that belief was not reasonable.

Acquittal
If Mehserle is acquitted, it will basically mean he’s been found innocent of the criminal charges against him. There are two ways that homicide can be excused: when it’s done by accident, and when there is no unlawful intent.  Homicide by public officers is justifiable when it is committed necessarily and lawfully. Riots, overcoming someone who is resisting arrest, or keeping the peace are all potential scenarios for justifiable homicide.

Mehserle could be acquitted of all criminal charges. For that to happen, the jury must find that he drew his gun purely by mistake, and that the caution he used when trying to use his Taser was ordinary given the former BART officer’s training.

Hung Jury
To reach any verdict, every one of the 12 jurors has to agree. Getting a dozen people to reach a consensus on just about anything is hard work. This is a complicated murder trial with a lot at stake. If they don’t all agree, a “hung jury” will be declared, and the case will be called a mistrial. The prosecution can send Mehserle to trial again, perhaps seeking a lesser charge.