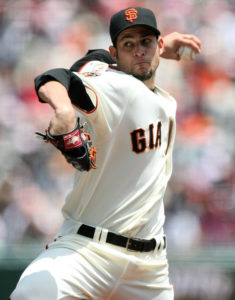 OAKLAND, CA – It is generally held that Oakland has a professional baseball team.

It is called the Oakland A’s.

Players wear green and yellow uniforms and they play ball in a Coliseum.

But if fashion statements and sports bar enthusiasm are any evidence, home-team loyalty has dropped lower than a dirt ball in the home-base clay. In a highly scientific poll of at least a dozen Oaklanders, baseball parks and making friends seem to rank well above team loyalty in our local version of America’s favorite pastime.

Tim Thomas, long-time Oakland resident, likes the San Francisco Giant’s black and orange. He says that Giants loyalty for some folks goes all the way back to before the team moved west.

“Back when the Giants and Dodgers were still in New York, fans of both teams hated anything to do with the Yankees,” said Thomas. When the teams moved west – the Dodgers to LA and Giants to San Francisco – their old common enemy was a long way off and the rivalry shifted to NorCal – SoCal.

Thomas has fond memories of the great African-American players who changed the game with their phenomenal performance wearing the orange and black.

“Jackie Robinson, Willie Mays,” he said. “I have a sentimental thing about the Giants.”

Al Auleta is a planner for the City of Oakland who “just loves baseball.” He gets real-time updates on his cell phone during meetings and records the games to watch later. Auleta loves the ballpark experience, maybe even more than any specific team.

“The Coliseum was a wonderful place to see a game,” said Aluleta. “It was symmetrical, perfectly designed for baseball.” In his opinion, the addition of the upper deck made the Coliseum too big for baseball, blocking out the sky for fans sitting down near the field. “It’s like sitting in a hole,” he said. “The Raiders ruined the Coliseum.”

The Pacific Coast Brewery in Old Oakland was packed and noisy for the first game of the World Series. John and Jared, two buddies, who won’t give last names, are elbow to elbow with a half dozen guys at the next table.

It’s the usual guy’s hang-out action: laughing, jostling and quaffing beer and nachos while the Giants closed out the game with an uncontested lead over the Rangers.

John, who lives in Glen Echo Creek, is a disgruntled fan who never forgave the league for the walk-out more than a decade ago. “I quit following baseball after the strike in ’96.”  He’s unsure about the 1996 date and no one around seems to know either (the strike ended the 1994 season before it started).

Jared transplanted from San Diego two years ago, and he uses sports as a way to connect with people socially. He followed the Padres a little down south, but doesn’t consider himself a real fan.  “I’m more interested in the camaraderie of watching the game with people,” he said. “I’m not sure I’ve ever watched a game from beginning to end.”

Melisa Cohen lives in Alameda and followed the Oakland A’s for years growing up, but attending games at Oakland’s ballpark can’t compare to the Giants experience. “The new ballpark is so beautiful. We love going over there for games.”