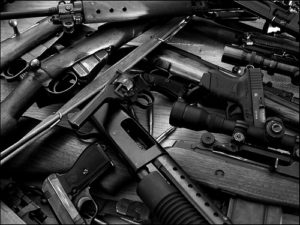 OAKLAND, CA – James Harris likes his guns. The 39-year-old West Oakland resident owns a .45 caliber pistol, a .9mm handgun and a 12-gauge Mossberg shotgun. Harris’s father was a Marine who instilled in his son an affinity to firearms.

As an avid gun collector, Harris is part of a debate that stretches from the US Supreme Court, to the streets of West Oakland. Part of the argument is over the extent to which national and local governments should regulate the possession of firearms. Another piece of the debate – one felt especially strongly in this city – is how more stringent regulations might stanch the gun violence in US cities.

For the last several years, Oakland’s annual homicide rates have reached the triple-digits.  Last year, 110 people were killed in the city, and the Oakland Police Department reports that 90 percent of those deaths were from guns. Firearm homicide is the biggest killer of young people in Alameda County. The issue of gun control policy is very much on the minds of East Bay residents.

Harris wants to be sure that any new laws don’t interfere with his right to keep guns. He says it’s a mistake to blame firearms for Oakland’s homicide problems. “Most gun owners are law abiding citizens,” he says. “Most guns used in crime are usually stolen.” Harris insists that criminals are the cause of Oakland’s murder problems, not firearms. “More guns do not equal more crime.”

Harris’s 38-year-old wife Amana agrees that guns aren’t to blame for violence. She argues that people use guns to hurt one another because “we live in a fearful society. It is the nature of our country.”

Some Oakland residents support the idea of stronger gun control laws for the city. 17-year-old Oakland resident Arianna Pharr says a gun ban in neighborhoods with high murder rates “would be a good thing.” One of Pharr’s friend’s was shot and killed in Oakland nearly a year ago, so she wants to see firearms off of the city’s streets.

But her beliefs about gun control are complicated. “People should have guns to protect themselves,” Pharr says. “They should have licenses and be able to take a class to handle a gun.” Gun collector James Harris agrees. “It’s good that people arm themselves.” For example, in the case of a home robbery, “you wouldn’t want to be at a disadvantage,” he explains.

While the gun control debates are far from decided, Harris says he will teach his 12 and 13-year-old daughters target practice with BB guns. “I don’t mind if they own guns when they’re old enough. I want them to be able to protect themselves.”