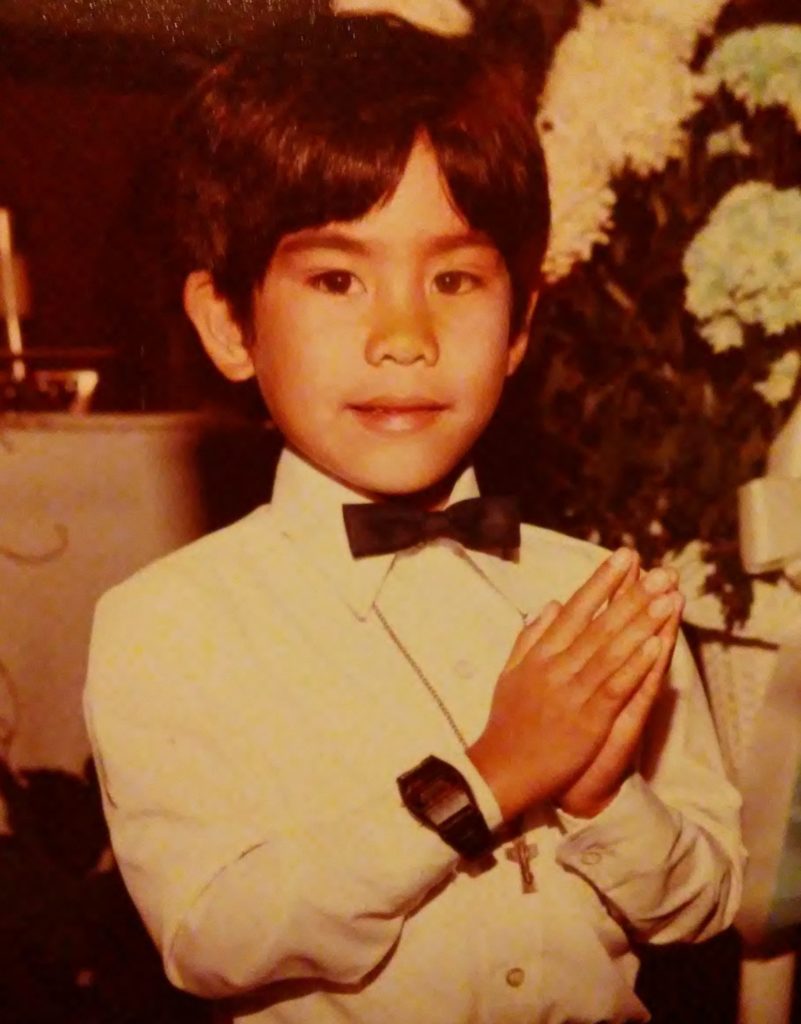 I stared deeply into his brown eyes, not because I was trying to avoid looking at the graphic carnage that had been inflicted upon the rest of his body, but because I was transfixed by the desperate look of terror etched on his face. As I stood before the original crucifix used by Spanish colonizers to coerce my ancestors into converting to Christianity, the differences between it and the less gruesome, blue-eyed versions that I had been taught to worship could not have been more stark. Hidden away in that dusty storage room in the back of the oldest church on my parents’ home island, this bloodied, brown-skinned, black-haired Jesus had clearly served more as a threat of physical violence in this life than as a promise of everlasting salvation in the next one.

I had not noticed the warehoused relic on previous trips to visit my family in the Philippines, but on that particular trip in 1996, I was a budding young journalist only one year removed from studying the subjugation of the underdeveloped world while in college. That historic church was later destroyed by an Act of God, but the gory image of that brown martyr remains with me to this day.

The Pharisees and the teachers of the Law are experts in the Law of Moses. So obey everything they teach you, but don’t do as they do. After all, they say one thing and do something else. They pile heavy burdens on people’s shoulders and won’t lift a finger to help. Everything they do is just to show off in front of others. They even make a big show of wearing Scripture verses on their foreheads and arms, and they wear big tassels for everyone to see. They love the best seats at banquets and the front seats in the meeting places.

I was raised and educated in the Catholic Church. I attended weekly mass with my family and I was an altar boy. I even played God the Father in a school play in fourth grade. Seriously.

While my parents did their best to try to save my soul, I found the entire culture of Catholicism to be too judgmental, shaming, and unnecessarily traumatizing. For the same reason that early childhood development experts preach positive reinforcement over punishment, I would have found it much easier to embrace a religion that focused more on salvation and less on damnation.

Most of my life I have tried to live in accordance with the spirit of Jesus’ teachings: I have dedicated my life to serving others; I am willing to sacrifice personally for the greater good; I strive to be humble; I have found the patience to wait for delayed gratification; I am not overly attached to physical possessions; I treat others as I would want to be treated, and; whenever anything happens, my first instinct is to feel guilty.

Why is all of that not good enough? Why should heaven only be open to those who donate to the church coffers and attend weekly mass? The poor have less to give, and if we’re going to be judged, shouldn’t we be judged by the life we lead all seven days of the week?

I can acknowledge the value of setting aside time every week for reflection and mindfulness. Bread and wine are cool too. I also have respect for symbols, rituals, and traditions, but not at the expense of self-esteem, growth, and liberation.

After eight years of conservative Irish Catholic schooling, I attended a private high school where I received a liberal Jesuit education. We studied other religions, and I was frequently encouraged to be a “man for others.” Shortly after graduation though, I learned that my AP English teacher, who had a profound influence over me throughout my high school career, had been forced to resign for committing to his male partner in a small private ceremony that none of us would have otherwise ever known about. At an elite private school where multiple priests were gay, that hypocrisy was blatant.

The year before I discovered bloody brown Jesus in the Philippines, I had started writing for a Filipino community newspaper. My second assignment as a journalist was to cover a sex scandal at a church that had resulted in the deportation of the popular Filipino priest who had discovered it. My editor refused to publish the results of my investigation since it involved a cover-up at the Diocese level. I wasn’t really mad at my editor, but my relationship with the Catholic Church was irreparably damaged.

As I learned more and more about my own Filipino heritage and history while working for that newspaper and also doing organizing work in the Fil-Am community, I learned about the difference between religion and spirituality: The Catholic Church used religion to become the largest land-owning private entity in human history, but my Filipino people have used spirituality to help them persevere through over 400 years of being shamed into giving their worldly possessions to the Vatican.

Studying different musical traditions from around the world helped me embrace a less hierarchical spirituality, but music did bring me back to church. In my mid-20s, I started playing at Baptist churches in poor neighborhoods.

Playing music on the club scene in the evenings led me to cross paths with another musician who had been raised in the Assembly of God but had chosen to get left behind with the rest of us. She was a social worker by day who happened to work in the same office as my former AP English teacher, who was then converting former military barracks into housing for the homeless. I was very proud to tell him that I had become a professional writer, and that he was the person who had inspired me to seize the day.

At the time, in addition to journalism and music, I was also working for a non-profit that provided job placement services for at-risk youth and I was helping organize a youth violence prevention conference. I was also on the board of an organization that provided college scholarships and sponsored an annual youth leadership conference. Eight years after my mentor and I had left that elitist high school under different circumstances, I felt incredibly blessed to be able to thank him in person for inspiring me to truly become a man for others.

He passed away a few years later, and I learned that he had been a prolific AIDS activist for whom San Francisco Mayor Willie Brown had dedicated an official day to honor his housing and AIDS advocacy work. Our brief but very impactful reunion had validated my choice to focus more on celebrating how Jesus had lived rather than fetishizing how Jesus had died.

I do not consider myself to be a “recovering” Catholic because I came to terms with my upbringing a long time ago and am still a very spiritual person today. I have no problem with Jesus. However, Jesus does not run the Catholic Church. Even if He did, my relationship with Him does not require my allegiance to any corrupt organization that does not practice what He preached.