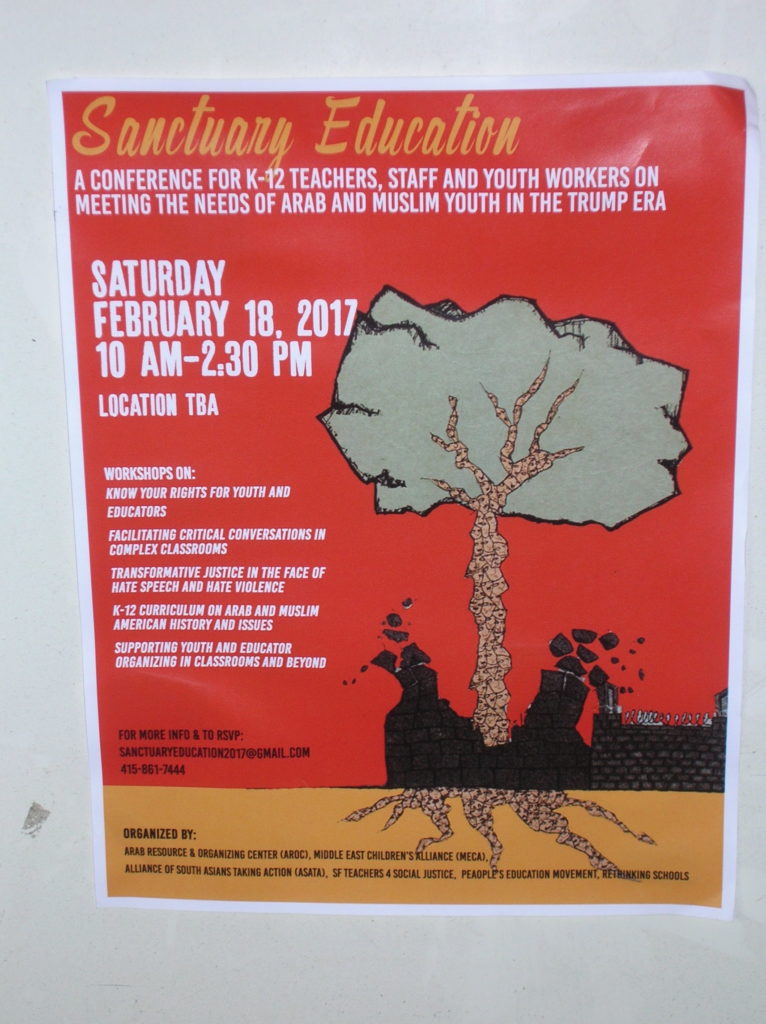 Student panelists at the Sanctuary Education Conference at the Islamic Cultural Center described feeling isolated at school, not having any Arab or Muslim teachers or curriculum that includes their history and literature, and feeling especially vulnerable now.

“It’s a really scary time; Trump is targeting all of us, instilling fear in all of us. It’s easy to turn your backs, but right now, it’s important to build solidarity. It’s time to fight,” said Rania, a 16-year old student at San Francisco’s Balboa High School whose family is from Palestine. The student panelists were only identified by their first names for their security.

The February 18 conference was organized in response to a flood of teacher requests for support in working with students who were in a state of fear and trauma after the presidential election. It was sponsored by Arab Resource & Organizing Center, the Middle East Children’s Alliance, the Alliance of South Asians Taking Action, San Francisco Teachers for Social Justice, the People’s Education Movement and Rethinking Schools.

“This is only the beginning,” said organizer Jody Sokolower, managing editor of Rethinking Schools.

In addition to the youth panel discussion, the conference offered seven workshops for teachers and other participants to learn about the experiences of Arab and Muslim youth and how to meet their needs in the era of a proposed ban on immigrants from seven predominantly Muslim countries, the specter of registries, deportations and raids by U.S. Immigration and Customs Enforcement.

Nora is a 19-year old UC Davis student, born and raised in San Francisco, and the daughter of immigrants. She said during high school, Palestine was only discussed in relation to Israel. While the San Francisco Unified School District has declared itself a sanctuary district, she said she finds the promise “empty.”

Rania told teachers that “If ICE comes to your school, we expect you guys to put your bodies on the line.”

Abdul, from Algeria, said Trump’s election has motivated people. “I want to make steps towards changing that fear. Everybody’s voice matters. These issues are empowering the community.”

Nader, a sophomore at San Francisco State University, originally from Yemen, said simply, “Please show and tell everyone that we have a place here.”
A workshop entitled “Knowing Your Rights,” led by John Viola from the National Lawyers Guild, provided information on the types of warrants (arrest, search and ICE), when one can refuse to consent to search and/or entry (a search warrant permits entry whether granted or not). He stressed the importance of teaching students their specific civil rights, including the right to education regardless of immigration status, to ask law enforcement questions such as “Am I being detained?” and to assert their rights to remain silent and have an attorney.

Other sessions included guidelines for talking to children in elementary school and secondary school about racism, sexism, Islamophobia and xenophobia, how to design curriculum on Arab and Muslim cultures and history and how to support youth organizing and resistance to racism in the classroom and beyond.

Richmond teachers Liza Gesuden and Colin Ehara said their students walked out the day after the presidential election, with little clarity and direction. Later that week, however, teachers and students put together a full-day of workshops that addressed climate change and environmental justice, knowing one’s rights regarding immigration and art as resistance. Students were encouraged to use Wyclef Jean’s “If I was President” as a model for their own poetry and essays.

Jennifer Vetter, the librarian at Emerson Elementary School in Oakland, said she wanted to be able to better work with the significant number of newcomer and immigrant students, many of whom are speakers of Arabic and Pashtun.

The conference ended with a panel discussion on “Making Sanctuary Real in Schools and Communities,” an idea which is starting to spread. In the last week, Oakland Unified School District held a briefing on immigration issues during its adult education faculty meeting, after declaring itself a Sanctuary District. And on Feb. 19, Nuestra Esperanza and Kehilla Synagogue drew a crowd of more than 100 to learn about “Accompaniment Teams,” which provide support to those arriving from Central America.