There’s so much more to Oakland

Taking a tour of my own city isn’t something I’ve done before, but something everyone should do once in their life. I’m slowly piecing together the places, the people, the history of this fascinating city as time goes on, but it became clear as the Voices tour traveled down International Boulevard that my cohorts at Oakland Voices, and their friends, families, and organizations, are the glue of this city.

My neighborhood in East Oakland had the reputation of being “dangerous.” Some friends wouldn’t even visit us at night from wealthier cities in the Bay Area. But these people saw Oakland as one monolithic culture, described by the 10:00 news as riddled with murders, car chases, and saddled with an economic anemia.

What remained invisible to those who don’t know Oakland were the vast numbers of people in Oakland’s communities who dedicate themselves to making this a place not only to survive, but a place to thrive.

I think about my neighbor, Ericka Huggins, who revolutionized what a school could be through her work with the Black Panthers. 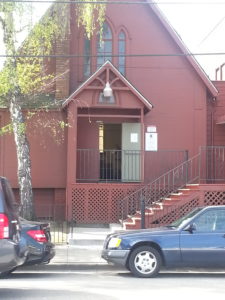 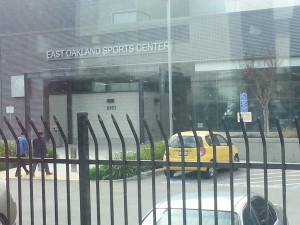 We drove by the church where the Black Panthers started their free breakfast program, St. Augustine’s.  We visited the  East Oakland Sports Center, an affordable, gorgeous community health center that sits deep in the recesses of East Oakland near the airport. We saw a diverse group of people practicing Capoeira at the Lake Merritt Farmer’s Market. There’s so much more…

And then as my cohorts at Oakland Voices passed the bus microphone back and forth while we drove down International, telling stories of the stores they went to as children, the trouble their siblings got into, and the secret restaurants, my view of Oakland got larger and smaller at the same time. Larger because I saw a bigger picture of how much this place means to people, and smaller in that I realized there is so much more I need to learn.