You, Me, Us and the Election 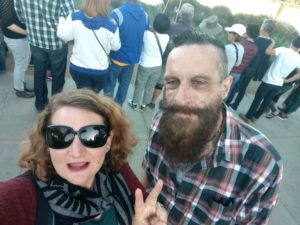 The author, Sara Rowley and her neighbor, Jon Steven Walters, who encouraged her to go to the demonstration.

If you’re like me, you’ve been slicing and dicing the presidential election results among your group of friends and neighbors, trying to figure out just what the hell happened on Tuesday. How did this TV star who lives in a golden tower in Manhattan somehow become the champion of the working class? Because it sure seems like his utterly unapologetic bigotry would be a deal-breaker.
If you’re like me, you were blindsided by the polls and the coverage by major media groups. It seemed a given that Trump would lose and that regardless of your feeling for her, Hillary Clinton would become our first female president. We would whoop out our windows with the rest of Oakland and agree over coffee that we all saw it coming from a mile off.
If you’re like me, you felt the blood drain from your face as the election results came in. Because everything we took for granted was gone and the stakes are incredibly high; namely the Supreme Court is up for grabs. As the police helicopters circled protests over downtown Oakland for three nights in a row, you may have felt like the world caught on fire.
Maybe you’re not like me. If you live in Oakland it’s likely that you have a different skin color or sexual orientation or religious affiliation than I do. Maybe you stayed off social media, straightened your back, and looked at the world with clear eyes and fight in your heart. I don’t know, but I hope that’s what you did, because I drank too much and trolled people on Twitter and that’s not a good look.
So because Oakland is a group of communities and not just one community (as my neighbor and eminent political thinker Ericka Huggins once admonished), we began to bicker with each other. Any real community does. We draw lines and point fingers: by Wednesday morning after the election I got into a fight with an aquaintance on Facebook and distant relatives started to share biting opinion pieces.
You may have had enough of it all as the week wore on. The blessing and curse of technology today is that we can engage with anyone, anywhere. We can convince ourselves of whatever we want, argue with those who don’t agree. It’s easy to quip at someone if you’re not looking them in the face.
So if you’re like me, by Sunday you were exhausted from it all. Luckily there was a place to go. A humble Facebook post started by resident Allison White asked for help organizing a peaceful resistance to Trump’s victory by means of joining hands around Lake Merritt. When I checked the “interested” count on the invitation on Friday, it was at about 400. By Sunday, an estimated 7,000 showed up- probably more.
If you’re like me, maybe you wanted to pass on the event. I sure didn’t feel like singing Kumbaya; I felt like crawling into bed. But my neighbor sent me a text: “Come. Everyone with hands is going to be there.”

By the time we arrived, the crowd was shoulder to shoulder two to three deep in most places. On that cool sunny afternoon, Oaklanders were actually talking face to face, actually looking at each other, smiling at each other. It turns out that the virtual city is not the actual city.
It’s impossible to describe how these mental knots get loosened until they are untied. I suppose I was wrapped up in who lost the election and why, and I didn’t think about all the good people who have fought and are still fighting for the right things. In many different ways, we all want the same opportunity: the freedom to live our lives without fear that that freedom might be taken away. It was so simple, but so profound.
Maybe you are like me, maybe you’re not. I hope you see good people who lift you up every day. I hope you are pulling yourself out of mourning with gusto, or that you never felt sad or afraid at all. I hope you get a chance to look around and feel safe and that your neighbors have your back.

But I know you, Oakland, are made of tough stuff and you have a big heart. I saw it on Sunday; it’s there forever. No president can change that.