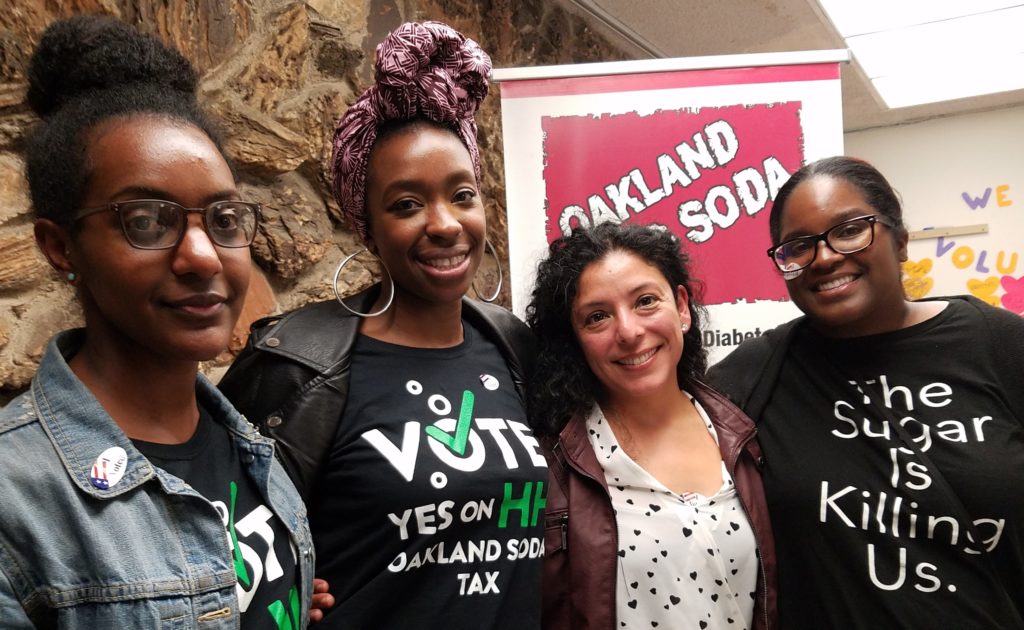 Election Night and the happiest place in Oakland was the headquarters for Measure HH. Everyone was talking about the estimated $24 million that the beverage industry spent to fight measures in San Francisco and Oakland.
““They began in Oakland in June with a very effective message, but a blatant lie,”  said Sally McCaffrey, communications co-chair of Measure HH.

This sentiment was echoed by Roger Saechao, a recent University of California Davis graduate who joined the Measure HH campaign as a fellow with The Organizing Leadership Academy (TOLA).  For months, Roger and his cohort of TOLA Fellows worked 12- hour days, six days a week, planning, mobilizing, phoning, and canvassing.

“Such a big fight it was for us,” he said. “There was so much misleading and false propaganda.”

Measure HH imposes a tax on sugary drinks — distributors will pay one penny per ounce. The tax revenue will go toward health, nutrition education, parks and recreation.

Saechao, an Oakland native, said he came home with a purpose -“ to improve my organizing skills to be able to reach out to residents to educate them about important issues that affect the community.  The epidemic of diabetes among children, very young children is very hurtful to me.  I had to do something to resist this in my community.”

Election night 8 p.m., a steady stream of people joined those already in the Measure HH headquarters. The unseasonably warm evening added to the friendly spirit that we community correspondents encountered – “Welcome, food in the room to the left.”

Small groups of people were scattered throughout the main room smiling, taking pictures, eating, laughing and generally in a celebratory mood. Several tables were loaded with sample products next to tablespoons illustrating the amount of sugar contained.  And of course the traditional signs of a campaign –wall charts with volunteer schedules and slots to sign-up and thermometers measuring goal achievement.

The big screen tuned into Alameda County Election Results— HH leading at 61% to 30%. 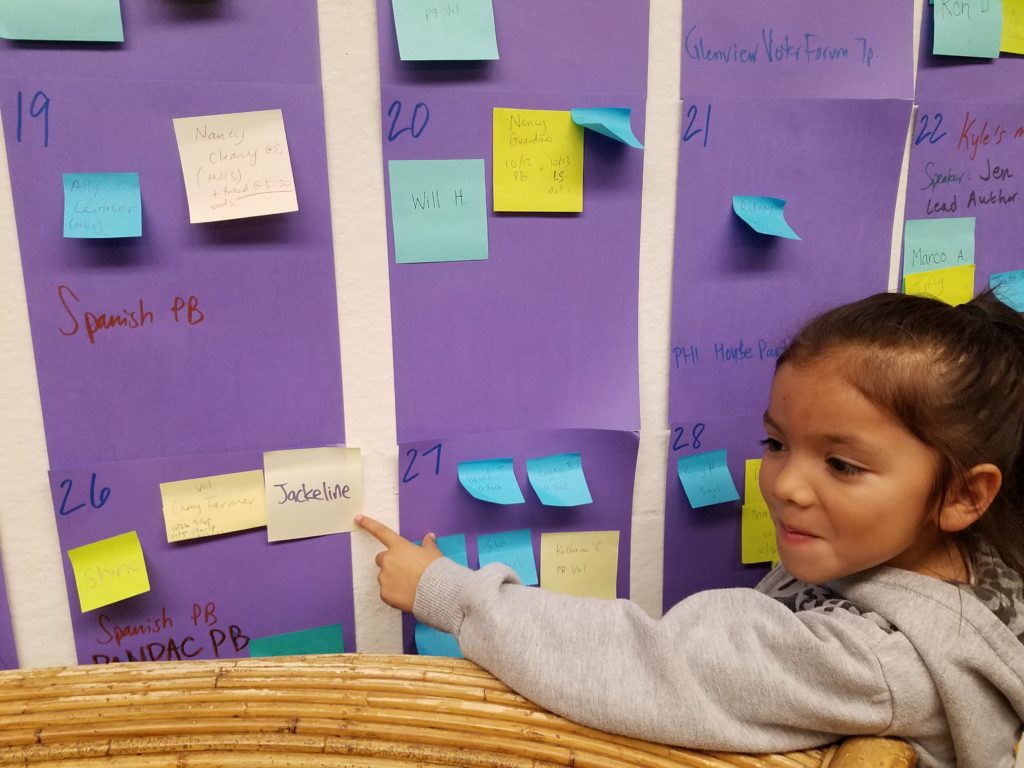 8:30 p.m., three generations of one family entered the campaign headquarters.  They became involved when mother and daughter, both home health care workers, disagreed on this measure. Daughter Jaqueline Bermudez felt the measure was another tax and she was not interested.    Mother Maria Luisa Figueroa, a social justice advocate and active member of SEIU who worked on a number of campaigns this election cycle, gave her daughter more information. 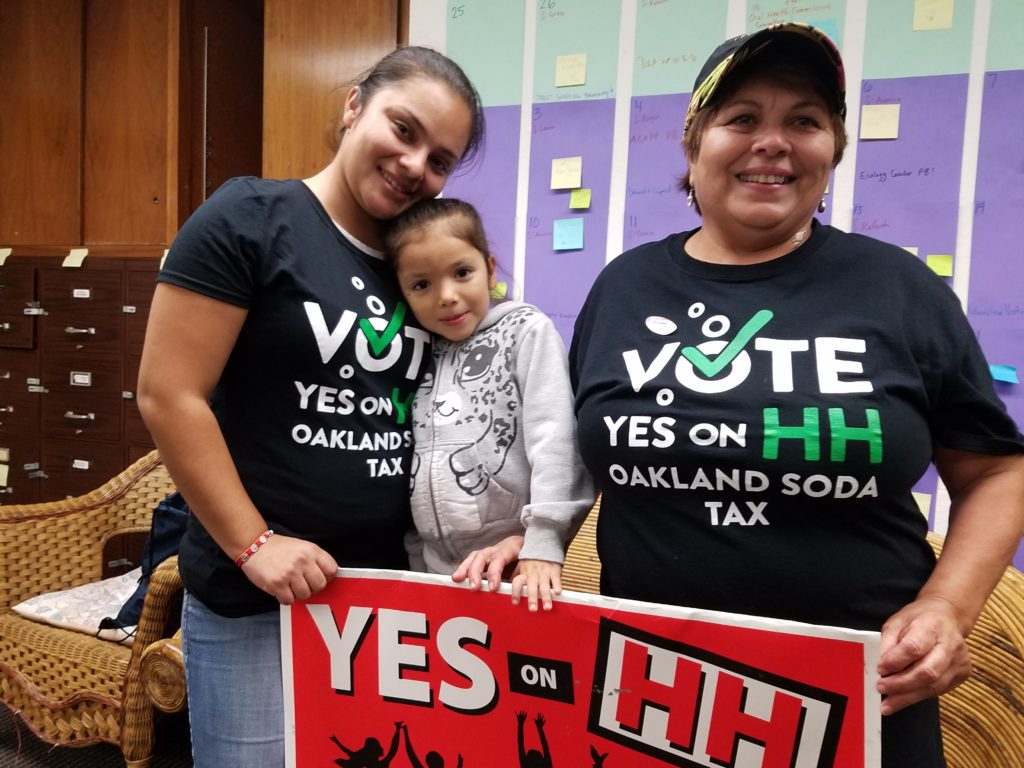 “Soda is a danger for our kids and our community,” she said. “The horrible effect of sugar on the teeth of our children and their health must be stopped.”  The mother’s passion and background knowledge moved the daughter into action. Bermudez felt compelled to volunteer.

“I wanted to protect our children from diabetes,” she said. “Anything we can do to limit or stop big soda is a step in the right direction.” Six- year- old Itzel Perez, Bermudez’ daughter,  recognized and showed me her mother’s name posted on the volunteer wall.

The general theme of the evening’s speeches was that Measure HH proves that people can make a difference and begin to take back their communities. 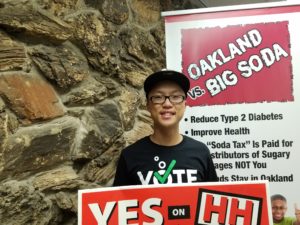 “People all over the world are looking at the devastation caused by diseases that can be avoided and watching to see what happens in Oakland, ” said Larry Tramutola,  campaign strategist.

Diane Woloshin, chairperson of the Coalition for Healthy Oakland Children, and the former director of nutrition services for Alameda County, joined Measure HH  in 2014 because it was about food justice and advocacy.

“This is smart public health policy and we want it for Oakland,”  she said.

Measure HH captured the energy of more than 150 organizations dedicated to improving health outcomes for children.  Oakland Vice- Mayor Annie Campbell Washington introduced the measure to the Oakland City Council.  “I’m excited that resources could be available to address neighborhoods of focus in East, West and Central Oakland due to the disproportion rates of disease related to sugar consumption,” Campbell Washington said.

Tonya Love,  community engagement volunteer for the American Diabetes Association, believes that local public policy is the key for making an impact in the community. She said sees Measure HH as an avenue to provide children of Oakland “healthy eating and active living opportunities,” that she was not afforded growing up, in order to prevent chronic diseases.

“Measure HH is a concrete way to battle diabetes among youth,” said Alem Tecle, a Measure HH staff member, summing up the attitude of many supporters in the room.  “It is working in Berkeley and we now have it in Oakland.”

Twenty-four million dollars and Oakland defeats Big Soda is not just a slogan.