Sights and Sounds: An Artist Paints in Athol Park – A Radio Story 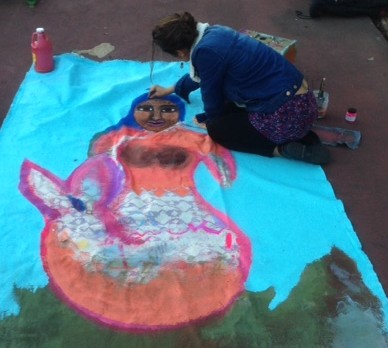 Two tennis courts, enclosed by a chain link fence, sit adjacent to Athol Plaza Park in Oakland, near Lake Merritt. Laila Espinoza is here nearly every weekend. She hangs a canvas on the tennis court fence so passersby can catch a glimpse of her painting. Today, it’s the image of Our Lady Of Guadalupe in the form of a mermaid; a painting she created on this tennis court.

“It really is about creating a presence and a space, keeping a commitment, and whoever comes through in the process of that, that’s great!” she says.

Espinoza comes to the park for many reasons, one of them being that there’s much more space to create. She actually lives up the street from here with her five-year-old son. The two of them moved to this area after being displaced from their former neighborhood, near Highland Hospital.

“When the landlord sold the house, we moved to a tiny little apartment over here. We don’t have space to do much. It’s tiny but the rent is more expensive. So now we’re here!” she laughs. Espinoza laughs because she knows that there are many other things that keep her spirits up, like making art in the park and the idea that this work can bring people together.

Park visitor Sherrell Boyd stops to point out a mermaid in Espinoza’s painting. 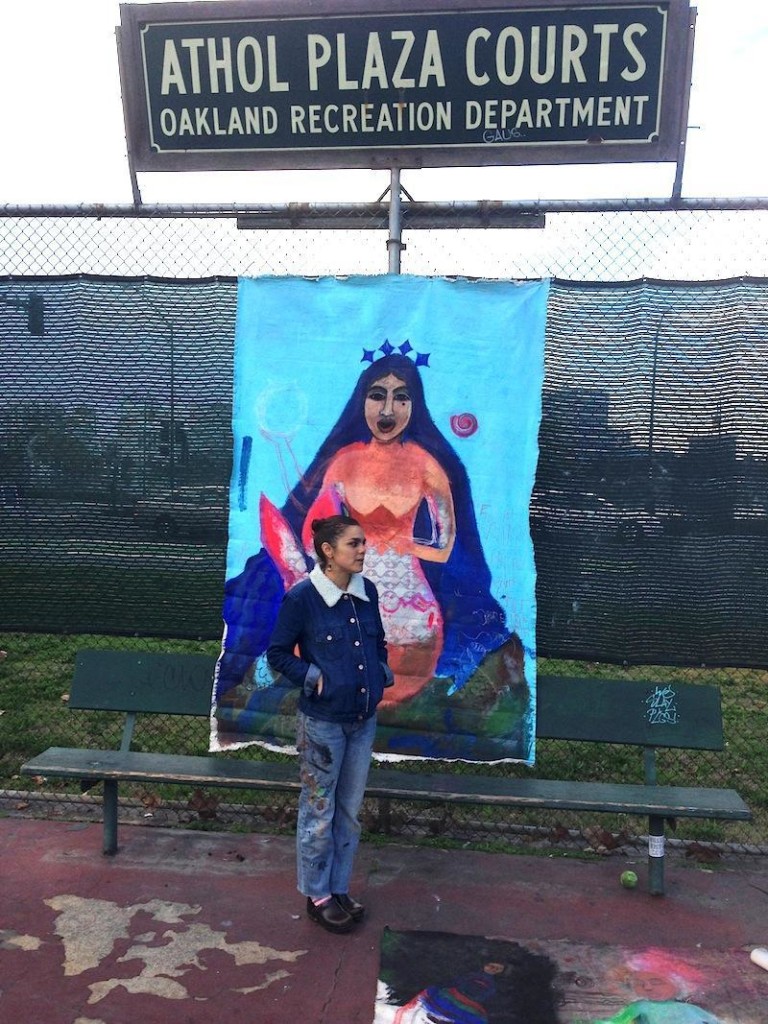 Espinoza with her mermaid

Espinoza points out the details.

“That’s so beautiful and so colorful and it’s so alive,” Boyd smiles, “I love your work!”

These interactions are what keep Espinoza inspired. She wants to help park users realize that these spaces truly do belong to the public.

Every Sunday when Espinoza comes to the park, she uses plastic gloves to pick up liquor bottles and trash along the courts before setting up her outdoor gallery. She realizes that this area of Oakland has a reputation for violence, but she says, “There’s really no danger. The danger is when we don’t know each other, when we isolate ourselves and we don’t talk to each other and we don’t recognize each other.”

Once the area is cleaned up, Espinoza lays out canvases inside the tennis court. One canvas serves as an invitation for park users to join in.

“I think that’s the key,” she says, “We’re living in times when if you feel like you want to do something that’s positive, creative, constructive; something that brings peace, this is the perfect time to do it, because at this point, anything as simple as it is, is going to beneficial because we’re in a desperate situation right now. Any little simple gesture has huge effect, huge impact.”

Today, no one joins in to paint, which is Espinoza’s ultimate goal. But for now, even if people just observe, she feels she’s doing something right. Like when passerby David Ford stops to have a closer look at her painting, and then notices the flowers in the park.

It’s this kind of beauty that Espinoza hopes to capture, or at least encourage people to be more aware of.

When night falls at Athol Plaza, the sound of Brazilian music fills the park. It’s another artist who comes here to feel inspired by the outdoors.

Laila Espinoza sits cross-legged, leaning forward, painting until she turns off the lights on the tennis courts and returns next Sunday.

This story is part of KALW’s Sights & Sounds arts project and was produced in collaboration with Oakland Voices, a community journalism training program run in partnership with the Oakland Tribune and Maynard Institute for Journalism Education. Thanks to the California Arts Council and the California Endowment.