I was motioned into the sanctuary by a large, smiling man in a dark blue suit with one hand, as he held the door open with the other. As I stepped inside, a grey- haired woman in the back pew was swaying; her eyes were closed and she groaned while Teresa Smith described the gruesome death of her son, Caesar Ray Cruz, with great detail. One by one, mothers who have lost their children rose to speak and remind us of the things they cannot forget.

If you want to hear the truth, let the suffering speak-Cornel West

Saturday, Feb. 27th, The Oscar Grant Foundation (OGF) partnered with the Love Not Blood Campaign (LNBC) and held an event at the First AME Church on Telegraph Ave. in Oakland, “Policing in the 21st Century: Where do we go from here?”  Both OGF and LNBC were founded by Cephus “Uncle Bobby” Johnson, the uncle of Oscar Grant: Johnson hosted the event, joined by his sister and mother of Oscar Grant, Wanda Johnson, and  his wife Beatrice “Auntie B” Johnson. 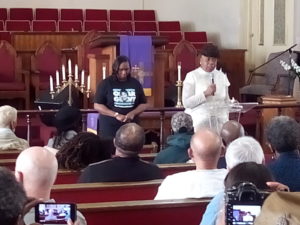 ins sat among the mothers in the front pew.

There were tears, hugs, words of wisdom and encouragement pouring out over  the community seated in the church.

“I am about to explode, but I am also about to ignite,” she said. Reed and other mothers expressed their exasperation when dealing with judges, district attorneys and the department of justice when trying to get justice for their family members.

Samir Rice, mother of Tamir Rice, and Jeralyn Blueford, mother of Alan Blueford, shared the horror of discovering that some police officers are being ‘recycled,’ as Rice put it.

Blueford said the officer who shot and killed her son, Miguel Masso, had a history of violent misconduct. Masso worked at the NYPD in 2007 when he and three other officers were accused of beating, macing, and tassering a man in his holding cell at the 52nd Precinct station in the Bronx. After beating him, Masso allegedly refused his requests for medical attention.

After being transferred to OPD, Masso shot and killed Alan Blueford in East Oakland in 2012. Initial reports indicated a gun battle. But later reports clarified that Blueford never fired a round and that Masso shot Blueford three times. Now Masso works as a police officer in the city of Hollister, CA. Most of the families had similar stories.

Along with the testimony of mothers of victims, there was a panel discussion with the fathers as well. Journalist, syndicated talk show host and hip-hop historian, Davey D was the moderator. Fathers spoke out about their pain and grief. Panelists said men often don’t have the opportunity to be vulnerable and talk about their feelings and that is needed, especially in instances such as these.

Michael Brown Sr. spoke at length about his son and the problems family and friends had trying to claim his son’s body. The panel discussion quickly turned into a chance to share their feelings; some of the fathers shared that they had yet to grieve for their children. I can only assume it would be extremely difficult to grieve for your child when you are still fighting to get justice for their death.

As far as where to go next, the families talked about the importance of enacting case laws or precedents to set standards for future cases of police violence. 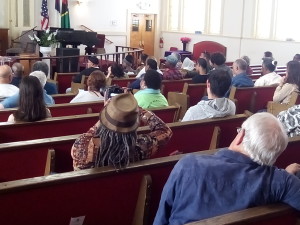 So, as far as policing in the 21st century, it has to be changed. Families of police victims are calling for the change and are asking for communities to stand behind them.

I over heard a woman in the crowd say, “I don’t really know where we goin’ from here, but what I do know is we goin’ together.”