The message at a town hall meeting about Coliseum City was loud and clear – East Oakland residents don’t want a development that ignores their needs and is designed for people who don’t live there.

Nearly 200 people packed into Union Baptist church in the middle of Coliseum City Saturday for a town hall meeting to discuss the future of the 800-acre area that surrounds the Coliseum and Oracle Arena. As the City of Oakland and Alameda County put together the Coliseum City Specific Plan, some people and organizations are speaking up about what they would like to see for their community in the near future.
Esther Goolsby, the mistress of ceremonies, opened with a powerful speech. “We don’t want another development that’s a new city within our city that’s not for us: with luxury housing, high end shops, jobs that aren’t for us, poor air quality, and no affordable transit,” she said. “The area has been disinvested in for years and years, leaving it blighted, and then [they say] that we don’t care about it.”

She encouraged residents to be leaders, not followers, when it comes to communicating with City Hall about the needs of the community.

Several people said they hadn’t heard about the workshops about Coliseum City that were hosted by the city of Oakland, and they felt the votes on the development plan were made behind closed doors. As a result, Oakland United –an umbrella organization working with labor unions, environmental health groups such as Communities Better Environment, and the political action coalition, Causa Justa: Just Cause– mobilized to host the town hall meeting so residents could “come to the table” and be heard.

“Oakland is in a development boom right now, and we feel vulnerable. Black folks are getting displaced,” said Jahmese Myres, an event organizer. She said the rising cost of living, that will only increase with large-scale development, is a source of stress on local residents. “We want our community to remain the community we’ve invested in for decades.” she said.

The town hall offered several opportunities for people to express their points of view. There was a station to conduct video interviews and a table where people could write their thoughts and ideas on note cards. In the main event, everyone split off into 14 groups to do visualization exercises for what they would like to see happen in Coliseum City. 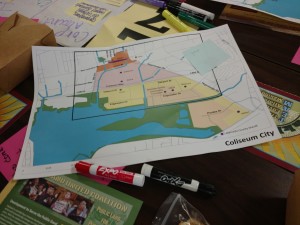 The first question asked was: “What do you see in our community that you love? What are the strengths that we can build on?” Some people cited churches, some cited the diversity of the area. But there was also some hesitation, as urban blight, homelessness, and neglected infrastructure were part of the conversation.

E Riller worried that she wouldn’t be able to get her car out that day because the sewer drains had backed up so much from the heavy rain. “That’s an example of something the city can fix. They have the money, just not the wherewithal,” she said.

The second question was: “What needs to happen, and what could the policies be that would implement change?”

The ideas came out in a torrent: walkable streets, accessible pathways. Access to transportation. Child care centers. Affordable and accessible transportation. People said police accountability in the area feels uneven and poorly managed and needs to be improved. Nobody seemed interested in high-end condos or boutique shops. Donna Griggs Murphy, a long-time resident of the area, suggested a worker-owned grocery co-op and a vocational training facility.

Last and most importantly, the groups were asked what kinds of policy measures the city could implement to serve the community’s needs. Everyone agreed: Coliseum City should be reflective of the community it exists in.

Local businesses could be given priority to rent space in new developments. Stadiums and other structures could be built with union labor, providing job stability for the workers. Some residents would like to see at least 50 percent of the workforce come from Oakland.   These residents said the decision makers and developers need to be aware of a number of concerns to make Coliseum City viable and healthy for all residents, ranging from environmental and economic health, to more basic services, such as clean streets.