When the Holidays Aren’t So Merry

As Americans, we typically associate the holiday season as a time of merriment and generosity. Shopping for gifts for loved ones and friends, holiday parties, music and dance festivals, religious gatherings and donations of time and money are generally hallmarks of the season.

However, the joyful undercurrent of the season takes an entirely different form if one has suffered the loss of a family member or friend through gun violence. Light and excitement surrender to darkness and numbing sadness. 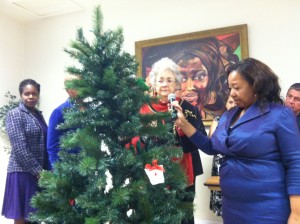 This is the reality that Lorrain Taylor, founder of 1000 Mothers to Prevent Violence, has tried to address for eight years. Taylor, who lost twin sons to gun violence, organizes an annual evening to unite families who suffered the loss of a child or adult family member at the hands of gun-toting perpetrators. Their lives shattered by murder, the stunning loss of a loved one, the voice heard no more and the empty seat at the table are the realities surviving victims must face each day.

The 8th annual PURPLE Gala was held December 11th at St. Colomba Catholic Church in Oakland. PURPLE is not simply Taylor’s color preference. Rather it is an acronym meaning Prayer, Unity, Restoration, Peace, Love and Empowerment.
In that spirit, nearly 200 people gathered for an evening of prayer, food, conversation, muted celebration, encouragement and remembrance.

Paradoxically, the shattering effect of gun violence produced an odd synchronicity in Oakland where people who are often portrayed as adversaries found common ground sharing quiet conversation. Oakland’s Chief of Police Sean Whent and five police investigators, gun violence victims and clergy came together on a quiet, cold, winter evening to offer consolation and hope that a better day for all might come soon. Taylor, who presided at the evening’s event, recalled that when Whent was first named as chief he promised her “he would do everything he could to stop the violence.” He has lined up as one of the big supporters of Oakland Ceasefire.

The PURPLE Gala recognizes a Survivor of the Year. The designee for 2015 was Tomeka Rothschild whose son Derrick and his friend Dinyal Newson were gunned down in an ambush in West Oakland while they sat in a car. Rothschild recalled the “confusion, anger” and uncertainty she experienced when she learned of their deaths. She said she has found comfort and support with Taylor and the Oakland Police Department investigators who have worked tirelessly to identify and arrest the murderer of her son and his friend. Rothschild, who is African-American. urged the audience to stop teaching children “bad news about the police” but to show them “that they are there to help.”

To confirm this sentiment, at each year’s PURPLE Gala, an Officer of the Year is selected. This year’s choice was Sgt. Robert Rosin who comes from a law enforcement family. He said he and his fellow investigators want to “solve all the cases” that are brought to them. Finding and arresting gun violence perpetrators, he said, gives “great joy to all of the surviving victims.” “Police come to support us and listen to our stories,” Taylor said.

The city’s clergy are among the first line responders to gun violence. Members of Oakland’s Catholic, Protestant and Jewish clergy attended the dinner. Elder Virgil Childs, Senior Pastor at Market Seventh Day Adventist Church, was awarded Clergy Member of the Year for offering space in his church for grieving parents to meet. Childs said the church needs to see itself “not as a cruise ship but as a battleship that is aware, available and accountable” to the multiple needs the faith community may have. In the case of surviving family members, he said, “the pain hangs on when there is no one there but you, the victims.”

Volunteers play a significant role in Taylor’s program. Rich Laufenberg was notable this past year. He creates and distributes crosses for each homicide in Oakland that are part of a larger public display outside St. Colomba’s Church. “The crosses reflect the magnitude of the overall problem of violence in the streets of Oakland,” Laufenberg said. 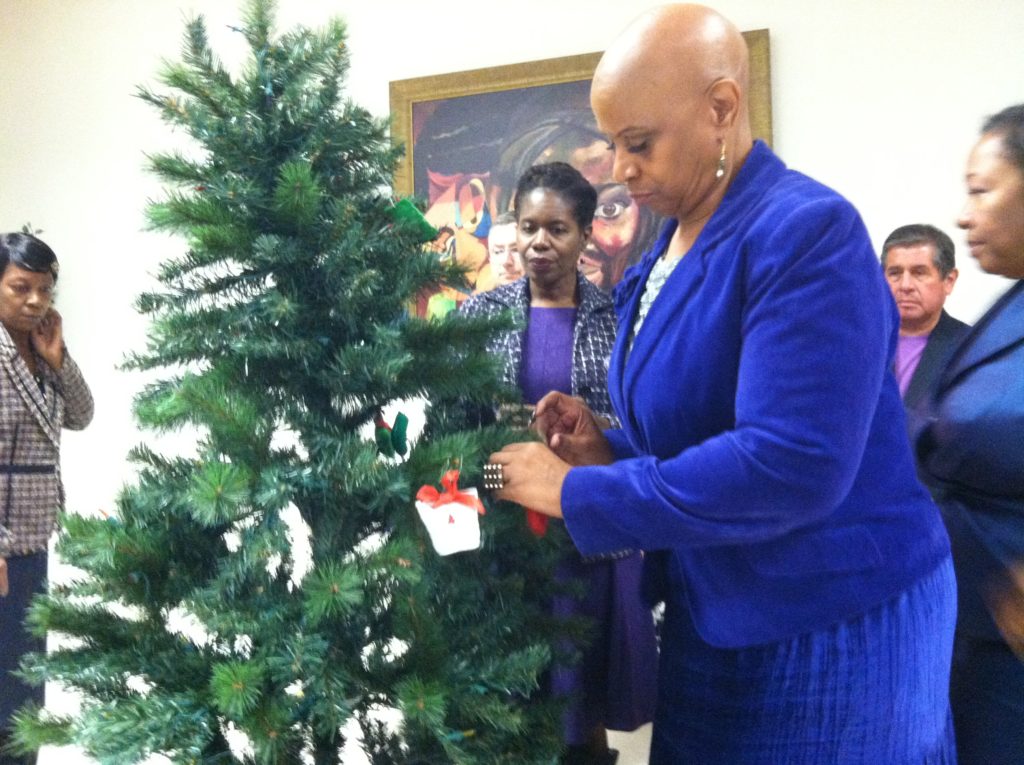 In the Ceremony of Remembrance, a woman places an ornament on the Christmas tree to remember a loved one lost to gun violence

The evening concluded with a touching Ceremony of Remembrance. Guests who had lost loved ones to gun violence were invited to hang an ornament on the Christmas tree in memory of their sons, daughters, spouses or relatives. More than 20 people, some who hailed from as far away as Sacramento and Riverside County, lined up. They tearfully recalled the lives of those gunned down in the past months, years and decades.
In addition to the emotional and spiritual support of the PURPLE Gala, families received gifts, including boxes of food, coats and bicycles provided by various supporters of 1000 Mothers to Prevent Violence.