A bicycle-powered blender. A hooked rug wolf portrait that lights up and maybe howls. A squirrel that registers the noise level in a classroom. These are a few of the creations invented by Oakland Unified School District (OUSD) teachers who participated in the Maker Fellows program. What’s in your imagination?

On the first day, Program Coordinator Parker Thomas asked teachers to share something they had “made” in their personal or professional lives. The list ranged from bookcases to novels, but Claudia Goodman-Hough, the artist-in-residence at Redwood Heights Elementary School, raised the bar when she said she had made an actual boat. Thomas raised it a notch higher when he said that he had made an airplane and gotten into and flown it.

Comparatively, the things I have made in my life, as a teacher, writer and artist, are simple, non-vehicular objects, like drawings and stories and dinner, but the Maker Movement ultimately validates all forms of “making.” It’s a rising trend in which “Makers” create anything from re-imagined schools to computer programs to 3D-printed just-about-anything. And it is happening everywhere. Including in the Oakland Unified School District.

Thomas said the objective is to provide opportunities for teachers to create spaces and making activities in their classrooms and to explore with students, the question “What does it mean to have a “Maker Mindset?”

Wang talked to Thomas at the Maker Education Conference and to Aaron Vanderwerff, a Maker teacher at LCCS. “We crafted an 8-day journey, and we reached out to teachers to see if they wanted to commit to it,” she said. They did, and OUSD Maker Fellows was born.

The dozen teachers in the program, from across the school district, had six meetings in the Makerspace at LCCS to both learn about and participate in the Maker model, beginning with Agency by Design’s “Thinking Routines.” We were instructed to examine the tables where we were sitting and consider each table for its effectiveness, efficiency, ethics and beauty. These were open-ended questions that fit in with the district’s focus on academic conversation.

We worked in small groups to create our own tables out of wood. After receiving instruction in operating tools, everyone was asked to handle power tools, regardless of prior experience or level of anxiety, for example, with the powerful but potentially deadly chop saw. After considering the given criteria, our group created a butterfly-shaped table.

We went on field trips to see Makerspaces in local schools, such as Wood Middle School in Alameda, and Brightworks, an independent school in San Francisco. We, met with staff members at Autodesk, Uber and Clever to learn about their design processes and what they are looking for in the 21st century employee. Uber – “Always be on the hustle; ” Clever – “Challenge your assumptions” and “do the extra credit.”

We also experimented with technology to create our own simple robots with moving parts and LEDs, using simple computer programs.

So what did we make? Paula Mitchell, who teaches at Grass Valley Elementary School, described her project as a “design adventure” that considered ways to create automata (a mechanism that moves an attached object) with second and third graders. “I learned a lot from this first prototype,” she said. “I learned it is not as simple as it looks. My final iteration took hours of work, but was very satisfying.”

Nancy Fisher, a kindergarten teacher at Redwood Heights Elementary School, had the most unusual idea. With some help from her carpenter husband, she designed a “blender-bicycle.” She had to find the right bike, the right blender and then fit them together. There were a series of attempts that didn’t quite work, but eventually she created her bicycle-powered blender. “Perseverance pays off.,” she said. “Critical thinking skills can be as valuable as experience; I also learned about tools and a lot about patience.”

Eric Pirmann, a VISTA Maker at La Escuelita Elementary School, designed a hooked rug wolf portrait that would light up in response to cues from a software program. He focused on learning to use the tool, a latch hook in this case, deciding whether the wolf could howl and figuring out how to integrate his expertise in coding with learning the new skills of textiles. His takeaway: “Measure first is not just for woodworking.” 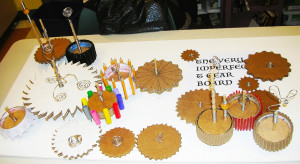 Claudia Goodman-Hough, the artist-in-residence at Redwood Heights Elementary School, who had already made a boat, chose to make a Rube Goldberg-style gear machine with mostly cardboard and caps from dried up markers.

My creation was a 3D-pen printed butterfly with wings that, uh, didn’t quite flap as gracefully as I’d hoped.

Linda Rogers, a first grade teacher at Redwood Heights Elementary School said she is beginning to create a Maker Space in her classroom. “I’m mostly interested in the type of thinking that needs to happen in order for kids to create.“ She made “Sammy the Squirrel” that wags his tail and lights up in response to the noise level in the classroom. “I didn’t know the magnitude of the project,” Rogers said. “Parker gave me the confidence to do this. It’s like this whole new world opened up to me that I didn’t even know existed.”

Wang and Thomas said they hope to continue the Maker Fellows Program, originally funded by the Rogers Family Foundation in partnership with the district, in coming school years. There is definitely a movement to incorporate Makerspaces into all schools in response to changing technology and emerging needs of student populations.