Recently, two Oakland Voices writers – Debora Gordon and Michael Holland – offered very different views on whether owning guns is a bad idea for Oakland and people in general, or just common sense preparedness for life in a tough town. But it didn’t stop there. They read each other’s piece, and replied. 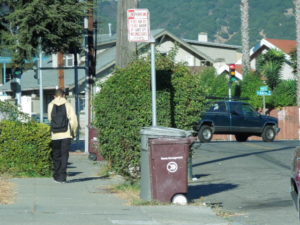 As the Ides of October came and went and everyone began thinking even more about Election 2012, all I’m thinking about is Protection 2012.

As rational adults we have to take our safety very seriously. We can’t ignore what’s going on outside our doors. If you live in The Town, you have probably at least heard about the crime that has been well documented by the Tribune and other news media. If you have not witnessed the crime or its unmistakeable aftermath, just wait. You will. Never before has there been more of a need to arm ourselves than now.

My Oakland Voices colleague wrote a piece citing reasons why society should be gun-free. Although I agreed with some of the points presented, I strongly disagree with the thought of disarming US citizens. The right to protect life, liberty, and property is non-negotiable.

Both presidential candidates have expressed support for the core right to bear arms. A bi-partisan agreement speaks to the fact that Americans would much rather point a gun at an intruder than a house cat. Meow!

Home invasions, armed robberies and senseless shootings are a constant in the news. Knowing that, we as adults must do our part to curb crime. At least in our homes. I do not approve of  open carry. Guns in public would undoubtedly lead to even more senseless killings. But in your homes, you should feel safe, which comes from knowing that you and your family are protected.

As a convicted felon, I am not allowed to have guns in my place. But not only do I support everyone else’s right to have at least one gun in the home, I strongly encourage it.

Too many of us delegate the task of keeping our homes safe to the police. After all, that’s their job. But OPD cannot be everywhere at all times. Thus leaving citizens to defend their own. If all the would-be robbers knew that each house on the block had at least 6 rounds to dump back at them, they would probably reconsider running up in your house. Home invasions might decrease.

Forbes recently listed Oakland as the 3rd most dangerous city in America, based on FBI crime statistics. Just before that story ran, Oakland reached a sad milestone: our 100th homicide. When I learned of that shooting on Hilton Street – less than a mile from my house – I had to go look at the scene because I’ve always thought of that street as being quiet.

When I reached the scene 8 hours later, there were no markings of murder – no police tape, investigators, or memorial. I gathered that no one had time to leave candles or photos on the curb for yet another senseless killing. Or maybe no one cared. I spoke with a young man named Issac at the corner of 57th and Hilton as he walked home from school. “The green and white house near the corner has had a lot of police coming by lately,” he told me. I thought to myself, “Not enough cops came, obviously.”

KTVU reported last week that Oakland leads the nation in violent robberies. Knowing that, we as parents and people should arm ourselves.

I wish we could magically make all of the bad guys’ guns vanish. But since we can’t, I say to all of you – arm up!

I applaud all the people marching in Oakland trying to “Stop The Violence.” Good Luck with that! I have a saying. “You can march and protest, ’til your blue in the face. You’ll all turn into Smurfs with the time that you waste!”

Links in this series: