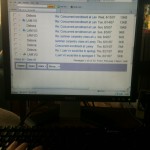 Lam and I corresponded via email about his options during the summer of 2007 Photo: Debora Gordon, Oakland Voices 2012

I responded to the email Lam sent from Juvenile Hall within an hour of receiving it. That was more than 5 years ago, so I am trying to look back and remember what I was feeling and thinking about him back then.

I was very moved that he was reaching out to me, the clichéd “cry for help” that so often is overlooked or not responded to by those of us who should be the caretakers and guardians of youth.   I also had liked him as a student. In the classroom, I did not pick up on any clues that he was on a collision course with disaster. Then his mother came to see me at school, repeating “Lam, jail,” and that raised my consciousness.

Something I barely noted at the time, but leaps off the screen today, was his email name – lam300eso. Eso is a reference to “East Side Oakland,” and signals gang involvement.  I now wonder why it escaped my notice then.

Back in June 2007, I still didn’t know the details that led to his arrest and detention at Juvenile Hall. I believed that he was a good kid who had made a single bad choice. And from that naïve and uninformed perspective, I replied to him with this rather prosaic but predictable response:

Thank you for writing.  I appreciate your taking the time to do so.  I was able to learn from your mother that you were in detention, so I was not completely uninformed.

I am sorry that you found yourself in trouble in this very serious matter.  The best path, of course, is to commit yourself to your education and make an effort to choose your friends and associates with great care.  From what you wrote, I get the impression that perhaps you were “just along for the ride,” so to speak, but wound up in the same trouble as the responsible party.  Perhaps, since you are still a minor, you can try to learn from this mistake rather than getting further into trouble.

I know it can be really tough sometimes to avoid the “wrong” people, but obviously, you can see that some people are just bad news, I’m sorry to say.  It’s not that I don’t think they also deserve compassion and a chance to start over, but it’s true that some people will choose trouble every chance they get.  I hope you will make other choices.  You’re very intelligent, and (something which you probably didn’t know), you passed the California High School Exit Exam.  So, you should be graduating in just two years.  Whether that happens or not will depend a lot on your next choices, including with whom you choose to associate yourself.

I suggest that you get a “straight” job, such as a restaurant or in retail or construction and when you’re not working, devote yourself to things which develop your mind, spirit or body, such as the art and weight-lifting I know you’re already interested in.  Every choice you make brings you closer OR takes you further away from a “good” life as an adult.

Good luck, Lam. You are welcome to return in the fall.  Let me know if I can help you in any other way.

When we corresponded later that summer, I tried to help him enroll in a summer carpentry class at Laney.  I look back now and feel my response was inadequate, and for whatever reasons, I did not really give him the tools to help him get off the gangbanging track.