GUNS Part I: When in Rome… Stay Strapped!

Gun violence is rocking our city. But at Oakland Voices, not everyone agrees on whether or not owning them creates or feeds a culture of violence, or if it’s just smart self-defense. Two of our correspondents have very different perspectives on the need for guns in our homes and society. Here, one has his say. Click here for Part II by Debora Gordon. 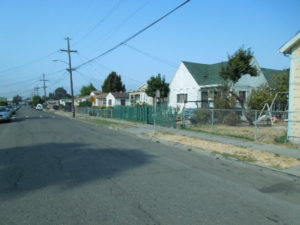 The 1100 block of 84th Ave, where an Oakland resident was pistol whipped during a home invasion robbery last July. I’m sure the victims wish they had been strapped that fateful morning! Photo: Michael Holland, Oakland Voices 2012

With gun-related crimes in the news nightly, it might seem hard to understand why someone would support the Second Amendment. But I do.

Living in Oakland I have seen many crime scenes. When the yellow crime tape comes down, the make-shift memorials sprout up. Time and time again The Tribune has been the bearer of the bad news.  If you live in East Oakland, like me, you have probably heard or seen gunshots. Sometimes not just ordinary gunfire, but bursts from semi-automatic weapons. Spooky stuff.

A run-in with an assault rifle in 1999 convinced me it was time to get strapped.

On the Friday before Mother’s Day, I was doing a side job in Oakland through a temp agency. I reconnected with an old childhood friend from Bayview-Hunters Point. It was good to be in Oakland and see one of my old Police Athletic League pals.

We worked together at a construction site and when the day was through, I followed him in my truck to his crib where we planned to knock back a few beers. He drove a Benz with dealer plates. When we reached his house on 88th and Hillside I couldn’t help but notice he had a matching Mercedes wagon.

I asked why he was working for a temp agency, doing mindless menial labor, when he had two sweet rides. He changed the subject and led me into a barely furnished house. As he opened the fridge, I noticed that he had no food. Just a brown paper grocery bag and a 24-pack of beer. He pulled out two and we started catching up. He and I had some good times playing Little League.

On the counter I observed numerous boxes of baking soda.

Now, I’m no Babe in the Woods. Baking soda, Benzes – where I’m from, those equal dope dealing. I tried to play it cool and act like I wasn’t a three strikes candidate, which I was and still am.

I began wrapping up the walk down memory lane when all of a sudden the front door burst open with the loudest thud I have ever heard. My mind thought police, but my eyes saw something much worse: two unmasked black men who seemed to be ten feet tall with the door crashing down under their feet.

My mind and body froze. I wish I could tell you that I was dashing and daring as I fended off the burly bears, but it didn’t go down like that. All I could do was fix my lips to say “Please, my brother.”

“Lay down!,” a voice yelled out from behind the two. He was a smaller black guy, also unmasked. The implications of unmasked robbers was this: they had no intentions of leaving witnesses.

The smaller of the three did all the talking. And rightfully so. He he had an assault rifle the size of tricycle. I later found out that it was an AR-15.

“Where’s it at?,” he demanded. My friend balked and remained silent. As we lay on the floor the one standing over me walked to the kitchen, opened the fridge, and inspected that brown bag. He gestured to the others. I’m guessed that he’d found what they were looking for. They stepped over us and the door before stealing away into the afternoon.

Nearby Castlemont High had just let out and I could hear numerous voices outside. We stayed on the floor in awkward silence for what seemed like an hour.

Looking back on the entire situation I realize that the feeling of helplessness is what made me so scared. Like most men I would like to fancy myself to be a quick moving, strong bodied, fighting machine. But when that door crashed open, I was like a damsel in distress!

“If only I’d had a gun” is a thought that has run through my mind from time to time since the invasion. Maybe I could have been all heroic and defended the honor of The Bayview Junior Giants.

Or maybe the intruders would have seen the gun and gotten trigger happy. Maybe I could have wounded them and held them until the cops came.

So many possible scenarios. But one thing is for sure:  guns speak volumes! Having one trumps not having one every time.

Soon after that invasion, I convinced my girlfriend at the time to go to a gun store in San Leandro and purchase a pistol for the house. She didn’t have a record so in a short period of time we were the proud owners of a brand new Glock .40. We cared for it like it was a luxury car.

Thinking about my Glock now, I’m seeing another possible scenario had it been with me the day those guys came by for a visit. Maybe I would have lost the shootout – costing both me and my friend our lives. Or they might have just seen my gun and shot me in the head, leaving all my thoughts on the floor of the stash house.

But it would have been worth the risk, just to have the power to try defending myself. I can’t stress enough how powerless I felt cowering on the floor.
But after we got back from the gun store, having a rocket in the house made me feel like like Charles Bronson. I felt like all of the drama from The Murda Dubs – the area around 23rd Ave. in East Oakland – couldn’t affect us.

That is a good feeling.

Now, you may say my buddy had it coming to him. When you play the game, sometimes you lose. That’s true. But my point is, in Oakland – as in many other cities – the drama can come to you even when your hands are completely clean. And I’d rather have something in mine to defend myself when the drama comes.

Because today, doors are still being kicked in. Not all of the doors being kicked in are stash houses. Some of those doors have hard working everyday people on the other side – people who are trying to protect their family and their property.

Adding to the problem is the recent rash of home invasions. And trust me when I tell you that the people committing these crimes are armed. Strapped.  And nothing can put the fear of God in you more than a burner being stuck in your face.

Although I haven’t been in prison for nearly twenty years, I still can’t own or posses any weapon of any form. But living in Oakland you can bet your bottom dollar that my house is protected (wink wink). And judging by the shots fired every New Year’s Eve, I’m surrounded by a whole lot of guns.

When in Rome, do as the Romans do. And when in East Oakland, when your door gets kicked in, wouldn’t you rather rely on your own aim than the Police response time?

When in The East, do as the Oaklanders do: stay strapped!